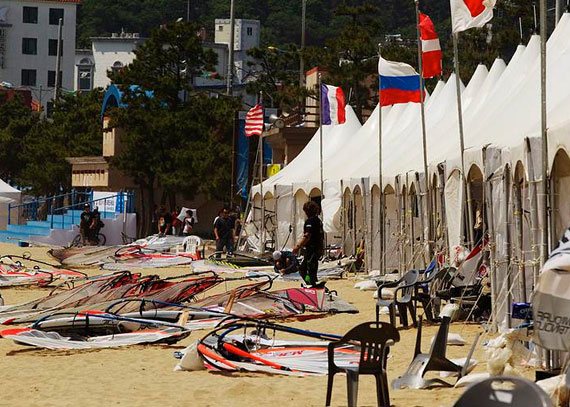 The latter half of the competition period in Korea was forecasted to deliver some classic slalom conditions, and the event’s fifth day certainly didn’t disappoint. With the East Sea groomed by a typically gusty 7-20 knot breeze, first on the day’s agenda was to complete some unfinished business left from day two; the men’s losers final and women’s finals from elimination two. 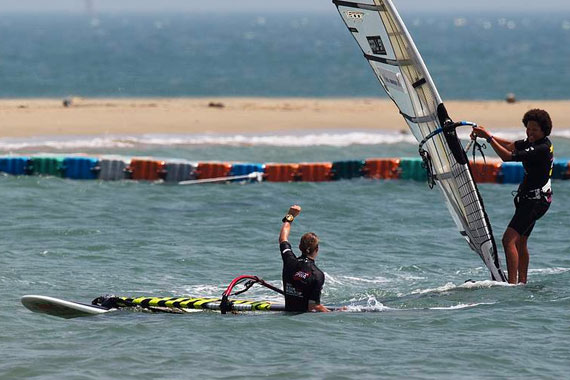 Opening the day’s action, Björn Dunkerbeck drew first blood in the men’s losers final, rewarding him with ninth place in elimination two. Similarly, over in the women’s fleet, France’s Lise Vidal stepped up her game to steal the first winner’s final of the day from under the nose of a chasing Sarah-Quita Offringa. That left Valerie Arrighetti to take third in the heat; another consistent result for the event leader’s stash.

Rolling seamlessly into a third race elimination, Peter Volwater found an apt way of describing the typically up and down Jinha beach prevailing wind, “the wind’s like Swiss cheese out there man!”

In super challenging conditions, it become apparent that choosing the correct equipment was vital, however, with a wind varying up to 15 knots over the race course, this wasn’t going to be the easiest of challenges.

Very much on the right gear was Antoine Albeau who, despite falling at the first gybe mark in the second round of heats, managed to catch up the best part of a reach with some turbo charged drag racing, to sneak into the fourth position qualifying position. 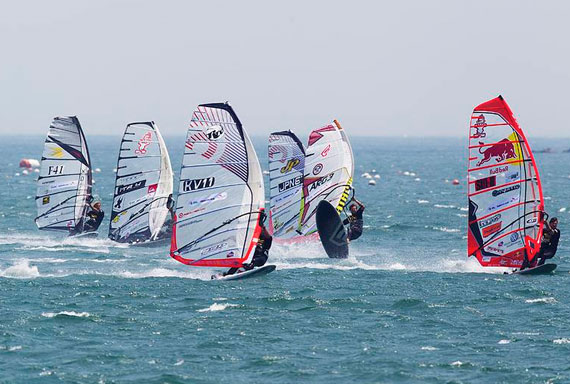 Gusts up to 30 knots made it hard to control the equipment - Pic: PWA/John Carter

Moving into the semi finals, Volwater had a costly error when he crossed the start line early in his heat, moving him into the losers final after a perfect run of first place finishes in the elimination up until then. Falling to the same fait, Argentina’s Gonzalo Costa Hoevel was equally eager with his start line antics in the second semi final, forcing him to join Volwater in the loser’s final without a shot at sailing the heat.

In that loser’s final, Volwater sailed a solid heat to lead the pack to victory and ninth place in the elimination. Trailing him, Antoine Questel finished in second and Jimmy Diaz placed in third.

The men’s winner’s final of elimination three proved to be a turbulent affair. Firstly, both Dunkerbeck and Micah Buzianis false started, forcing the heat to be rerun. The subsequent rerun then fell victim to the gusty local wind, and had to be cancelled and then re sailed a third time before a result was secured. When crunch time came, Angulo came hot out the blocks, only to fall at the first gybe and have his chances of catching the fleet crushed as a wind hole followed him down the second reach.

At the front of the pack, Ben Van Der Steen pieced together a master class in slalom racing as he led, unphased by Albeau’s presence on his tail, and was ultimately rewarded with the elimination win. Albeau was never far behind in second, and Cyril Moussilmani added another solid result to his collection in third. 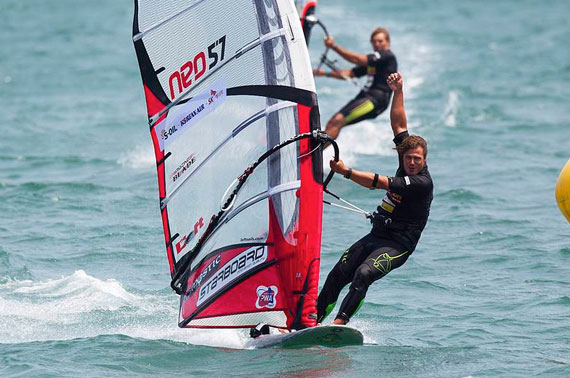 In the women’s third elimination, Vidal showed her pervious race-winning performance was far from a flash in the pan, when she sailed a perfect elimination to win the race in truly domineering fashion. Behind her, the super consistent Arrighetti consolidated her event lead with yet another podium finish in second, and Offringa added to a similarly consistent run of results in third. Over in the losers final, the show was stolen by Japan’s Fujiko Onishi, her best result of the event so far.

With the afternoon wind becoming increasingly gusty, the fourth men’s and women’s race eliminations were started, but unable to secure a result, as conditions halted progress at the semi finals. 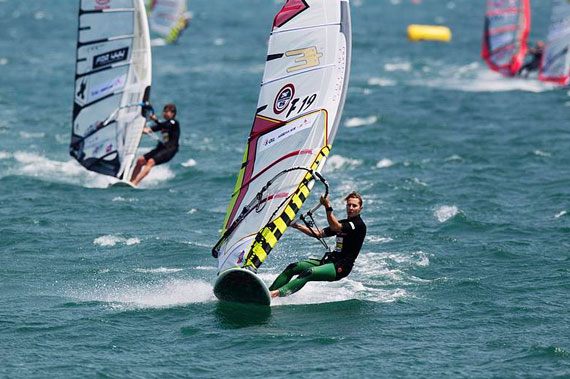 With the races completed thus far, that leaves both Albeau and Arrighetti still sitting at the top of their respective fleets with two days left of the event to run. Ample wind on the radar points to an explosive end to this already awesome showdown.

Tomorrow morning’s skippers meeting has been scheduled for 10.00am, with a first possible start at 10.30am. Be sure to follow all the action from day six in Korea from then onwards.