On the second day of the PWA World Cup in Ulsan at Jinha Beach, the first race could be finished and from the second one the men´s losers final is missing and women´s losers and winnersfinal.
With the wind blowing from the prevailing southwest direction, both the local thermal, and venturi effect soon had the forecasted 12 knots of breeze accelerated to a gusty 25 knots, setting the stage for some classic slalom action. 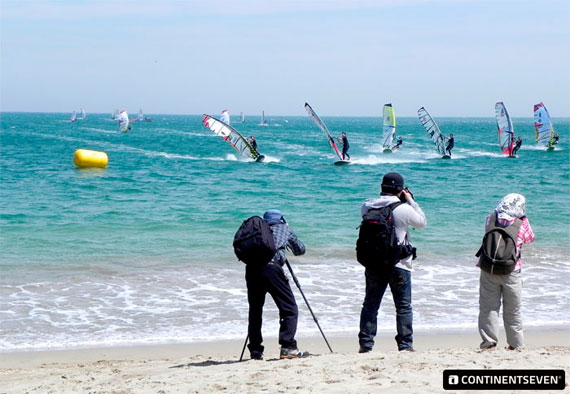 Picking up the baton where it had been left off the previous day; first on the agenda was to finish the incomplete men’s race one elimination. In typically challenging conditions, with winds gusting off the headland between 10-25 knots, the first round was completed without major upset.

Entering round two, the first to fall were the UK’s Ross Williams and Holland’s Pieter Bijl, who both false started in heat 12, crushing their hopes of advancing further in the elimination.

Cue the semi finals, and a similar error from France’s Pierre Mortefon had him fast tracked to the loser’s final, a real blow for the French sailor, who was looking strong throughout the previous heats. In that loser’s final, Australia’s Steve Allen proved to be the man to beat, after he dominated to secure ninth place in the elimination.

Over in the winner’s final, it became apparent how hard the pack were pushing for a good start when Finian Maynard, Ben Van Der Steen and Julien Quentel all went over early, leaving Bjorn Dunkerbeck to seize control of the depleted heat and lay claim to the event’s first race elimination, ahead of Antoine Albeau in second and Arnon Dagan in third. 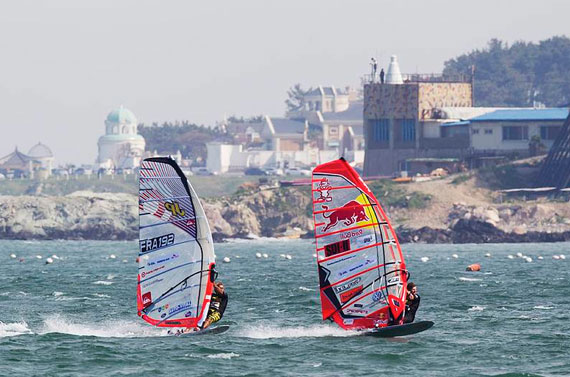 RACE 2
With barely a moment for the sailors to get their breath back, the second race elimination was kick started in similarly gusty afternoon winds, blowing between 10-18 knots. After the opening heats passed without major incident, Micah Buzianis will likely have been kicking himself when he uncharacteristically failed to advance through to the semi finals.

In the semi finals, Dunkerbeck lit up the racecourse with a mad dash to the finish line with Cyril Moussilmani, sadly however, it didn’t reward him with a place in the winners final, but it did produce without doubt the best race finish of the day. 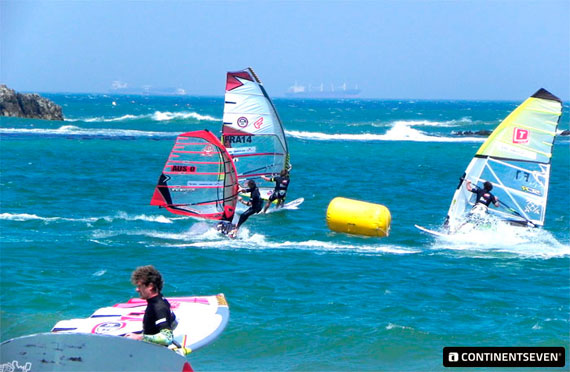 With only enough wind to sail the men’s winners final, Mortefon proved to be the man to beat, after he clearly set his sights on making amends for his earlier false start. Stellar racing from him rewarded his efforts with elimination victory. Cyril Moussilmani chased in second, and Antoine Questel took the remaining podium position in third.

Over in the women’s fleet, there was only one race elimination completed before the wind became too light to continue. In that race, Valerie Arrighetti produced a faultless performance, finishing first in the qualifying round, and then repeating the feat in the subsequent final, to secure the elimination win, and early event lead. In her wake, she left Aruba’s Sarah-Quita Offringa in second and France’s Fanny Aubet in third. 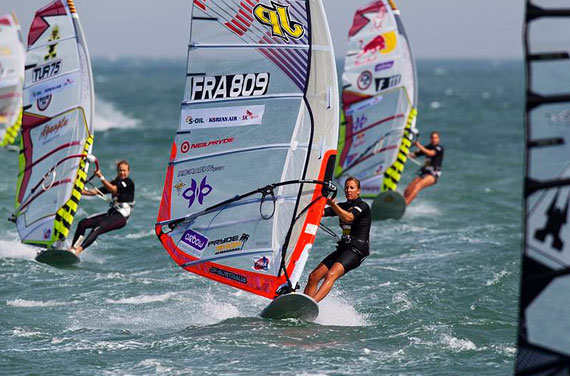 Wind permitting, tomorrow’s action will kick off with the remaining men’s losers final, and the women’s finals before a third race elimination is started. Proceedings are scheduled to begin from 11.00am, after the morning’s 10.30am skippers meeting.