Day 5 saw a thrilling final at Pozo Izquierdo in the double elimination. Again the wind was blowing with 40 to 50 knots mixed with medium onshore waves. The wind was a bit lighter compared to the previous day, what allowed the riders to risk a bit more in jumping. Philip Köster and Iballa Ruano Moreno impressed most and took the this year´s titles at Pozo. 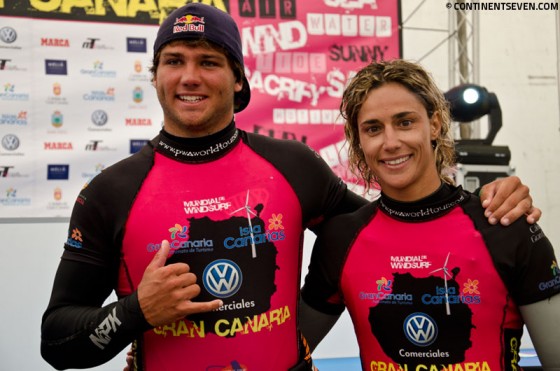 Philip Köster and Iballa Moreno are the winners 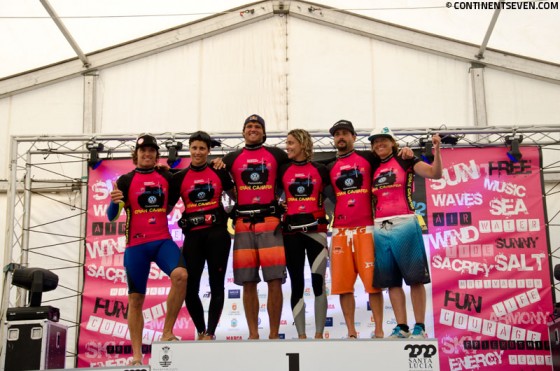 The top 3 men and women

This year, we saw the same two riders in the winners final as last year: Philip Köster and Victor Fernadez. The final started and Philip opened his heat with a Double Forward. After once sailing out, Victor decided to change his equipment to a smaller set and changed from the 3,7m to 3,4m sail. “Yeah, it was so windy and the change was the right decision, as I felt too much overpowered while jumping!”

Köster had a great heat, as mentioned before, he started the heat with a good Double, crashed a Goiter, nailed a massive Backloop, had a clean waveride with a Backside air but did not land the wave 360° very clean. After this Philip cranked up the level: Backside 360° Taka combination mixed with a waveride, a massive Backloop, which deserves a highscore, a perfect Wave 360° followed by a Taka in combination with a waveride, a tweaked Backside Air, a clean stalled Double Forward, a Wavegrubby and a waveride with a 360°. 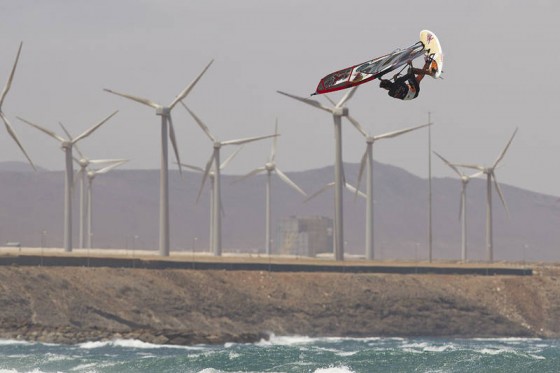 Victor crashed a Forward, changed gear to 3,4 and nailed an excellent onehanded Backloop quite close to the shore, not very high, but with a lot of style. Directly afterwards he landed a Double Forward in waterstart position and a really high Backloop. On the way in he had a waveride with two nice Backside turns and a Goiter, with a not clean landing. That probably cost him important points. Again on the way out he landed the highest Backloop of the day, pumping the sail in the air several times to get some extra height. On the next waveride he went for a wave 360°, but finished the move behind the wave. A big stalled Forward was the next move and impressed every body at the beach. Now Victor tried to go for something new on his waveride and went for a clew first Goiter, which he crashed. On the way out he landed a big onefoot onehand Backloop. High score on the jumping again, but a high waveride score was still missing. On the next wave, he started great with a tweaked Backside air and a Goiter, both landed perfectly but he tried to do a Taka directly after the Goiter, which he crashed. So, he missed again to score high. On the next wave Victor tried the a clewfirst Goiter for the second time, but crashed again. In his last waveride he crashed a wave 360°. 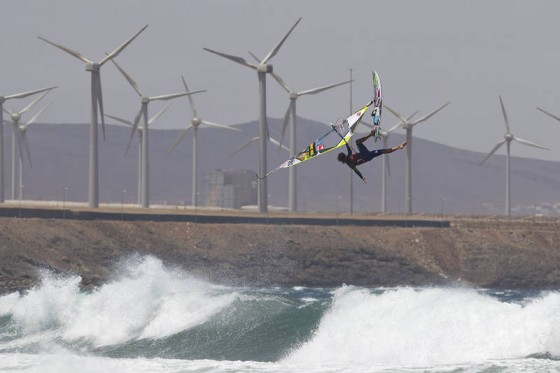 Out of our view Philip had a really big heat landing almost all moves in perfection. Victor´s jumping was great, but he lost too much ground in waveriding. Philip had the perfect Backside 360° Taka combination and landed a perfect wave 360°.

The 18 year-old Philip wins Pozo for the third time and will arrive as the PWA wave tour leader at Tenerife, where the next PWA even will start soon. Victor improved a lot from last year and had definitely a chance to be on top of the podium. Today he just missed to land his new tricks in the waves. “My plan was not to go for the normal stuff. I wanted to try something new and risk a bit!”

Like in the previous years, Philip and Victor were the stand-out sailors in the men´s category and the top 3 result of the men did not change compared to 2011. Dario Ojeda, a real Pozo local, completes the podium in third. He was able to improve in wave riding and jumping during the last year and won his heat in the Double Elimination against a very strong sailing Robby Swift. In his heat against Dany Bruch, Robby landed the best Pushloop Forward of the event. Robby Swift won against Klaas Voget, Marcilio Browne and Dany Bruch, and everything with an injured toe. Only Dario Ojeda was able to stop his comeback through the Double Elimination. In the end Robby finished 4th and improved by 3 places compared to 2011. That´s a great comeback after his foot injury last year. Congrats! Dany Bruch finished in 5th, lost one place from the single, but improved compard to 2011 by 4 places in the ranking. He is already on the way back to Tenerife to organize everything for the upcoming PWA event there. 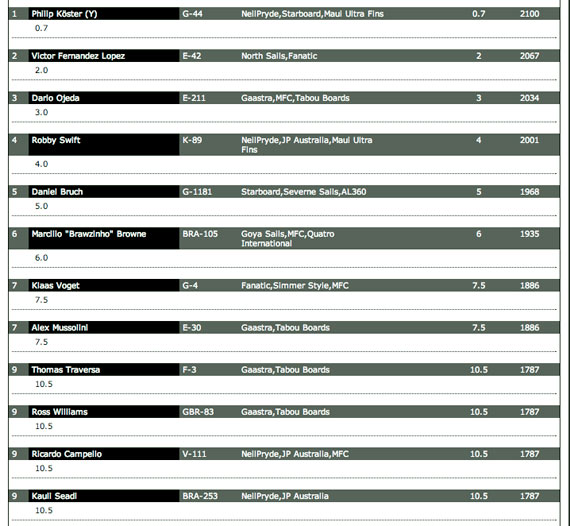 In the women´s final we saw again Daida and Iballa Moreno. Both are exceptional sailors, who have been dominating the women´s wavesailing for the past decade. This year, they were not only at the beach to compete, but also to run the whole event.  In the final of the Double Elimination, Daida won against her sister Iballa, so the sisters would have to sail again to settle the title once and for all.

In the superfinal, after landing a Pushloop and a Backloop, Iballa concentrated more on her wave riding and did the best Frontside Aerial of the day.  Daida´s waverides had not the same technical difficulty as Iballa´s rides. Daida also missed to land her big jumps properly. In the end it was not enough for Daida and Iballa won the event in Pozo for the first time. 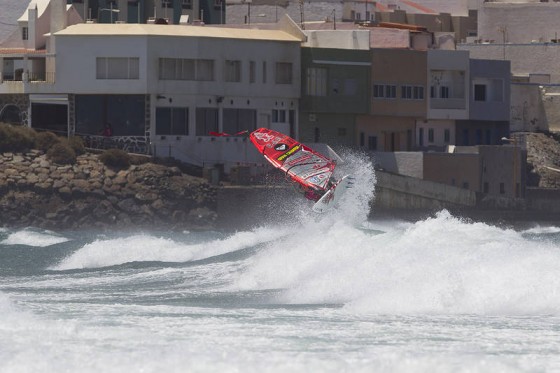 Karin Jaggi defeated her third position from the single elimination against Steffi Wahl, who made her way through the Double Elimination. She was the only girl using a 3,3 instead of a 3,0 and impressed with solid waveriding. However Karin was sailing better. She landed a perfect Forward, a really high Pushloop and she was just milking the waves. 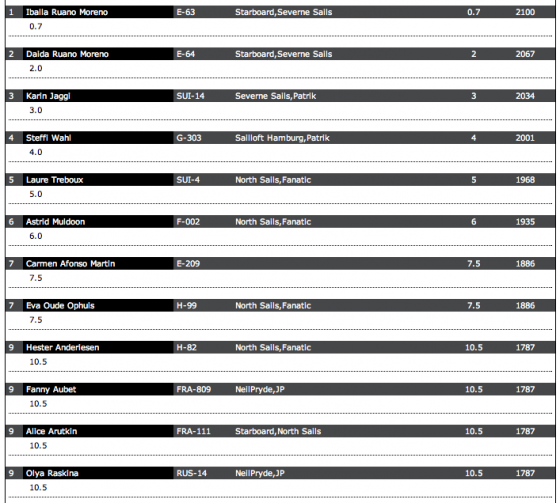 […] Moreno impressed most and took the this year´s titles at Pozo. You can read more about day 5 here.But watch now this great video full of action:Gran Canaria Wind and Waves Festival 2012 – Day […]