Read a recap by Matthew Pryor, the international Press officer at the PWA KIA Cold Hawaii event 2013, about 17 year old Moritz Mauch, NorthSails and Starboard rider, making it through the trials and the first round against Dany Bruch from Team Starboard/Severne , who is one of the best wave riders on tour and recently qualified for the top 4 in the super radical Red Bull Storm Chase event.

Having come through a grueling pre-qualification minutes before to make the main world cup field of 32 riders, Mauch revealed why he gave up and came in before his heat with Dany Bruch, the 32-year-old Tenerife-based German, had finished.  “I went out and tried to do a good heat, but sadly I had really strong cramps and I had to get out of the water five minutes before it had finished,” Mauch said. “Somebody said to me: ‘what are you doing? you’re winning the heat, you’ve got to get out there.’ But I couldn’t move. I sat on the beach and then somebody told me that I’d won and I jumped up and couldn’t believe it.” The judges scored Mauch’s best two waves combined as 9.5 to Bruch’s 8.75. 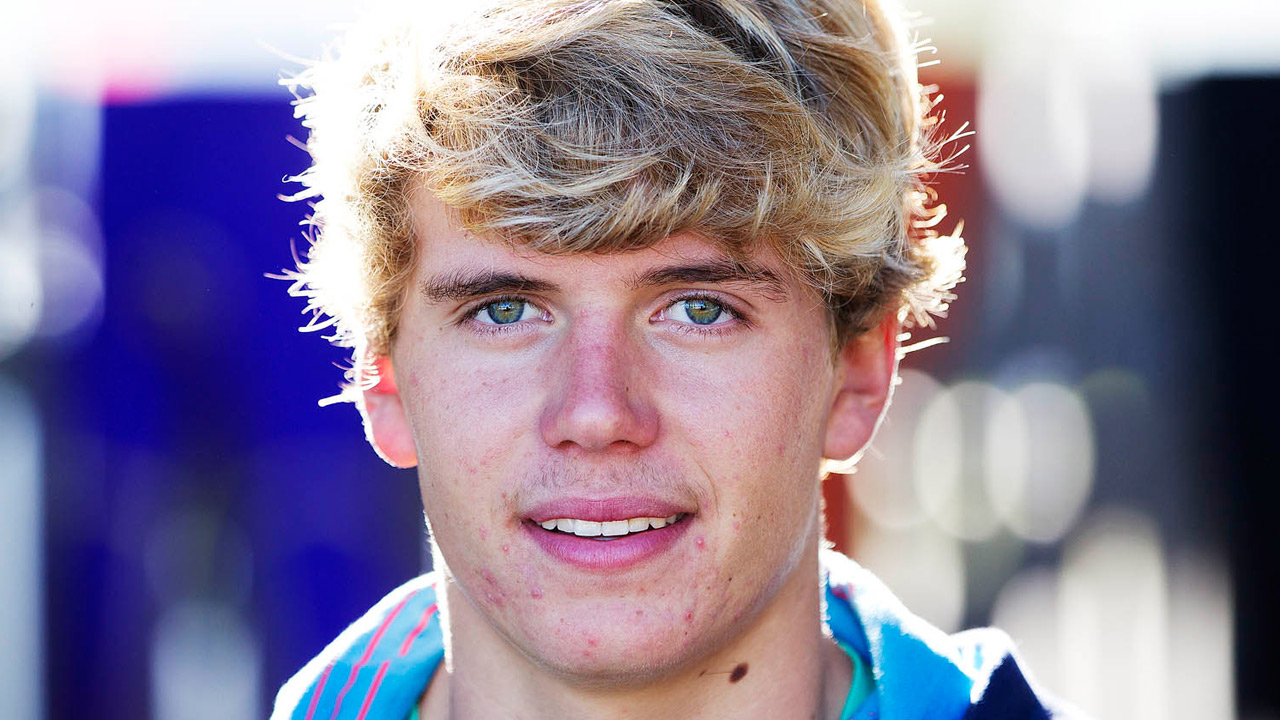 Moritz Mauch in Denmark 2013 by Carter/PWA

But it was not a shock to many of his fellow riders. Alex Mussolini, the world no.3, who also lives in Tenerife, knew Mauch would be dangerous in the wave-riding conditions.  “I didn’t think it was an upset, if you’re inside the windsurfing world we all know him and we all know how much potential he has,” Mussolini said. “He had a great heat. Dany is really good, but Moritz is really good and in these kind of conditions, with no jumps and waves here and there. He’s a good rider and we know when you’re 17 you have a lot of fire in your blood and a lot to show, a lot to win and nothing to lose.”

John Skye, the British rider based in Gran Canaria has seen Mauch emerge in Pozo. “When everyone else is out there jumping he’s riding, riding all day long,” Skye said. “I’ve got to be honest, Moritz grew up always together with Alessio  Stillrich, whose here and “Pablito” Pablo Ramirez Bolanos, whose not – they were known as the three amigos – and if I’d put money on anyone doing something like that at a PWA World Cup it would have been Alessio. But with the weather conditions at the moment and not having jumps it couldn’t have been more Moritz’s day. But at the same time Dany is a great wave rider, if there had been one person I wouldn’t have wanted to face yesterday it was Dany.” 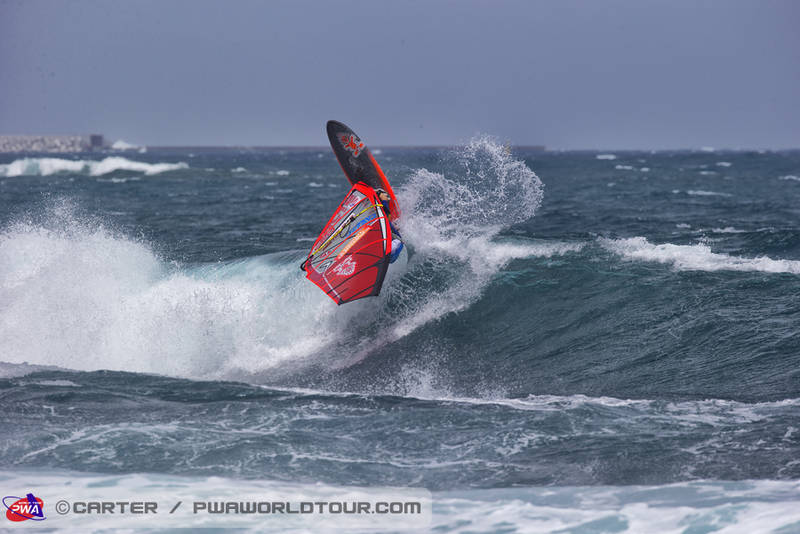 Dany with a powerful frontside Wave 360 at his homespot Cabezo

Mauch has German parents, but was born and raised in Telde near Pozo, Gran Canaria.  “I was born in Gran Canaria but my parents are German, I’m not Spanish, I’m not German, I would say I’m Canarian.” His father Claus runs the Club Mistral water sport school in Bahia Feliz and Mauch, who is also German SUP champion,  started windsurfing at the age of six. “Moritz was the wave rider from the beginning on. He never was so much into jumping.” Claus explained during several conversations.

He has also broken the Pozo mould, which normally produces jumpers, like Björn Dunkerbeck, Vidar Jensen, the Moreno Twins, Dario Ojeda, Jonas Ceballos and many more. One of the youngest jumping talents is Alessio Stillrich. But Moritz is different.

“In Pozo it’s perfect conditions for jumping, but I don’t like to jump, I like to surf, now it paid off,” Mauch, who counts wave guru Kauli Seadi as one of his heroes, said. “Four years ago I broke my ankle and a bone in my foot. I was four months out of windsurfing. It happened on a jump, so maybe that is why I’m not jumping. I am going to start jumping now though, if not, it’s going to be really difficult to live as a pro.”  And we witnessed several radical jumps during the kids events on the Canarian PWA events. Forwards, Push loops, Back loops and nice air moves off the lip. 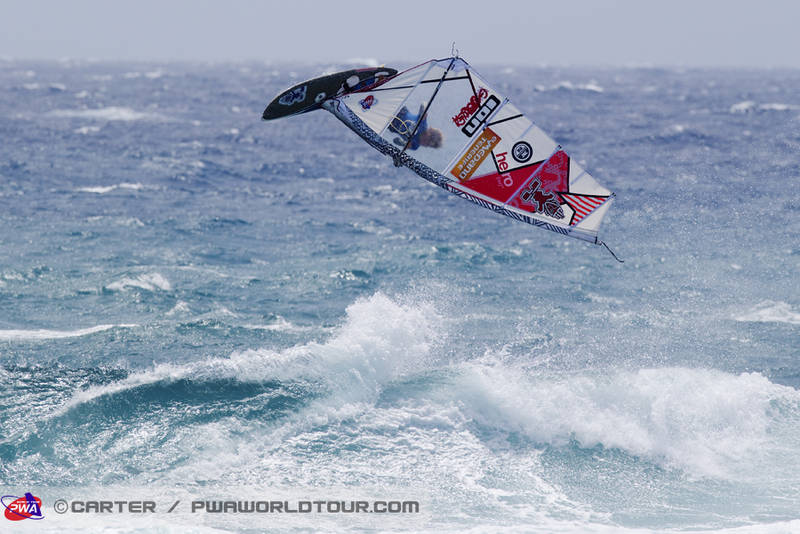 Moritz can jump, here with a Pushloop during the kid’s competition on Tenerife

In his first PWA World Cup competition out of the Canaries, Tuesday’s was the biggest of Mauch ‘s life and with 20-knot plus onshore conditions forecast for Saturday – the same wave-riding conditions which saw Thomas Traversa beating Philip Köster last year, Mauch could go much further. When the wind is really light and the waves are mushy he has an advantage as he is used to it and light. He is much closer in weight to 60 kg light Thomas than 90 kg Philip Köster, who still performs great in lighter conditions.

Bruch has not given up though and he enjoyed some small revenge as the impromptu SUP contest yesterday saw them both reach the final, which Bruch won. “It was good to win, I probably had an extra bit of energy after feeling a bit down after what happened yesterday,” Dany Bruch said. “I didn’t really agree with the judges scoring, but it’s tough and lot of times you think you’ve done well but you don’t really see what the other person has done. We’re good friends and we’ve done a lot of surfing, sailing and SUPing together. So it’s all good. If we get the weather I can make it back for sure.” 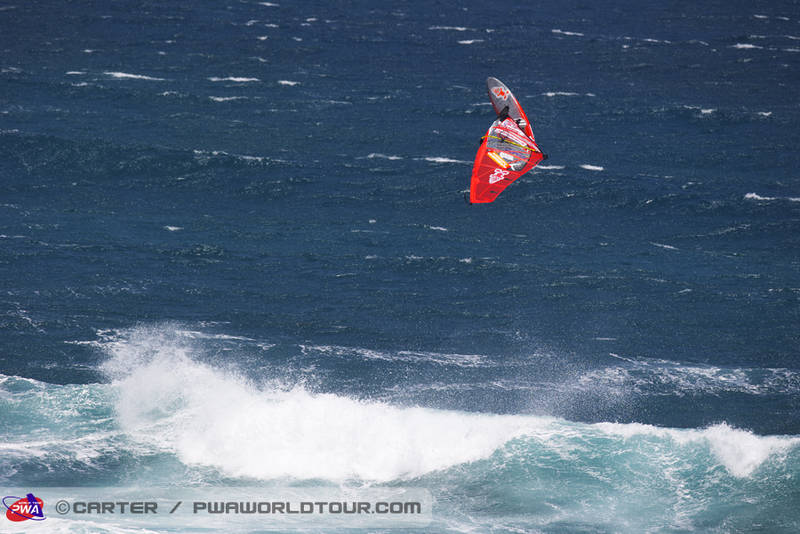