Levi Siver wins the Single Elimination of the Aloha Classic in front of Kauli Seadi and Bernd Roediger.  It was a really tight final and Levi managed to win with only 0,02 points ahead of Kauli Seadi.

“You know we are here with the best people in the world at the best beach in the world and Ho’okipa went off today! I just tried to give it my best and try not to think too much when I was out there. I just wanted to have fun, enjoy it and keep improving. Like I’ve already said I was really competing the whole time, I just told myself that I want to enjoy it. At the end of the day we’re all friends who love this sport and I think we should keep that spirit of Aloha, and just keep encouraging each other. I’m feeling really humble, there’s so many good sailors and they are all first place in my eyes, they all rip so hard! Thanks to everybody!” (Levi Siver)

32 of the best wave sailors met on Monday, October 28th to fight for the win in the Single Elimination of the 2013 JP PWA Aloha Classic. Many different styles faced each other in 15 exciting heats. The first round saw a few early outs of big names and PWA title contenders like Victor Fernandez, Thomas Traversa or Philip Köster. Levi Siver, Bernd Roediger, Morgan Noireaux and Kauli Seadi made it to the Single Elimination final and they kept off the pressure of former world champions like Kevin Pritchard or Josh Angulo.

None of the finalists was in the final by mistake. Siver opened with two aggressive hacks and a trademark tweaked aerial – a wave that wouldn’t count in the end, but a strong start all the same – whilst Noireaux boosted an aerial of his own and a backup slash. In the meantime Roediger combined a couple of setup turns with a sleek one-handed aerial, whilst Seadi bided his time by tacking off his opening wave. The three-time world champions patience was soon rewarded though as he racked up the highest scoring wave of the heat, consisting off a huge aerial off the critical section, which he then backed up with a gouging turn which broke out the fins before adding a couple more of his trademark, fluid hacks. The Brazilian was leading the heat right until the final moments, as he showed off more of his super fluid riding, but with all three of the remaining riders in contention it was a precarious position to be in. Levi Siver upped his game as he hunted out a mast high bomb. The American then delivered one of his stunning trademark aerials and a couple of turns, which sent the spray flying by the bucket load. Roediger and Noireaux were also going for broke at the same time as they attempted air takas and frontside wave 360s respectively, but ultimately it was Siver who stepped up to the plate. On his final wave of the heat Siver lined up the critical section to launch into a frontside 360, which he claimed, before delivering another gouging turn. With no time remaining Seadi tacked onto the final wave of the heat and rotated through a perfectly executed goiter, but it wasn’t a counting wave for him, which left for a nail biting finale. The result proved to be almost inseparable with just 0.02 of a point in it, much to the delight of Siver it was soon revealed that he had clinched the single elimination victory from under the nose of Seadi, whilst Roediger and Noireaux finished in third and fourth respectively.

With such an incredibly loaded first round we saw some early upsets. Right from the word go the PWA regulars began to fall, firstly with the likes of Ricardo Campello and Klaas Voget losing out to Kevin Pritchard and Russ Faurot, who made an impressive debut on the PWA World Tour. In the very next heat the 2010 PWA World Champion – Victor Fernandez – was the next big name to fall as Kauli Seadi returned with a vengeance in his first PWA event of the year, and the AWT JP Aloha Classic champion Bernd Roediger prevailed in a tightly fought contest. Robby Naish’s return to the competition scene for the first time since 2000 resulted in him narrowly missing out in the next round. Alex Mussolini pulled it out the bag to knock Naish out with an exquisite frontside 360 right in the pocket of the wave. The current top ten in the world weren’t safe there either as Thomas Traversa, Leon Jamaer and the reigning world champion and current world tour leader Philip Koester all took first round exits, and they’ll now have to wait for the double elimination to start their fight back. 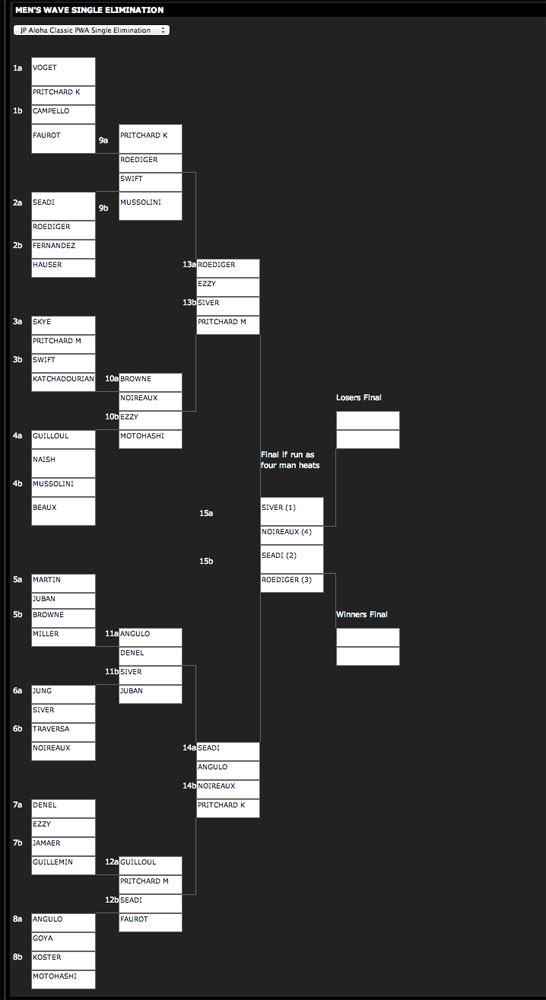 Ok powered my brain on 🙂 – now its a bit clearer. It’s seeded so that in every heat there’s two positions of 17 and 25 from the single. What makes sense to get a clear result. But still its a real hammer that Köster, Ferndandez and Campello are in one heat.

this elimination ladder doesn’t make any sense to me.

I agree, can someone explain it, please.

This is the AWT system, which in our opinion seems to be a bit more fair compared to the PWA system. All 4 sailors sail against each other, the best two advance and the riders get set criss-cross (don’t know the right word for it). Like this the fleet gets mixed up more.
Of course, it is harder to read, if you did not follow the competition, as you don’t see immediately who advanced.

Hi, i would have prefer the pwa system just to insure consistancy thru the season, why just in hawaii they change it? Man on man is more intense in terms of pressure as you can follow your direct opponent and steal waves from him it is a different strategy, 4 men heat looks like an expression session with scoring system, every surf event is based on man on man at a high competion level (pwa, wct) 4 men heat is used for “lower” level comps (awt, wqs) or when you need to go thru a ladder with lots of competitors… Read more »