With a 5:0 decision Kiri Thode also wins the double elimination on the second day at the bay of Mui Ne in Vietnam. 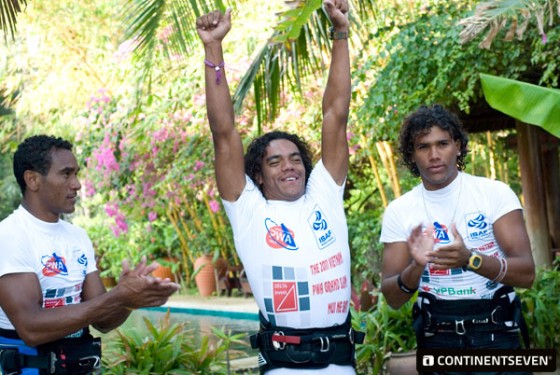 Video of the announcement of the winners

On the second day the wind kicked in a bit later than on the first day and the double elimination got started in the early afternoon. In conditions mirroring the single elimination, competition got underway in a steady 25 knot cross onshore breeze, with moderate sized chop over most of the sailing area. Most of the sailors were on 4,5 to 4,8 m big sails, some used smaller sizes.
First to mount their attack on Thode’s thrown was Israel’s Yarden Meir from Eilat, who looked defiant as he toppled Tilo Eber and Russian heavy weight Yegor Popretinskiy in a very close decision before finally succumbing to the skills of Canadian Philip Soltysiak, and settling for a well deserved ninth position in the double elimination. 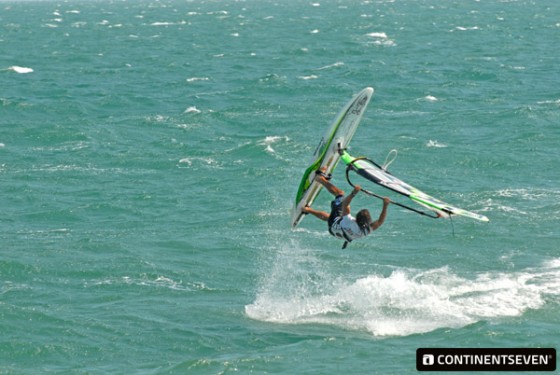 On the opposite side of the draw, Anthony Ruenes bulldozed his way through his opposition with some stunningly executed moves, leaving Arthur Pollet, Max Rowe and Davy Scheffers in his wake before conceding to European Champion, Steven Van Broeckhoven. Ruenes’ run meant he settled in seventh position, an impressive come back after bowing out in the second round of the single elimination. Well done Anthony. In the heat against Steven the wind was a bit lighter and Anthony had not enough power. 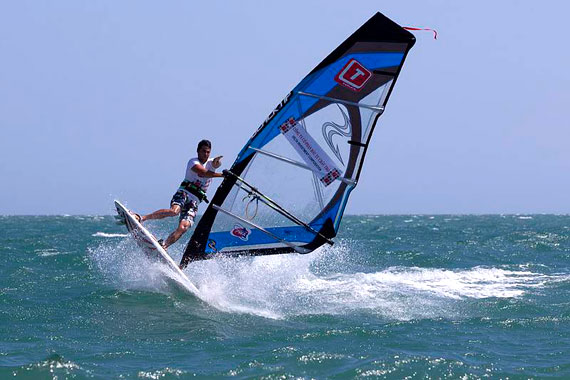 With Phil Soltysiak falling at the hands of Dieter Van Der Eyken – Dieter landed as the opener an incredible high fully planned Kono (perhaps the move of the day), there was an all Belgium showdown as Van Der Eyken went on to face compatriot Van Broeckhoven. The super charged heat went down in testing conditions, and despite Van Der Eyken’s spell of form, he could not match the impressive magnitude Van Broeckhoven was exerting in his moves. Dieter landed suberb moves just in front of the judges, like a perfect Kono and a Toad. It looked like he could fight the European Champion down. But Steven Van Broeckhoven proofed, that he is not without a reason the number one in Europe, kept himself upwind and landed a perfect Airfunnel just in front of the crowd and judges in the end. Dieter sailed too far downwind. Steven advanced in a very close decision against young Dieter, who has a big career in front. 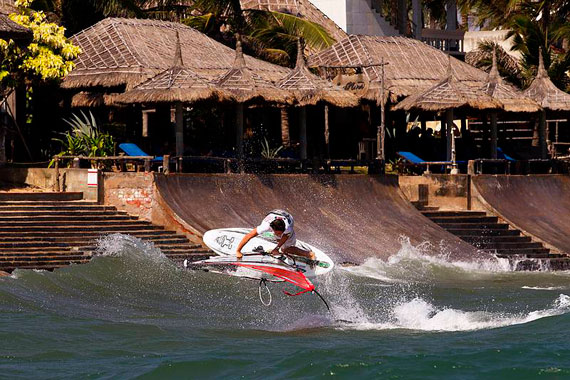 Steven had to take on Tonky Frans, meaning the final heats of the double elimination would be a carbon copy of the previous day’s heats. Dieter finished the day in great 6th position, which is so far his best result.

The sailing standard had been impressive through out the day, but the Tonky Frans vs Van Broeckhoven stand-off would raise the bar to dizzying new heights. The pair put on a freestyle master-class of Culos, Ponch 360s, Shakas and Konos in a heat that had the judging panel’s work cut out. Sadly for Van Broeckhoven he couldn’t make amends for his previous day’s loss to Frans, and for the second time he fell to the Bonaire style maestro. Perhaps he missed some wind. But Tonky was on fire and nailed sick moves in front of the Judges and spectators in between his heats. And that´s his trademarka and makes him worldwide known in the windsurfing scene and as well extremely popular. It also looked like he was much more relaxed compared to day 1 – he had a long travel and less sleep – and he could control his new twin fin freestyler much better and smoother. Tonky´s new style on twin fins looks really fresh and a bit more aggressive, we would say. 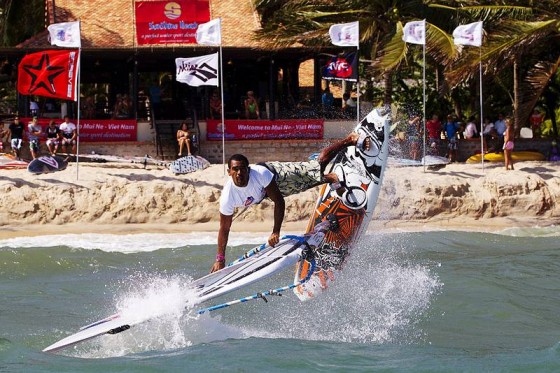 So once again, there followed a Frans vs Frans showdown for the podium. From the beach Tonky was the more polished of the sailors, but Taty proved to be the more competition savvy, filling out his score sheet with a mix of both aerial and sliding moves that trumped his sibling’s styled out, but ultimately less calculated efforts. He landed some double combos and scored through them excellent points.??Taty moved on to try and avenge Gollito Estredo for his previous day’s loss. The heat started badly for Taty, who failed to stick a clean move for the first couple of minutes. In the meantime Gollito was methodically working through his routine, and filling out his score sheet on both tacks. Frans’ nerves soon subsided though, and he stuck some stellar moves, including a super technical double spock on the outside, but it was too little too late, and Estredo once again stole the victory from his grasp. 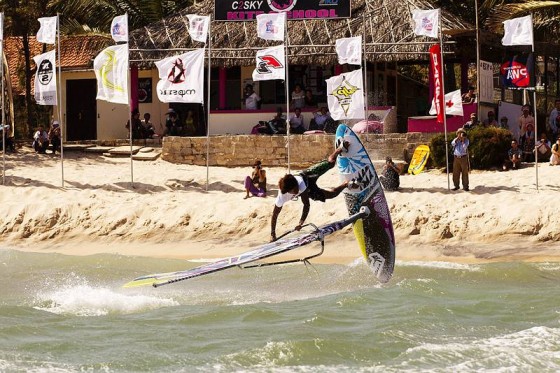 That left a familiar final of Kiri Thode, the previous day’s winner, versus Estredo, the reigning World Champion. Perhaps one of the most seen final while the past years. From the outset, Thode threw down with venom in his moves. Kicking off with a Burner, followed by a huge Air Flaka (a kind of mix in between Air Flaka and Ponch) and then a sickeningly perfect Air Bob, All moves got landed reall yhard and on the point. Gollito had a challenge on his hands to match the Bonaire local. In response, Estredo stuck a no handed Air Flaka, one handed Air Funnel 360 and a Burner. It was always going to be a close call, and when move of the day and arguably the competition so far went to Thode, for an epic fully planing Kono landed onto the face of a rolling swell, it sealed Estredo’s fait. Directly afterwards Gollito answered with a Pushloop, but Kiri went for a Backloop and landed it perfect. Despite a super close heat, Thode took the win, and in turn the double elimination victory with a unanimous 5-0 judging decision.

RESULT AFTER THE FIRST DOUBLE ELIMINATION

I think Ben Proffitt is a great commentator, I believe he was on the livestream of Sylt last year together with Phil Horrocks and they just cracked me up all the time, and they gave loads of useful comments and info on the side, never missing anything.

In addition, native speakers just provide so much better English than an Italian/German whatever, making it a pleasure to listen to!

I don’t know about the event commentator Robert Hoffman. He dose not know much about freestyle.
But on the live stream, Ben Profit and Max Rowe are doing a great job I think.

Its the same guy as in Klitmoller no?
That guy really ruined my livestream last time…
‘hesitated forward’