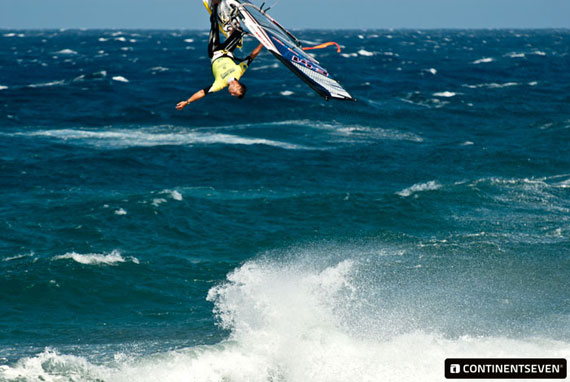 The ladies had to rigg their smallest sails in 3,0 or 3,3. And this small sizes were too big, when the first heat of the day in the ladies double elimination got started at 13.24.

Most of the men were on their 3,7 or even 3,3. But the ladies fought super tough and we saw a great comeback of Greek sailor Evi Tsape, who nailed awesome Pushloops and Forwards qualifiying for the top 6. Evi won three heats in a row, beating Beenen, who rotated through a forward with feet off and crashed extremely hard on her face. Afterwards Evi defeated Eva Oude Ophuis, who had great waverides and landed a Pushloop. In her last heat of the day she could win the fight against freestyle expert Laure Treboux, who had nice waverides, but missed big airtime. The Greek sailor will face Karin Jaggi tomorrow, who also made it back through the double elimination winning all three heats. Both have good chances now to make it on the podium. Evi Tsape, who obviously fully recovered from the hangman fracture, is now a serious opponent for the best of the ladies fleet. 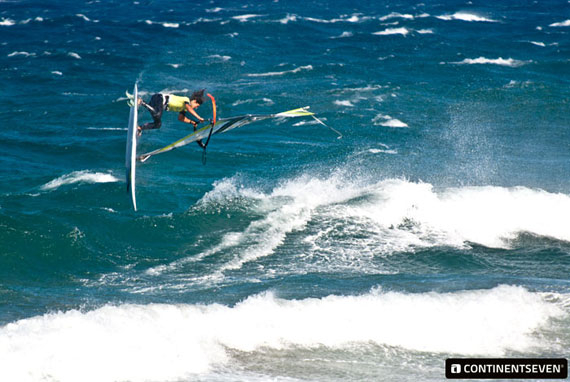 Here is a link to the actual standing of the elimination ladder of the ladies after 5 sailed heats. 5 or 6 more heats tomorrow.

In the men´s fleet we saw 19 valid heats in the double elimination, which got started at 09.40 in the morning 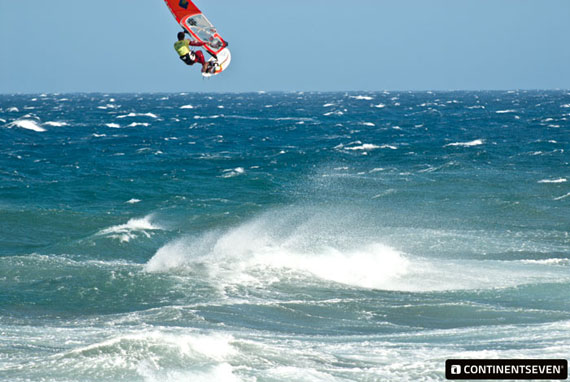 In the first round we saw a big upset: Dutch super experienced Peter Volwater lost to the young local José Romero Santana. Mikey Clancy, who had his comeback on the PWA tour after missing several events due to a heavy fracture at his leg, was not lucky and lost to Camille Juban.

In round 2 most of the favourites made it through. Boujmaa Guilloul looked quite solid. As well Aleix Sanllehy, who got stopped by Thomas Traversa. As well Boujmaa lost to Gran Canaria local Marcos Perez, who sailed extremely safe.

But Boujmaa had a good comeback after his horrific triple forward loop crash on Maui in April. “I still have some pain in my right hand, but no mental blockade. I definitely wanted to go for a triple back in April.” 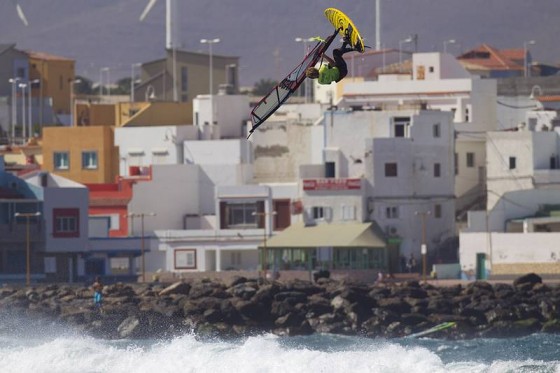 The density of big names definitely increased in round three and most of them put the hammer down like Dany Bruch, Eleazar Alonso, Klaas Voget, Ross Williams, Ben Proffit and Jaeger Stone from Western Australia, who had massive airtime plus newschool waveriding.

Stone continued to sail aggressive plus landing massive Backloops and Forwards. He made it up against German Klaas Voget, but lost to local Dario Ojeda, who definitely was on form landing massive Tabletop Pushloops and crazy Wave 360ties. Dany Bruch, who had an excellent heat, just the Double Forward was not perfect, lost to Robby Swift, who had an aggressive waveriding style.

Here is a link to the actual standing of the elimination ladder in the double of the men.

Tomorrow we will see a thrilling final. The forecast for this last day of competition predicts more wind and higher waves than today. The first heat could be started at 09:30 in the morning. The best waveperiod is forecasted for around 12.00. 6 to 7 heats are missing to know the winner in the men´s category.

It is a really amazing level this year, also in the womans fleet. I have been hoping for such a long time that windsurfing will become a really professional kind of sport. But now, I think, the time has come. The top men have such a high level, that they really push each other to better jumps. That’s the way for even more radical action, which we will hopefully see today. If the wind is really strong and the waves high we will see today first competed triple loop, possibly not only from Phillip Löster but also from Rocardo Compello… Read more »