The Belgian freestyle windsurfer Dieter van der Eyken reports for us from the PWA World Cup in Bonaire. After the first day of competition, Dieter could win his heats against Chico Bento and Davy Scheffers and lost then against the single elimniation winner Kiri Thode. Dieter is now on a great 5th place and got an extra mention from the PWA: “In round three he sailed like it was his last time, and managed to clock up a huge variety of moves in his heat against Scheffers, granting his passage into the top eight.” Keep it up, Dieter! 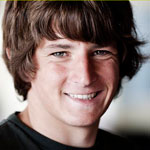 First day of competition here at Bonaire and already a result after the first day. We’ve seen Kiri, according to the expectations, winning the first single elimination in front of a really strong sailing Taty Frans in the winnersfinal. On third place we have the winner of Poderdorf Steven Van Broeckhoven holding down Gollito Estredo. With the woman we’ve seen Sarah-Quita Offringa dominating the women´s followed by a very well sailing Laura Treboux. And in third place Yoli de Brendt.

The day started in the morning at 9 where the inscription was taking place till 11. It was an easy morning to give everybody the time to get their stuff ready and gear stickered up with the event stickers for the upcoming 5 days of great action. Also it was the first ever PWA inscription for some of the younger competitors including the youngest with only 13 years Steven Max from Aruba. But also many more other hot young talents like Amado Vrieswijk had the chance to put their first PWA stickers into their sails, which for sure won’t be the last. 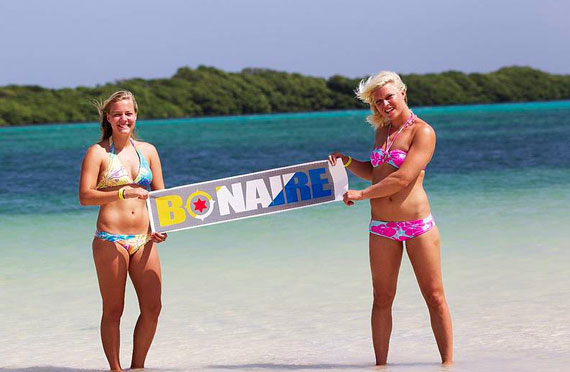 
COMPETITION STARTED
At 12.40 the first heat got started with 6min heats where 4 out of 7 moves each tack would count. The 18 knots wind looked promising for a great show in perfect freestyle conditions. In the first round we didn’t see any real surprises. The heat from Julien Mas from France was one of the best in the first round with nice Konos, Culos and Shakas. He made a very good and strong impression on the judges, which put him in the second round. The rest of the qualifiers where Amado Vrieswijk (showing also some nice moves including Culos and Konos), Caesar Finies, Endro Finies and Choco Frans. All passing to the next round. 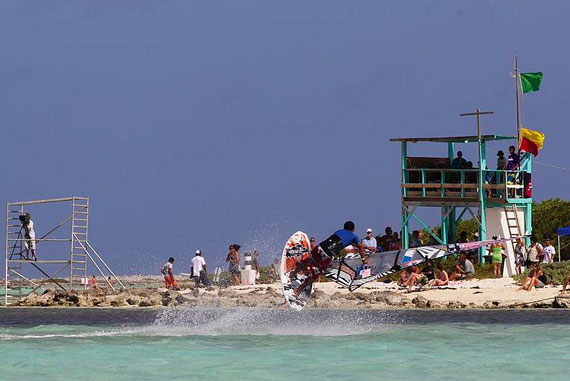 
In round 2 we saw some of the first suprises of the event, especially for the French. Anthony Ruenes, Nicolas Akgazciyan and Julien Mas all went out leaving no French sailors left in the competition. Anthony had a heat, where he didn’t even come close to his normal level giving the advantage to Endro Finies. Nicolas Akgazciyan got taken down by one of the young upcoming talents of Bonaire Youp Schmit, who was performing a great heat pulling of great Culos and Konos. But also a nice Shaka and Double Flakas made him win against a consistent Nicolas who performed also a great heat but not with the new school moves like Youp. Julien was taken down by Davy Scheffers. Although Julien sailed a nice heat he couldn’t keep up with Davy´s Burner into Puneta, Airfunnels etc. The other surprise was Tilo Eber finally able to show his real skills as he does his Culos and Kono straight in front of the judges here on Bonaire sending Yegor Popretinskiy home in the single.

In the third round every heat was getting closer and the action was getting higher and higher. Konos, Culos and Double switchstance moves where the standerd in this round. In the first heat we saw Phil Soltysiak and Steven Van Broeckhoven easily advancing into the quarter finals over Endro Finies and Andy Chambers. Both showed a solid heat, which made them take the victory. In the second heat I had to fight it out with Davy Scheffers after winning my first heat against Chico. The wind got lighter and the heat duration was extended up to 7 minutes to give us more time to do our moves. My heat went pretty good putting on a good diversity by doing a Shaka both ways, a great double ss Chacho, Kono and Culo trying to make the best out of the lighter conditions. Davy was sailing les consistent making more mistakes, which made me win the heat to get myself into the top 8.Tonky took down Flaka-shaka master Björn Saragoza and Taty could hold off Quincy Offringa. In the last heat we saw the two “surprises” fighting it out to get into the next round: Youp Schmit and Tilo Eber. The German Tilo Eber was sailing more consistent with a good diversity to take the win above the young talent from Bonaire. 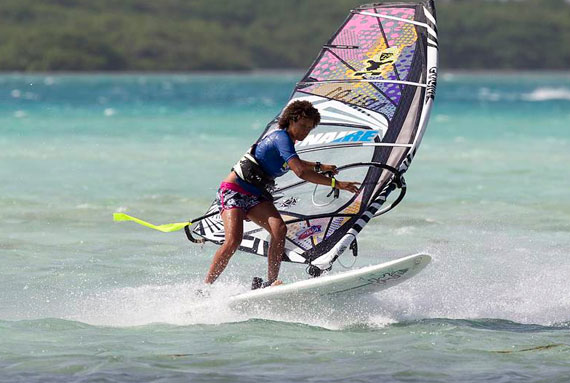 
THE GIRLS
Then the girls had their first heats, where we saw a very strong sailing Laure Treboux, which left a great impression on everybody on the beach doing a sick Grubby Diablo, nice Punetas and Esliders one handed. This put herself directly into the half final together with Sarah-Quita, Yoli Brendt and Aarianne Aukes, who took down here best friend Xenia Kessler.

TOP 8 MEN
In the 4th round in the man we saw no big surprises besides the nail-biting heat between the Frans brothers. The heat was great. In the beginning Tonky started with a big Culo and Kono to put his younger brother under pressure, but Taty got back into the game sailing a great heat with nice double switchstance moves coming in and Double Spocks. The combination with power moves like Ponches made it a perfect run on one tack. Also on the other tack Taty showed nice Culos, Burners, Konos and one of the first Spockculos in the competition here on Bonaire, making him advance over his older brother. Further we saw Steven, Kiri and Gollito placing themselves for the semi final.
In the woman’s semi final we saw Sarah-Quita dominating here heat against Arianne Aukes and a nice fight between Yoli de Brendt and Laura Treboux. Both were sailing a great heat but the Swiss Treboux just was a bit more consitent doing here moves all perfectly on both tacks and making herself advancing into the final to meet two times world champion Sarah-Quita.

SEMI FINAL MEN
The men´s half final was incredible. The wind got a bit stronger again and everybody was giving the best. It started with Kiri Thode facing Steven Van Broeckhoven, who was the only opponent this year for Kiri beating him in a heat in the PWA. And Taty facing Gollito. Let´s say that Kiri was on fire during this heat pulling of the sickest Airbob so far on the event. Together with his normal repertoire of Airfunnels, Funnel Burners and Culos he is catching high scores. But Steven was also fighting hard, doing a Future, the first Skopu of the event, a Burner one handed. Steven wouldn’t give this heat just away to Kiri but in the last minute Kiri made the deciding move pulling off a perfect Grubby into Ponch to make his place in the final sure. In the other part of the heat it was even more close with Taty scoring great points on diversity by doing on the way in a Ponch, Double Spock, Double Eslider and a Double Puneta one handed and doing on the other side a sick Culo, Spock-Culo, Burner one handed and Kono to fight against Gollito, who was on fire with Culos both sides a nice Airflaka, Burners and a nice high Culo making it very hard for the judges to decide who won this heat. In the end it was Taty, who advanced giving us a final between the Bonaire riders and a loser final between Steven and Gollito. 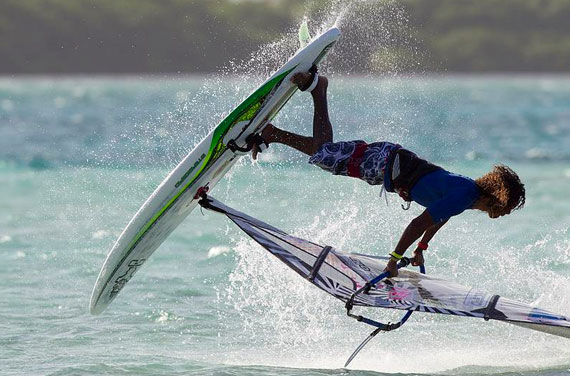 
THE FINALS
In the loser final in the girls we saw Yoli putting together a great heat against Arianne, who didn’t have the right timing on her watch and starting her heat to late. Her nerves were on edge, resulting in a less good heat for her, giving the victory to Yoli.
The loser final of the man was a whole other story starring a great performance of Steven landing top moves like Burner one handed into Puneta, Shovit Spock, Skopu, Grubby into Flaka, Airfunnel Funnel and future. Against Gollito, who was putting another great heat together with moves like a super nice NO handed Flaka 720, Burner, Culo and Flaka Shaka making it a close call for the judges. In the end the victory went to Steven putting him in 3rd place after the first single elimination!

The womans final saw another great heat by both ladies, Sarah-Quita and Laure. Both were doing nice switch stance moves, but when Sarah made the first ever Kono in a women´s competition, it was sure and everybody knew on the beach that Sarah was still the best girl out there leaving Laure with a great performance in second. Laure already expecting being second was happy with her second place.

In the men´s final we saw a great Bonaire show with all the people on the beach going crazy screaming for their favorite sailors Taty and Kiri. The crowd was happy to see them both in the final fighting it out against each other. Taty pulled another heat like he did before in the semi final, only making his moves even more cleaner than before. He came out of a Double Spock with the same speed coming in. He actually could easily have jumped into a triple putting great pressure on Kiri. But Kiri just was sailing unbelievable doing everything he had to do to win. Doing nice double moves, switch stance both ways and pulling out massive Airbobs Culo and Konos. To give the final defeating punch against Taty Kiri made a massive Kabichuchi, like only he can do them, making him winning the first single elimination.

At the end of the day we had a nice riders presentation to finish the day before everybody went home to sleep and get ready for the double!

This is wrong on the PWA site. Laure got second.

Nice report Dieter!!
I am proud of your shaka both tacks at every heat!:P:P

anyone knows when the double gets started?

Right now, it is 7:30 in the morning on Bonaire. The competition will start at 9.00. So, in 1,5 hours the Double Elimination will be started, if the conditions are good. We will have the live stream online, as soon as the action starts.

Thanks) i watched it yesterday the entire evening and i had so much fun!!!