Dunkerbeck and Arrighetti storm into the lead after convincing performances in their respective fleets off the beautiful Catalunyan coast. 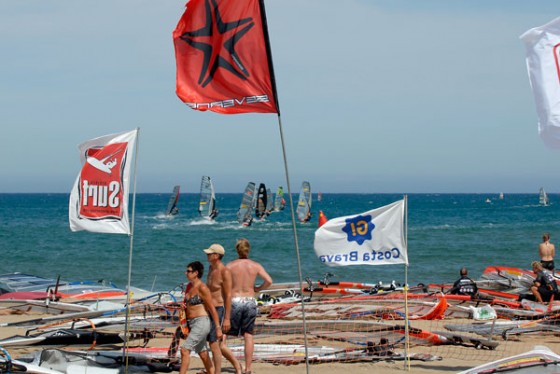 With early signals that racing would get underway bang on schedule, the majority of the sailors chose to hit the registration desk as soon as it opened. By midday, the entry list read like a who’s who of world cup windsurfing, which included the return of Valerie Arrighetti nee Ghibadou (Tabou, Loft).

On the first day of competition in Costa Brava the crowds watched on as one full elimination of high octane slalom was completed for both the men’s and women’s fleets. The men started a second elimination, but the wind began to moderate as the sun dropped lower in the evening sky, forcing many to wait for another day. 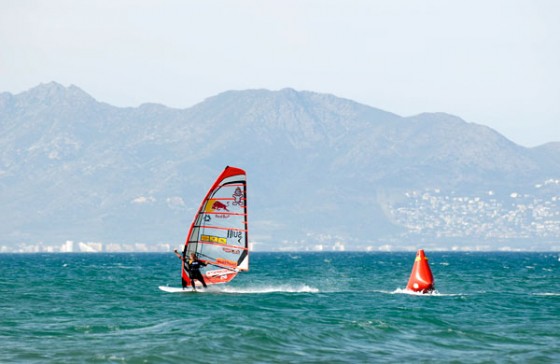 The shoreline was awash with spectators today, who were all treated to a performance from Bjorn Dunkerbeck (Starboard, Severne) that was more akin to his race winning days of the late eighties and nineties. Not only did he take down the mighty Antoine Albeau (JP, NeilPryde) in the final, but he managed to win every heat he sailed with infectious style. During the final, everyone was on the edge of their seats, and all eyes were on the showdown of the champions. Dunkerbeck held back on the start, but his superior board speed saw him slingshot out in front of the fleet ahead of Albeau. Dunkerbeck held his lane well down the first reach and round the course until halfway through where he suffered a sketchy gybe, causing everyone on the beach to jump straight to their feet. The consistently strong Albeau was right on his tail, and ready to pounce at any opportunity. But, Dunkerbeck kept his cool and continued to lead the way until he crossed the line in first place. The race felt like a lifetime, but in actual fact was just a few minutes. Having already witnessed the heat of the century, god only knows what tomorrow will bring…

With a star-studded cast, the women’s final of race one was always going to be interesting. But, they had to get there first! And, this meant a battle of the titans in heat two with arch rivals, Karin Jaggi (Patrik, Severne) and Valerie Arrighetti lining up together from the word go. Arrighetti put on a spectacular show with great speed on sails that she’d only just unwrapped. Jaggi fought hard, but couldn’t quite match the 2009 World Champion. The final was a similar affair for Arrigheti and Jaggi but with the addition of many more furiously fast females, including Sarah-Quita Offringa (Starboard, Gaastra), Lise Vidal (Exocet, North), Sarah Hebert (Naish), and Alice Arutkin (Starboard, North). This is one of the toughest fleets the women’s division has seen for a while, which makes for some extremely exciting racing. Arrighetti dominated from start to finish, proving she still has what it takes to win a world cup.

Bjorn Dunkerbeck “I felt good all day long. I won every single one of my heats, and my semi-final by a really long way. I felt very confident on my Starboard iSonic 111 and my Severne Reflex 8.6. I had a great top speed, and no problems coming out of the gybes either. In the final I went for a safe start because I didn’t want to push it too much. I had excellent speed down the first leg and managed to get ahead of both Cyril Moussilmani (Starboard, North) and Antoine by the first mark. I pretty much took off from there. Although, I had a little problem at the third mark because the wind dropped quite a bit and Antoine managed to catch up a little, but a gust came just at the right moment and I took off ahead of him again. Winning the first race is the best thing that can happen in an event, and it’s great for the confidence. I’m hoping that the wind will stay strong for the rest of the competition so that I’m powered on my 8.6 because I much prefer that to the lighter stuff we had in Korea.”

Valerie Arrighetti “I didn’t go to Korea because of some personal problems, so it was important for me to come here and perform well, both for my sponsors and for myself. I used my 7.0 with the Tabou 59, and it all worked incredibly. I didn’t think that I would be in first position so quickly because the sails are brand new and I’m borrowing the board, but there you go! It’s great for me to be where I am, and I’m looking forward to getting on the water tomorrow, and trying to win again.” 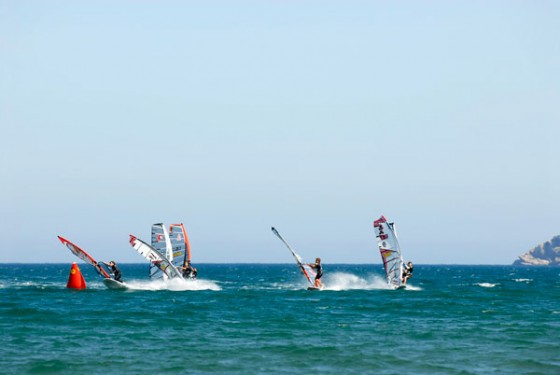 For the first time the world’s top racers were tracked all day long with a live feed broadcast to the planet via the internet. By following this link HERE you can check it out. And, if you missed the men’s final the first time round, take a closer look at 17:08:15. The sailors will have the devices on their boards all week, so make sure you tune in to an action packed live race at some point this week.

medea2010-07-23T20:16:26+02:00June 8th, 2010|
Subscribe
0 Comments
Inline Feedbacks
View all comments
This website is using Google Analytics. Please click here if you want to opt-out. Click here to opt-out.
0
0
Would love your thoughts, please comment.x
()
x
| Reply
We use cookies to ensure that we give you the best experience on our website. If you continue to use this site we will assume that you are happy with it.OkNoRead more