The Professional Windsurfers Association is pleased to announce that the PWA World Tour will become the latest sporting arena to introduce equal amounts for prize winners in the men’s and women’s fleets at its events. Building on the achievements of events like the Gran Canaria PWA World Cup, which has provided fully equal prize money for both divisions since 2018, all events will now enjoy a prize money structure that equally respects the outstanding pool of talent and professionalism that exists in the women’s divisions, alongside the men’s divisions. 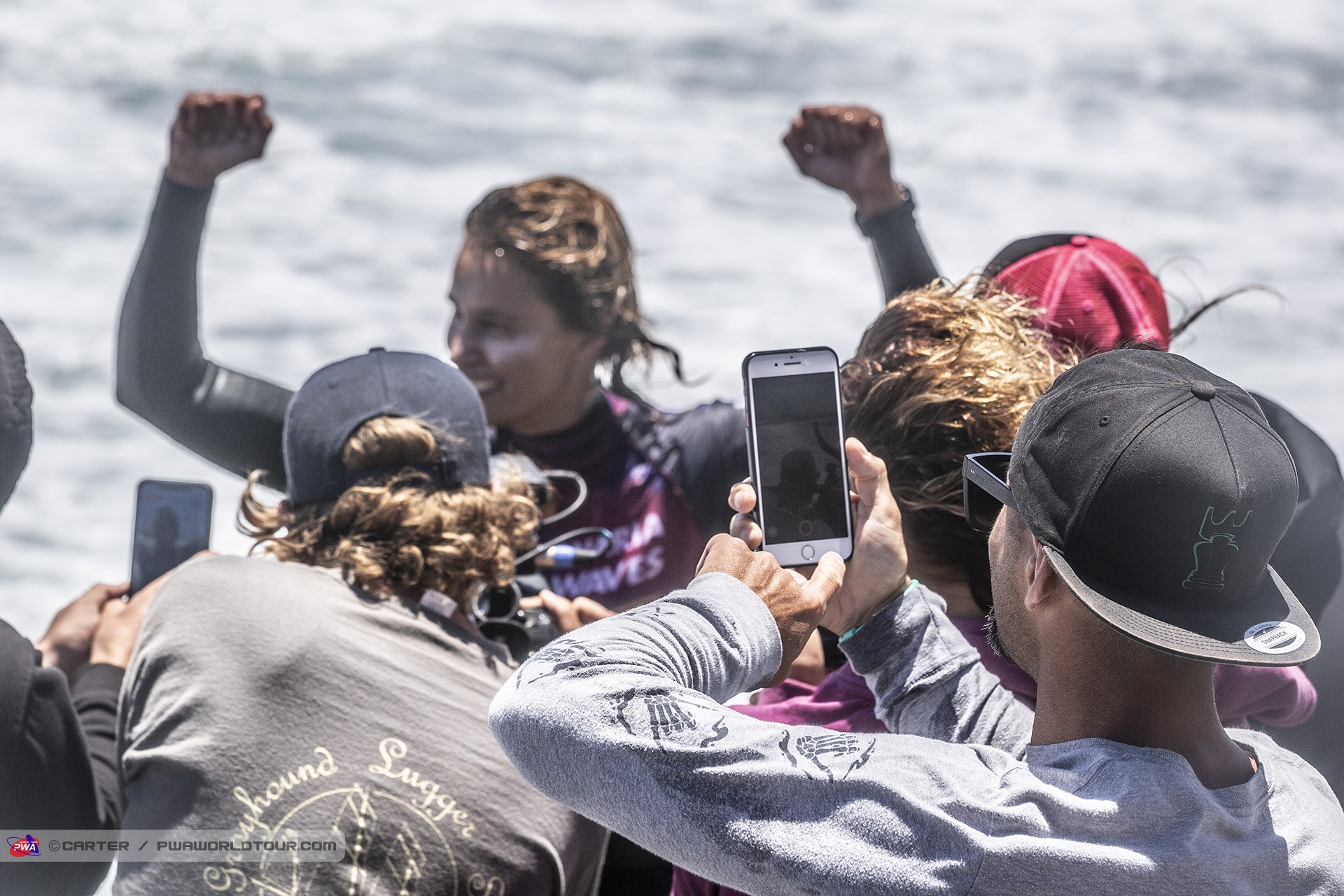 Daida Moreno celebrates another victory in her career (Photo: PWAworldtour/Carter).

Although the COVID-19 pandemic has been a difficult time for everyone, including the PWA, with almost all events being forced to cancel in 2020, it has provided an unusual opportunity for review, analysis and change. Earlier in the year, the PWA announced that the points allocation of the annual constructors ranking would be upgraded to grant equal points to female riders, offering greater value to manufacturers for supporting women on their team. Now the final steps have been taken to bring prize money amounts in line too.

The new structure will mean that all competitors at events who earn prize money will receive the same amount for their finishing position, regardless of gender. This has been achieved by reducing the depth of places to which the men’s division are awarded prizes and reallocating those funds to the women’s division. Although fewer of the men’s division will receive prize money, those that do will not receive any significant reduction to the amounts currently awarded.

These changes will usher in a new era of equality in windsurfing and, combined with other adjustments to equipment rules, will help to further boost the already growing participation in the women’s divisions.

Jimmy Diaz, PWA President: We are very happy to finally be able to make these changes, but it would be wrong to say I am proud of them as such, as equality should be a fundamental right, not a privilege. The PWA strives to ensure equal opportunities for anyone, regardless of race or gender, based purely on merit and ability, and with these changes, we are able to make that claim more fully.

Iballa Moreno – Multiple Wave World Champion: “I’m pretty stoked to see the PWA making new rules concerning the prize money for the women. It’s a really good step forward and I’m really happy to be able to live this moment because it’s something we’ve been fighting for many years. We’ve been doing it in Gran Canaria now for the last 3 years, and I am happy to see that the whole tour now will have something equal too.” 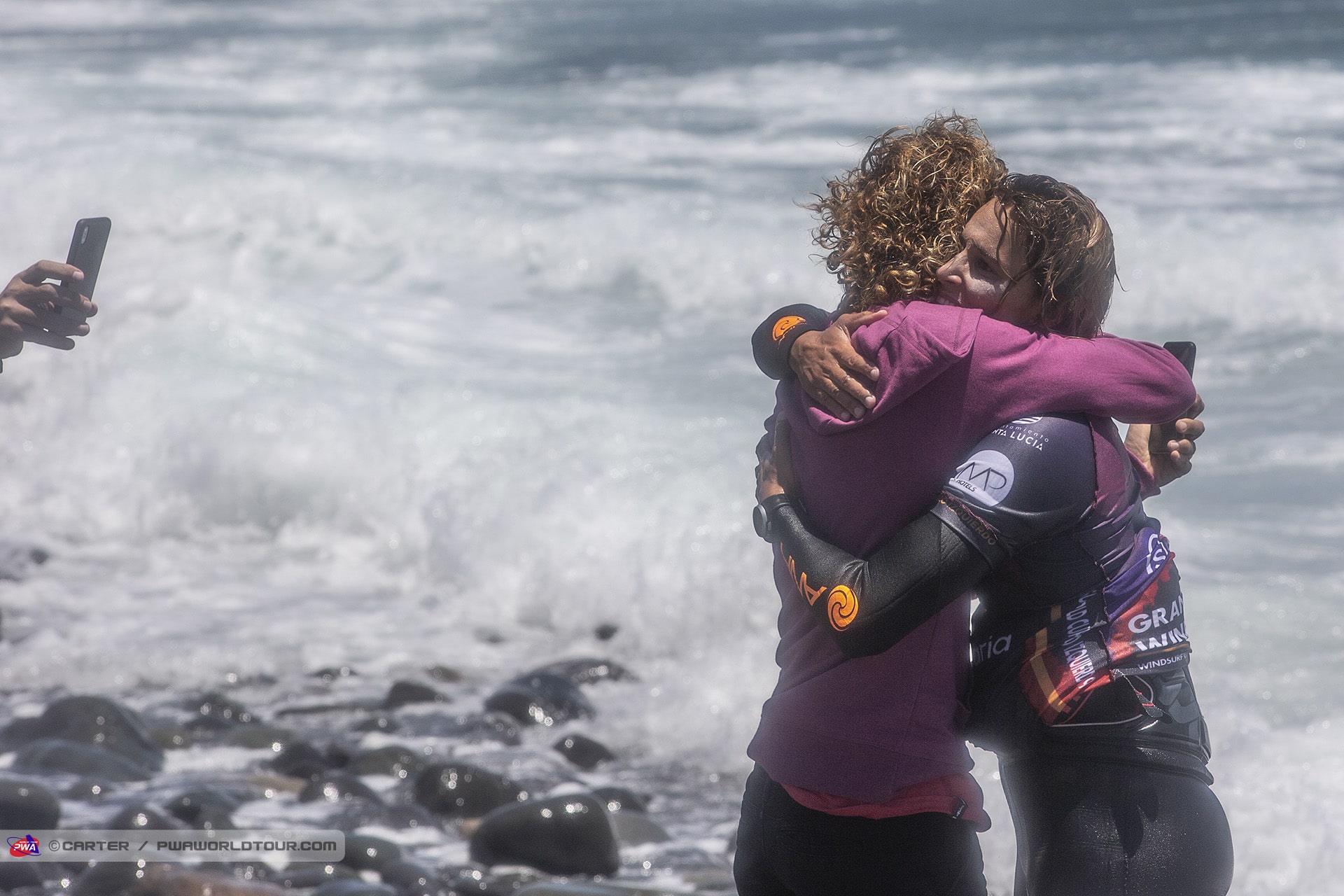 Sarah-Quita Offringa – 2019 Wave World Champion, Multiple Freestyle and Slalom World Champion: “It’s amazing that we get this news and that this is how the year is going to start for us, it’s a big step for women in windsurfing. I thinks it’s awesome that PWA has moved in this direction as well. I want to thank Daida and Iballa Moreno who kicked this off in the Canary Islands a couple of years ago at the Pozo event in 2018 and it’s about time this happened. I think that for the next generation it’s huge that they can step into competing in the PWA and know that they are equal, because we put the same effort into the sport, we do the same amount of hours, travel the same and take the same risks. So in the end I think it’s very important that we made this step. I’m really looking forward to how this is going to help get more women into the sport.” 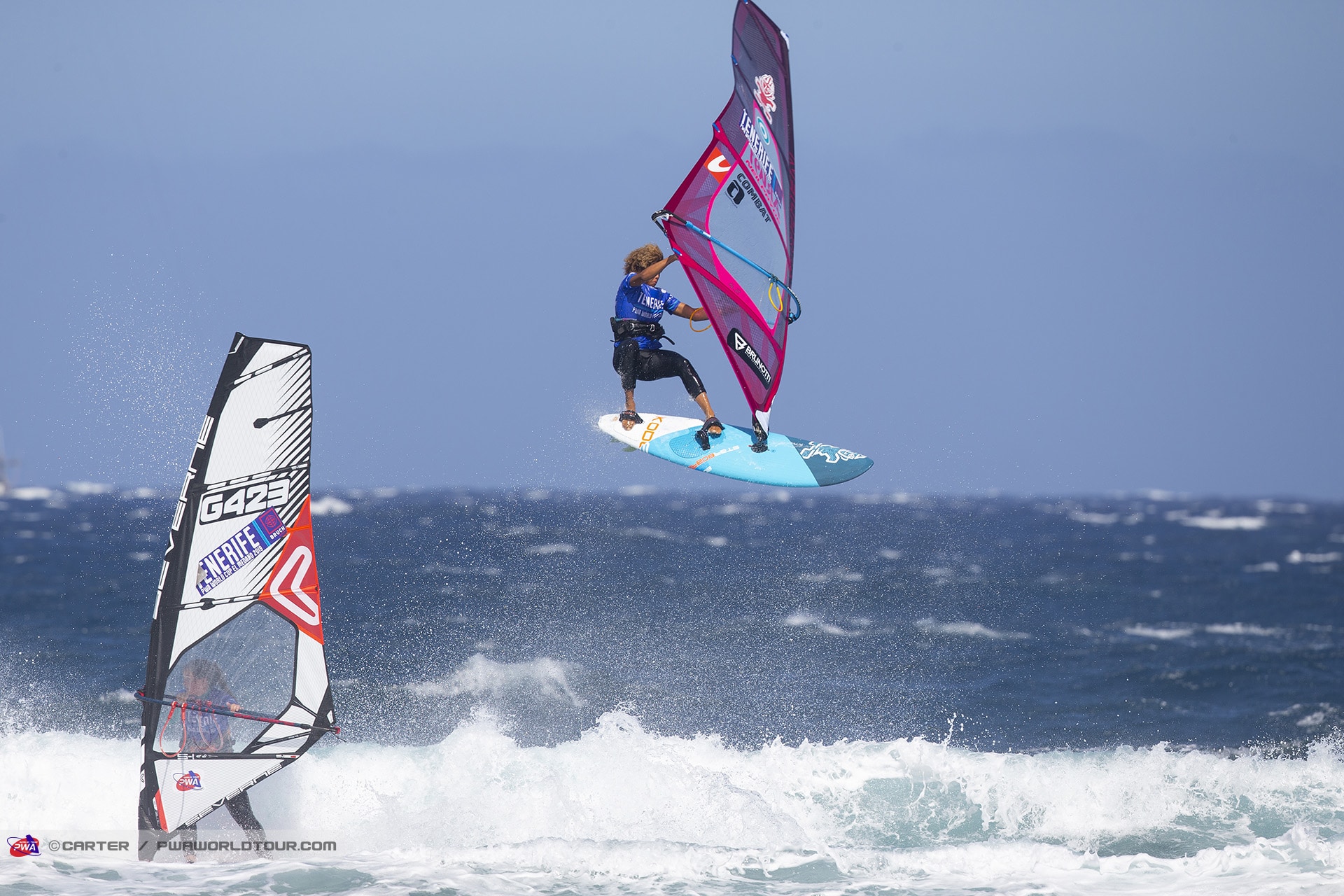 Oda Johanne – windsurfing pro and PWA freestyle title contender: Finally we will have equal price money in the World Cup! A special thanks to everyone who has been working hard for this! Standing on the podium with the best girls in the world has been amazing! But it has also been a reminder that when we see the men’s podium we know they earned much more, while we have been putting in the same work, time, risk and training. We are fewer women unfortunately, but with equal pay, I am sure more women will see a future in our sport. I want to thank my sponsors outside of the windsurf industry because they have been the main reason I could be a full-time professional windsurfer until now as the difference in pay has been extremely high in the windsurf industry! The future is bright for women’s windsurfing and it’s a good start with equal pay in the PWA World Tour. 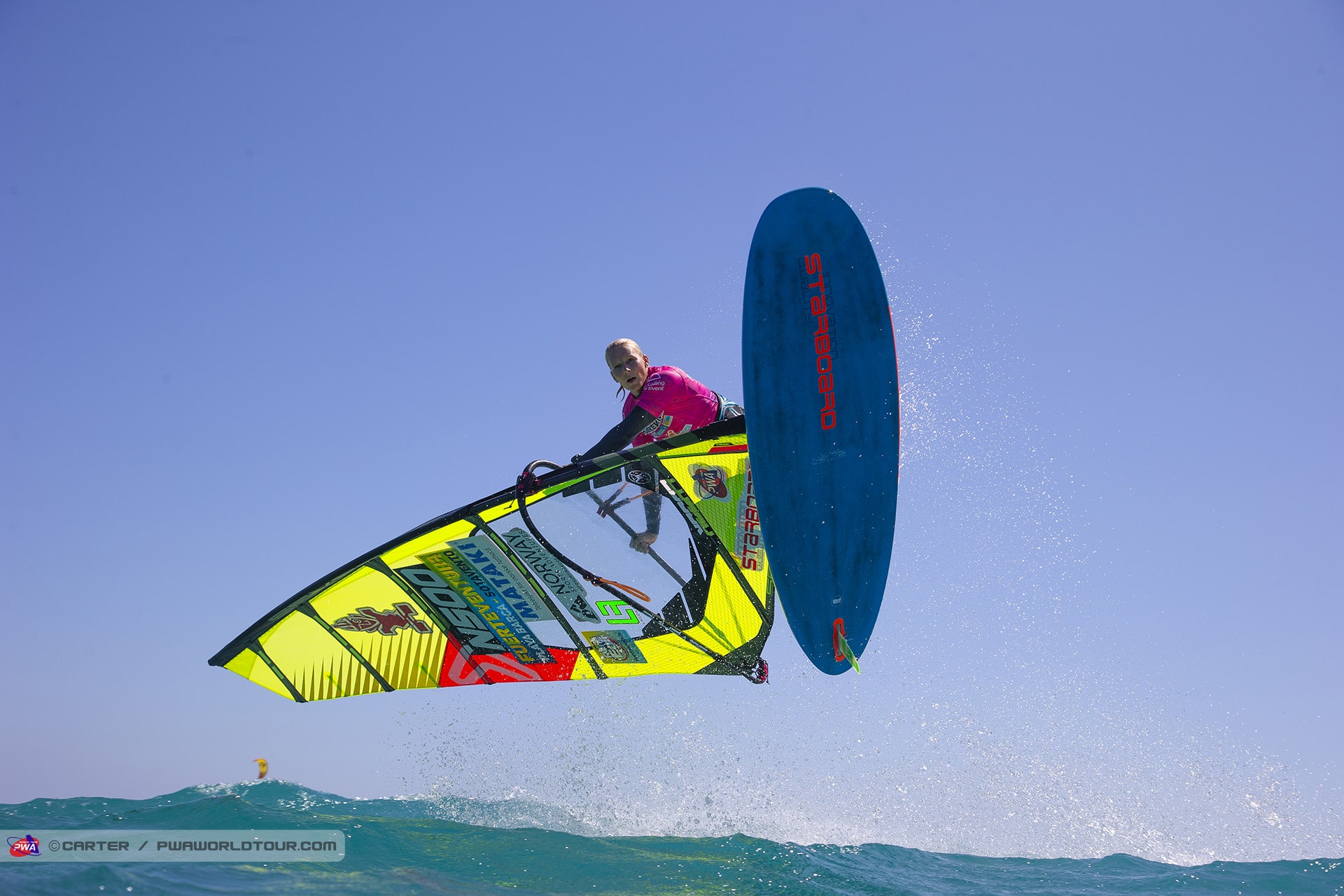 Oda Johanne is excited about the changes (Photo: Carter/PWA)

Delphine Cousin-Questel – 2019 Foil World Champion, Multiple Slalom World Champion: “I have an amazing feeling because we are fighting for years for more equality in our sport and now it’s a big step forwards for the women. Now we just have to continue to work, especially with the industry, to arrive with full equality. It will for sure bring more women on the tour and help a lot of girls to become more professional. I’m really, really happy about that. For 2021, I can’t await to be on the starting line again!” 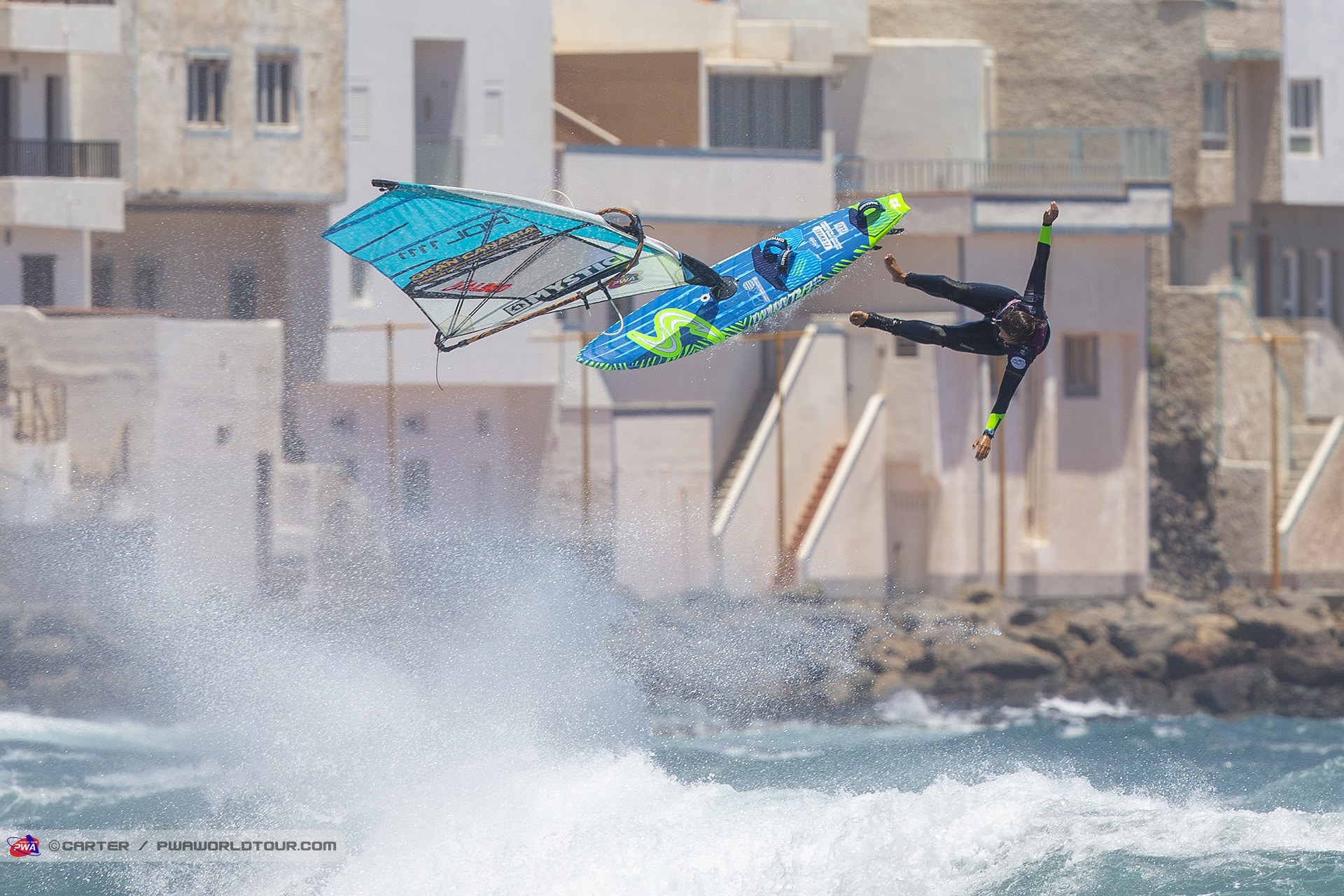 Lena Erdil: “FINALLY!! Equal Pay for Equal Play becomes a reality @pwaworldtour ! I’ve dedicated my whole life and professional career to this Sport despite being made feel that my achievements, sacrifices and performances weren’t worth as much as that of fellow guys on tour. That I perhaps didn’t deserve to be paid the same as the guys because they were sailing 4 knots faster than me! I can not even begin to tell you how happy and stoked I am to know that the next generation of female windsurfers will grow up knowing they are equal and allowed to see windsurfing as a professional career not just reserved for men.

Arrianne Aukes: Equal price money in PWA for men and women! So happy that future windsurfing girls will feel equal to men. I have seen so many talented girls over the last ten years who could not afford to compete and chose different paths. I hope it will help the sport grow even more, both for men and women. 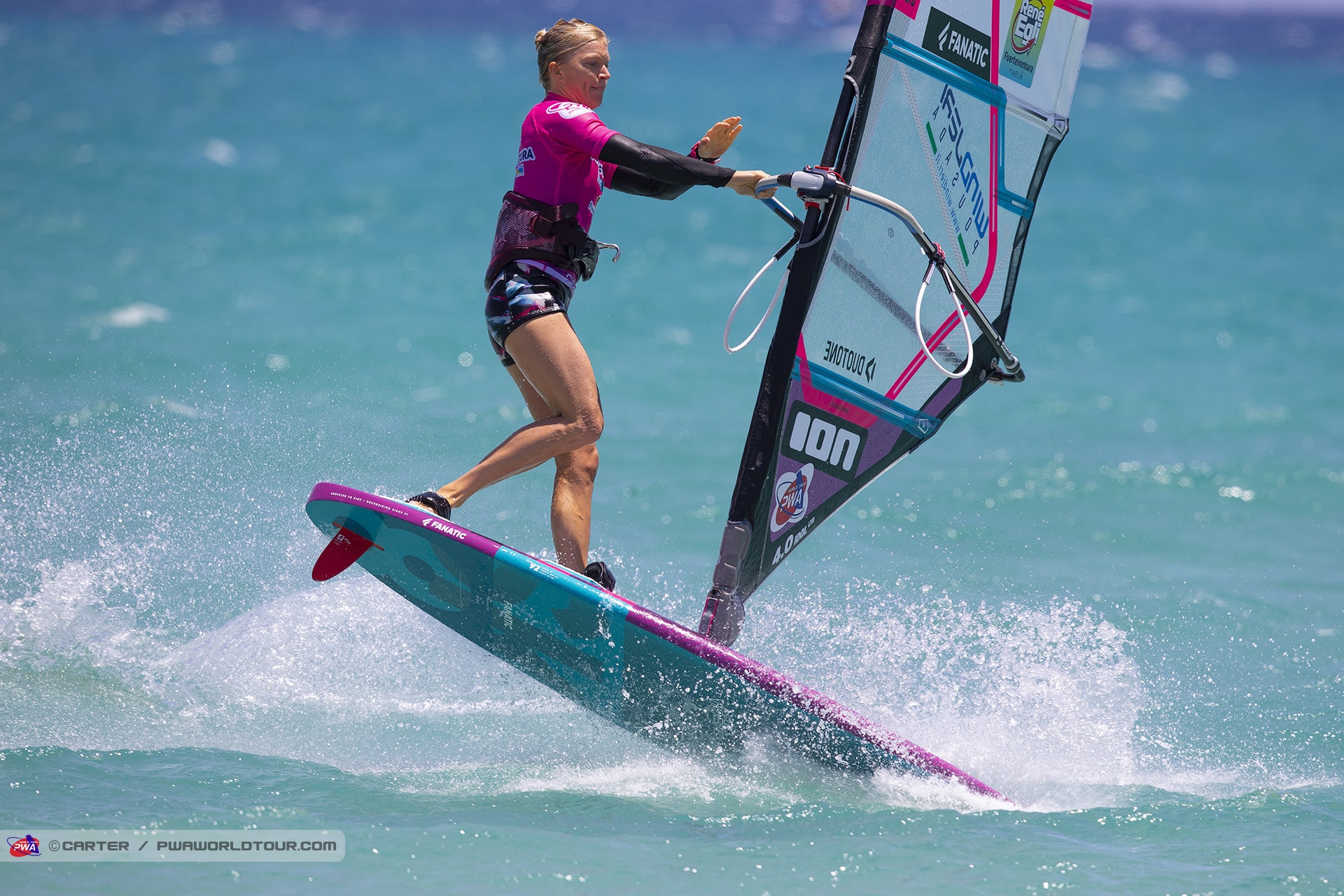 The PWA will bring you more updates from the PWA Tour as they develop.

I just read a super relevant study that showed that 100% of people that are mad about women getting paid to win windsurfing competitions overwhelming suck at the sport of windsurfing, can’t even jibe, and should probably find a different hobby. Really interesting read I think a lot of you guys would take something away from it.

Seems to me that this is a good idea which should improve the level of female windsurfers in competition in general. I found an old PWA list and for a mens slalom with EUR 40K prize money it seems that 1st gets about EUR 6400K whilst 20th about EUR 640 so I’m not sure if the prize money is so important for the lower ranked male riders, it probably has more to do with their sponsorship and contracts. If I understand correctly, the PWA has made the constructors points system equal as well which is surely a far more important… Read more »

this is de end of PWA

Windsurfing is not a difficult sport, it is a VERY difficult one.Women windsurfing has gone a long way with the payment system the way it is. Look at Sarah Quita- Waves! Slalom ! Freestyle!!! Did she improve only just because of the money? I doubt it. Where are the 15-20 women like her ? Nowhere. First let at least a few appear that can be nearly that competitive and then start talking money. I bet then a lot of guys will be for money for the women fleet than men fleet. Everything else is just putting the cart in front… Read more »