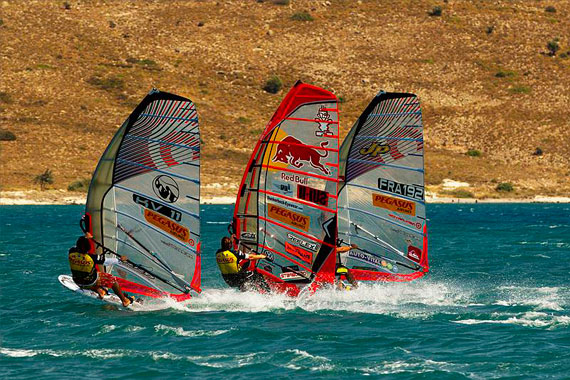 The wind blew in between 15 and 20 knots, in gusts probably stronger, but it got lighter later the day. And there was pressure in the air and we saw many premature starts in all rounds. One of the biggest names, Finian Maynard, went over early in the quarter final of elimination 8. But this was his first time not making it to the final. So he could discard this result and he stayed with a second place in round 9 in safe 2nd position just behind Björn Dunkerbeck. The current tour and eventleader made it twice into the winners final, but could not finish as normal. Once he crashed in an infight with Micah Buzianis at the second mark and finished 4th. In race 9 he struggled again in the final, crashing into Alberto Menegatti at mark one. But twice he fought back. Now the distance in points in between Björn and Finian is getting smaller, just 4,9 points are in between before the last day of the event.

Peter Volwater had a great day winning elimination 8 and winning the loosers final in elimination 9.

Volwater stated to Ed Sinclair, PWA Press Officer:
“I have had a great day, I have finally sorted out my starts, I was struggling a little earlier in the week but now I have worked out the right routine and it seems to be working. In the semi-final of elimination nine I really wanted to change my equipment but I didn’t have time, so I was caught out at the first mark, but I came back and won the losers final. I am super-stoked about winning the race before, I was happy in second but then Albeau fell and I was able to take the opportunity and as long as I stayed on my board I was fine.”

Antoine Albeau impressed in round 9 and won with great speed. He already was close to win round 8, but felt at the final jibe and got passed by Volwater, Van der Steen, Questel and Dunkerbeck.

In the ladies fleet Sarah-Quita Offringa dominated the day winning both eliminations and moved up in second position. 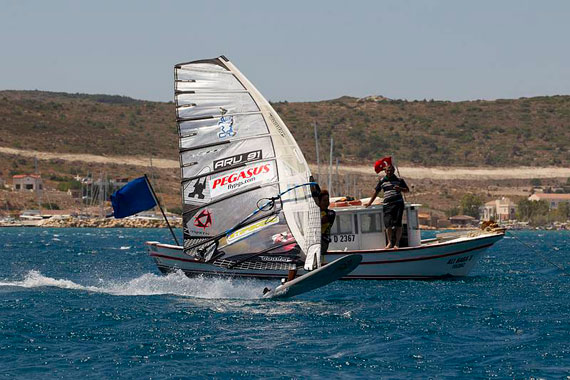 Karin Jaggi kept with two finals in 8th and 4th her lead and Valerie confirmed her 3rd position with two thirds. Lena Erdil dropped to 4th by one point despite a 2nd in one elimination, but lost one point with a 5th. So we will see a close final on the last day,at day 6 at Alacati.

The wind on the last day of the event is already up and the competition will commence from 11.30 on.