On day 4 we saw the most stormy conditions with a lot of crashes since the PWA has Slalomracing in the bay of Alacati. All six tourstops of the season saw enough wind to run 4 full rounds or more. Here at Alacati the 7th round could be finished today and 2 more days are to go. Karin Jaggi and Björn Dunkerbeck kept their eventlead. 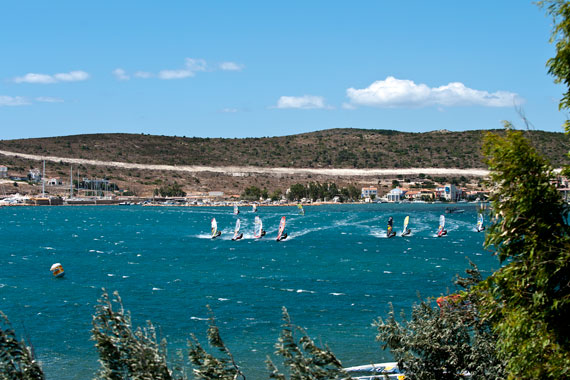 Stomry conditions in the bay of Alacati on the fourth day - Pic: Continentseven

The day started earlier on day 04, with a skippersmeeting at 09:30 for the remaining sailors of round 5 of the previous day.Antoine Albeau was definitely on form and took in 25 to 30 knots of wind his first bullet, in front of a strong sailing Micah Buzianis and Cedric Bordes, who is sailing very strong when the wind picks up. Current eventleader Dunkerbeck finished in 5th. In the ladies elimination 5 Karin Jaggi again could show, why she came to Alacati. The Swiss long time pro wants to win the race. In second came Arrighetti, in third Lena Erdil.

The wind picked up while the day and most of the sailors were on the smallest board, if they brought it to Alacati. Sails in between 6,0 and 7,0 m got rigged. Elimination 6 saw real highwindaction and eventleader Björn Dunkerbeck took the hammer down in the final. But he fought hard with Ben van der Steen and Antoine Albeau to qualify in the semifinal. Peter Volwater came in second and looked extremely fast in the high wind conditions in final 6. Josh Angulo, who sailed very consistent and aggressive in the high wind finished in 3rd.

Alice Arutkin could take her first victory in the 6th elimination in the ladies fleet, followed by Karin Jaggi and Sarah-Quita Offringa. The ladies definitely showed the proof, that they also can sail excellent in 30+ knots conditions. When watching them blasting towards the first mark it looked very exciting. The boards were flying and the speed was definitely great!

The PWA race crew decided to run race 7, which should bring the second discard. It got started at 14.45! The wind went up to 35 knots in gusts, what is quite unusual for Alacati at this time of the year. But it looks like all PWA events are set on the perfect days this season.

Elimination 7 saw a strong comeback of French Cyril Moussilmani, who almost could win the last event at Fuerteventura. He started great in the final, jibed first and took his first victory in a single elimination here at Alacati and put him overall already in 13th position. Cyril seems to be very disappointed here at Alacati.

Team Pryde sailors put a lot of pressure in this heat as well. Micah Buzianis came in 2nd and Julien Quentel in 3rd. Björn Dunkerbeck had a crash in the semifinal after a collision with Cedric Bordes. So the fight for the event victory is still relatively open. Björn leads the fleet, but has two high discards already. Finian Maynard, who follows in second, made it into all winnerfinals so far, is the most consistent sailor and has a much lower discard compared to his contenders in the top 5. In third is Micah Buzianis after 7 races, followed by Ben van der Steen and Antoine Albeau, who stepped up by 4 places today4. The windforecast for the remaining days looks excellent!

The ladies final number 7 saw a great start of Sarah-Quita Offringa, who were leading the race till the last jibing mark, where she tried to save the jibe too much and hooked in with the sail in the water after the sailflip in the jibe. Karin Jaggi, who were on her heels through all the race, took advantage of this little accident and passed Sarah-Quita.

“I had a great day, I won two of the races and I also came second so it couldn’t get much better. It has been a really windy day, especially for Alacati. I don’t think many people expected that. I didn’t have my smallest sail, I was on my 5.6m, but that felt great, it’s hard to sail but everyone was falling so it was ok.” (Karin Jaggi in the talk with Ed Sinclair, PWA Press officer)

Karin has a clear lead with 4,8 points only, discarding a second and a fourth. We seldom saw a better sailing Karin Jaggi. In second and third follow Valerie Arrighetti and best Turkish sailor Lena Erdil, who both have the same points, 12,2 points behind Karin. Sarah-Quita Offringa sits in 4th, jut 0,7 points behind the French and Turkish sailor.

The skippersmeeting for the second last day is set for 10.30 with a first possible start at 11.00.