Day 3 started as the previous one. Just a very light breeze blew into the bay while the morning hours. There was only enough wind for the beginner lessions. 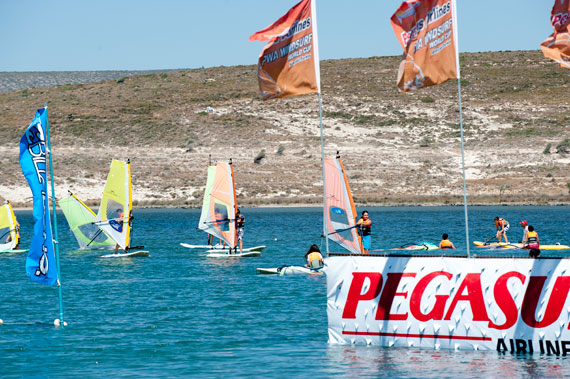 Very light wind in the morning on day 3 - Pic: Continentseven.com

While the 11.00 o`clock skippersmeeting there were some discussions concerning the starting procedure. But it´s definitely hard to start good out of this little harbour bay with short distance to the startline. 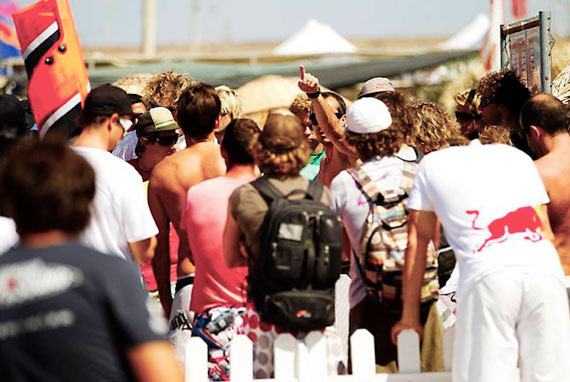 At around 12.00 the wind suddenly started to blow with gusts up to 15 knots. Most of the men sailors were preparing two sailsizes around 8,5 or 9,5 square meters. The ladies got their 7,8 rigged. At 12.30 the first heat of the day came in sequence. Heat 8 of the first round in elimination 4 saw a big surprise. Björn Dunkerbeck had to fight for the fourth place in round one. He had a hard opponent to fight with. It was Ross Williams. On jibe mark 3 the current event leader could pass Williams, but the British sailor did not give up, fought back at the final jibemark and stayed upwind. He gave Dunkerbeck the bad air and could make it back in 4th. Björn was out and collected his first discard at the event.

Watch what Björn says about his early out in race nr. 4

Big names like Maynard, Buzianis, Van der Steen and Albeau made it into the final. As well Toselli, Bijl, who definitely likes the conditions at Alacati and comes on form better and better. Finian Maynard nailed a brilliant start and took the lead from the beginning on. Micah Buzianis, last year´s winner, was on his heels, but Finian could extend his lead till the end of the race. Ben van der Steen followed in third and Antoine Albeau, who made it in his first winnersfinal here at Alacati, came in 4th.

In the ladies fleet light wind expert Delphine Cousin had a great final, winning her first elimination here at Alacati in front of event leader Karin Jaggi. Sarah-Quita Offringa, current tour leader in the Slalom discipline and Freestyle world champion, made it up in 2nd overall with a 4th place in the 4th elimination. Just 0.3 points behind her follows Lena Erdil, who only made it in 8th. The fight in the ladies fleet is exremely tight. In between 2nd and 9th place are less than 10 points difference.

The race crew started elimination 5 of the men some minutes after 16.00. The wind was at the limit blowing in some heats just with 7 to 9 knots. Several runs got cancelled, but 7 heats got finished in conditions on the limit. Especially the start was very important. A bad start and the race is over. And we saw some massive upsets: not one of the three Moussilmani brothers made it through the first round. Peter Volwater as well could not qualify.

After heat 8 got cancelled due to the too light wind, we just saw 6-10 knots on the course, the Z-Flag came up some minutes before 17.00. The sailors, spectators and the race crew were on standby waiting for the return of the wind. But that did not happen. So all sailors got relaesed and all sailors, who are in this round 5 will see an early skippersmeeting at 09.30 with a first possible start at 10.00.

The windforecast for the remaining 3 days is excellent and we could see 6 to 8 races more.