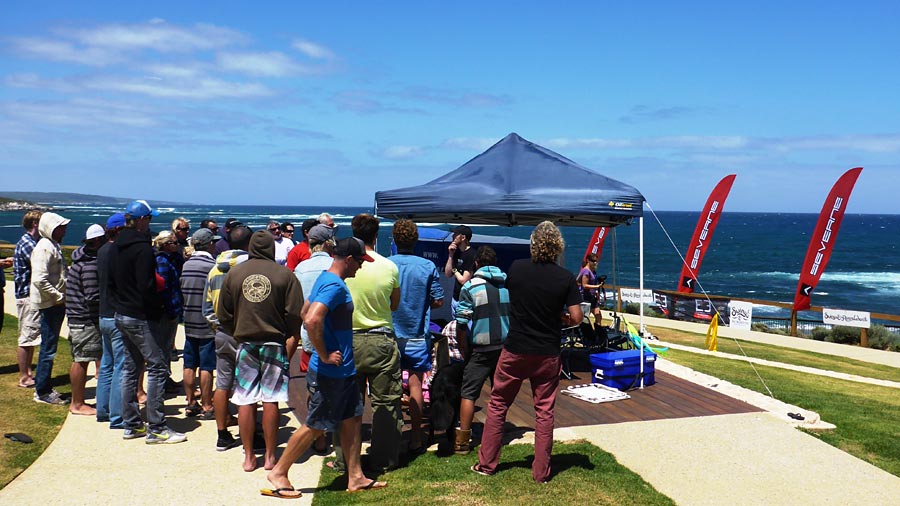 Skippersmeeting 2014 at Margaret River. What a fantastic view!

Once again Margaret River’s Main Break played host to Windsurfing WA’s prestigious wave contest on Saturday 8th February, and with the forecast looking good all week, there was a fantastic turnout of sailors keen to pit their skills against the notorious break. Forty windsurfers, competing across four divisions and 6 judges scoring the best of two wave rides and one jump made for a captivating spectacle of aggressive turns, big forwards and a smattering of wipeouts for good measure. The action kicked off with the three ladies hitting the water first. Despite the light winds and small swell making for some challenging conditions, they managed to conjure up a few wave rides in the 10 minute heat before visiting British windsurfer, Sarah Bibby, scored a great wave at the end to claim the number one spot. As the following round of heats unfolded, the wind and swell for the most part picked up, and the remaining sailors made the most of the improving conditions to contend for a place in the finals. 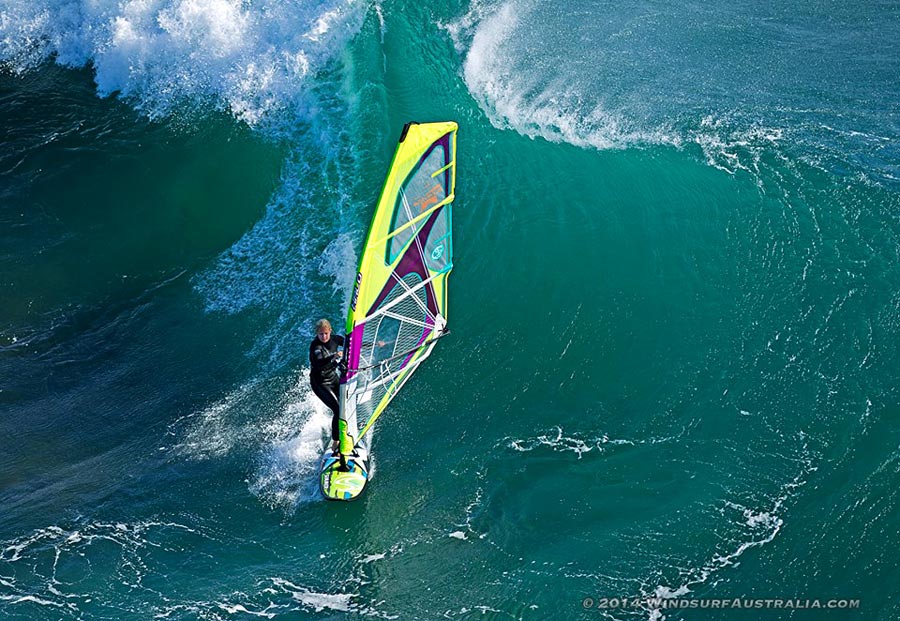 Sarah Bibby from UK made it on the top spot of the podium. Congrats!

Eventual winner of the ladies division, Sarah Bibby, gives us her take on the event and sailing at the iconic wave location. Having only sailed at main break twice before the event, Sarah explains that it can be a difficult wave to read. Although her wave selection and positioning in the Open heat would have suggested otherwise. Sarah scored two great wave rides competing against the boys, finding herself deep in the pocket and timing her turns well to impress the judges. However, the lighter winds earlier on in the Ladies heat proved to be a bit tricky for all three women competing. A 10 minute heat in marginal winds made it challenging to score a decent wave ride.

Fortunately the wind and swell picked up as the day progressed and Sarah was able to take full advantage of the conditions, fitting in a heli shoot and quick tour of the region by air to top off an action packed day. Margaret River definitely has a formidable reputation; launching and landing through the reef can be daunting to new and seasoned sailors alike. But Sarah admits that her overall experience at Margs has been a positive one; the wave is more powerful in comparison to Lancelin and Coronation, but in terms of a big wave spot she believes it’s not as intimidating as its reputation would suggest. We just have to add, that Sarah prepared very well in Chile, where she spent 6 weeks in November/December. Have a look on her video!

Although local legend, Hughie Bowden, has a few stories that might make you think otherwise. In his twenty years of sailing here, Hughie has witnessed just how gnarly Main Break can be and has built up a healthy respect for the wave in that time. Standing in a converted saw mill enjoying the post-event entertainment, Hughie glances up to the roof members some 15ft-plus in the air as a reference point for a ‘classic’ Margies day, describing the conditions for the competition as relatively small. Hughie, who turned 60 this year, has been windsurfing for over 30 years after having first seen the sport in Hawaii in the late 70’s. It was his second time competing in the event, having convincingly won the Grand Master’s division last year, and he explains it was good taking part again despite being up against some younger sailors. One thing is for sure though, and that’s if you don’t quite make it out on the water here, it’s an experience in itself just watching the locals sail.

Back on the water, the Masters final consisted of Jonah Desforges, Pete Tomsett, Jason Matthews and Graham Pullen. As the starting hooter sounded, Jonah dropped in on the biggest wave of the day to set the tone for the following ten minutes of action. Graham landed a clean backloop and Jonah continued his excellent wave selection and smooth bottom turns. Ultimately, it was Pete’s aggressive wide riding and solid forwards which impressed the judges and saw him clinch the number one spot. 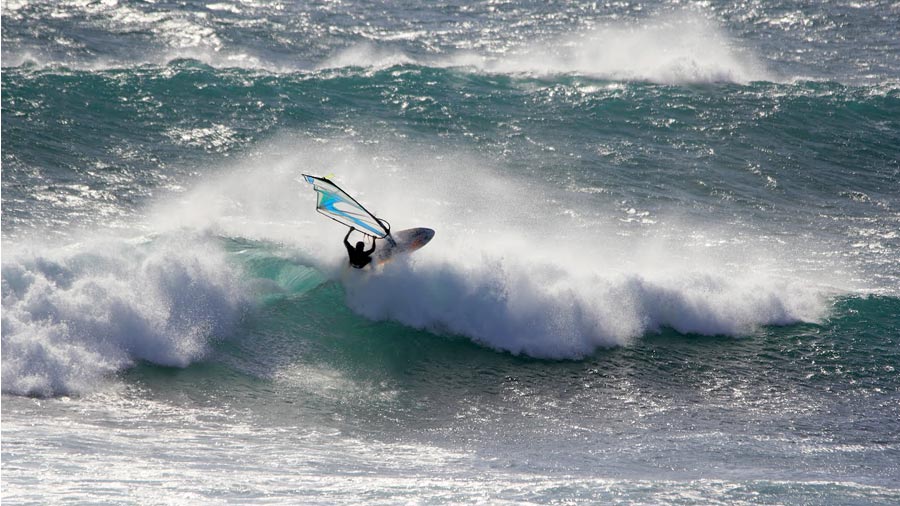 Nice conditions at Margaret River during the finals.

In the Open final, the four contenders were Klaus Twilling, Frans Den Hartogh, Nicola Cavicchini and local sailor Avan Griffith. Some solid sets provided for an entertaining finale. Nicola pulled off the near miss of the day with an extremely smooth jump over a mast high close out, which had the spectators on the edge of their seats. Frans was charging on the waves and also managed to score the jump of the day award with a stalled forward. Klaus landed some tidy forwards, but it was Avan’s consistently fluid wave riding which earned him the top podium place. He did, however, manage to put a hole in his partner’s sail in the process. 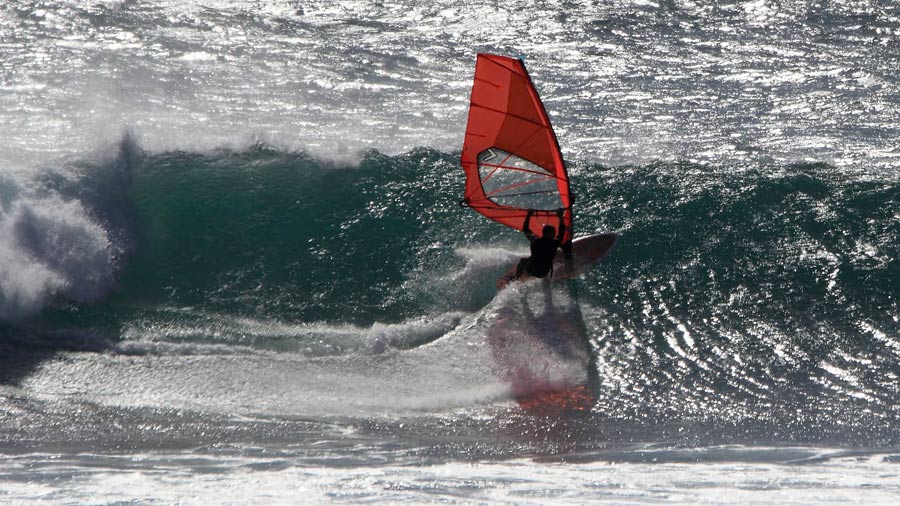 Graham Woods on a thick one

Last, but by no means least, was the Elite final with PWA Pro Peter Volwater, Graham Woods, Ash Nichol and Simon Peters all demonstrating exceptional timing on the waves. It was a close and enthralling competition; Ash came back from the brink of a smashing, somehow emerging from the white water to everyone’s disbelief. Simon utilised his local knowledge, reading the wave perfectly and selecting some sizable swell. Graham finished off a brilliant wave ride with a Taka, showing off great technique. But the eventual winner was Pro Peter Volwater, who performed consistently throughout the heat and landed a clean forward loop to seal the contest. Peter, who recently changed his sponsors, has a great start into the 2014 season. He already made it on the podium at the Lancelin Marathon in January. 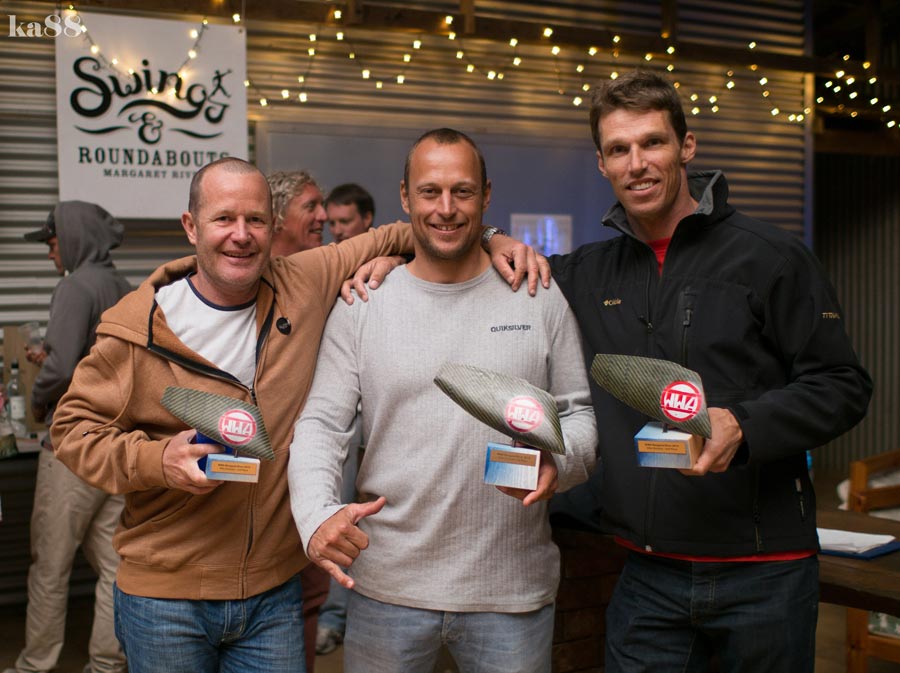 Wharnecliff Mill provided a great setting for the presentations and after party with wine tasting, wood fired pizzas and live music. A huge thanks go to everyone who contributed to the event including our sponsors Windforce, Severne, Starboard, Sail Repair WA and LimitLiss for providing fantastic prizes, E3 for providing energy drinks to power the sailors and spectators alike, Man Over Board for crafting all the fantastic trophies, Swings & Roundabouts for the wine tastings and Salento Catering for the delicious pizzas. WWA also raised over $150 for Margaret River’s local Surf Life Saving Club thanks to everyone’s generous contributions. It was a terrific turnout and great to see so many people getting out on the water; congratulations to all the winners and a big shout out to all the other participants, judges and volunteers. We hope to see you all again next year at one of WA’s most iconic wave locations -bring on Margaret River 2015.