Fanatic is proud to announce, that well known Dutch windsurfer Peter Volwater (H-24) has joined the Fanatic International Team! After 15 years with F2, Peter felt it was time to change. After Patrik Diethelm, Karin Jaggi and Bernd Flessner, Volwater is now the 4th F2 teamrider, who will change the board brand. 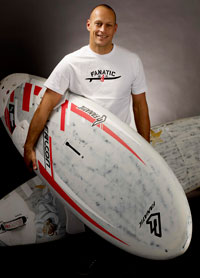 Peter is part of the PWA World Tour since more than 15 years and is one of the world´s best allrounders in racing and waves (8th PWA Slalom Overall 2009). Together with his countryman Pieter Bijl, he will lead the Slalom team but also will still compete in the Wave discipline.

Fanatic Brand Manager Craig Gertenbach: “I ´m very happy to welcome Peter to our Fanatic team. Peter and I first shared waves together in my hometown Cape Town when he was just starting his world cup career. I knew then he would be one of the world ´s best and he proved me right. So I ´m really glad to have him on our team, he will be a great boost to our new range of Falcon Slalom boards, but also as a top wavesailor we can expect a lot from him in the future, both in results and R&D!”

Peter Volwater (H-24): “I ´m very happy to be with Fanatic. An important reason for deciding to change is the new Fanatic board range presented for 2010, and the prospects of competing on these boards in the upcoming season.“

medea2009-12-27T16:25:27+01:00November 10th, 2009|
Subscribe
0 Comments
Inline Feedbacks
View all comments
This website is using Google Analytics. Please click here if you want to opt-out. Click here to opt-out.
0
0
Would love your thoughts, please comment.x
()
x
| Reply
We use cookies to ensure that we give you the best experience on our website. If you continue to use this site we will assume that you are happy with it.OkNoRead more