The Formula Windsurfing World Championships 2010 for Men, Women and Youth will take place from the 21st of March to Saturday 27th of March at Lake Potrerillos, which is located in the south of  Mendoza in Argentina. The lake is 15 km long and just 3 km wide. Windsurfing got allowed in 2003 on this water reservoir. The thermic wind normally starts around midday and blows with around 6 to 20 knots. But if the “Zonda” wind blows from the other direction over the 6000m high Andes, the windspeed can increase within a minute to 30 knots.

Marta Hlavaty (Pol-111), who is the reigning Polish, European and World Champion in the Formula Windsurfing Class is already there for preparation. Read here her report about her journey to Mendoza with a stop-over in Santiago de Chile, just when the earthquake happend. 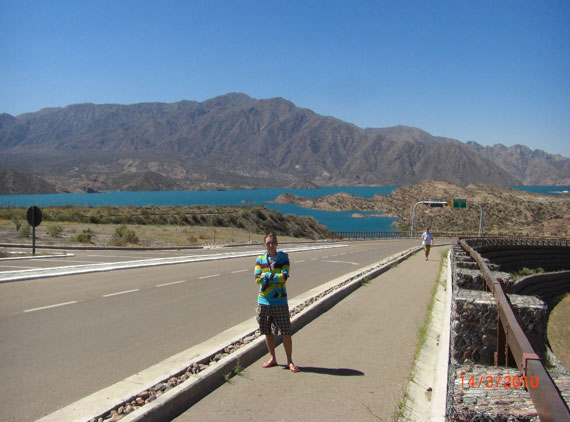 Traveling to Argentina. Everything was going as always. That is, 90 kg excess luggage, weighing, surcharges, convincing the men at check-in, that this equipment always flies like this with me, etc. Everything was normal until, on the route of the Madrid to Santiago de Chile, the pilot announced that we have to stop for 3 hours in Las Palmas in the Canaries Islands, because they need some medication for a patient on board. I suppose it was a fake, and the real reason was the earthquake in Chile.

It reached me only when the next announcement was that it is impossible now landing in Santiago, because there were just two strong earthquakes, and we fly to Mendoza or Cordoba. Delighted me, because not enough that I would avoid the place of earthquakes probably I would landed directly in Mendoza where I wanted to reach. After 10 minutes of circulatory up in the air appeared that the earthquake is over and finally we fly to Santiago, however …. what we met there, was a huge mass!!! First they withstand us on the plane about 40 minutes. As soon as we got off, it turned out that the check-in building does not work and they turned all people to the tent built up on the ramp of the airport. All the bags were dropped in one place, so everyone was to find the luggage and somehow reach the gate at the end of the tent, where passports were checked.

Everything would be quite simple, only that I was alone + 4 bags weighing 30kg each, and people where just trying to leave the airport as quick as possible, so they crowd hastily. For me that was quite hard with three 2,5 meter bags. Especially that one men just announced… There’s no point to hurry, anyway all flights will be called off in 30min cause one more earthquake is coming!!! Long to tell yet what was going on that airport, but eventually I managed to get on the delayed plane with the whole equipment and took off to Mendoza.

At Mendoza airport a guy from the organization was waiting for me to place the transfer of the regatta …:) Finally everything ended up better than anticipated. A place of the event is …. Potrerillos lake in Mendoza. My first thought was, hmm this is probably end of the world:) however it is a beautiful lake in the mountains, the wind is very variable and gusty, so for sure it will be interesting racing here. For me it is even better, that I can use my experience from tactics of RSX. For last three days wind is blowing 15-20 KNT, it’s sunny and warm. 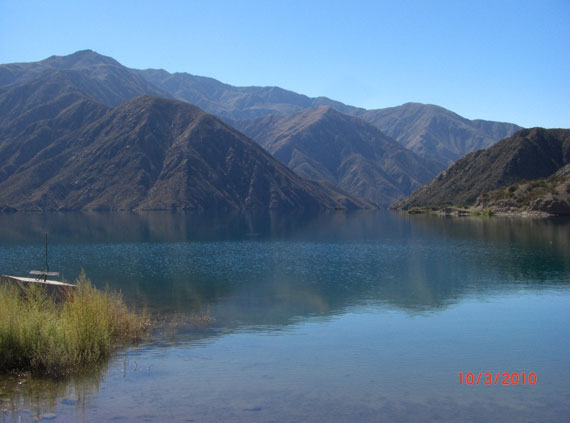 After a wrist injury that I suffered about 8 weeks ago, the hand performs better than I thought. I sail every day, and after so long windsurfing break I appreciate how beautiful it is to be able to play that sport:) The only weakness till now is, that so far few women came forward, I hope that until the start of the competition will reach this “end of the world” all the girls , who raced in last year and beyond. Due to the injury I decided to compete in Mendoza on the old sails, so as not to distract attention to the setting of new equipment. However, straight from Maui one of Maui Sails Team players, Gonzalo Costa Hoevel brought me one of the new sails TR 6, in size 10.00m. In the next news I’ll report how it works, because I write out a lot here. I will mention only that the Maui Sails Team did a great job this winter. Sail TR 6 works splendidly. In the running is nice and has a large range of adjustment on the boom while sailing, which gives a great range of adjustment to changing conditions on the water. Thanks to Gonza that he brought me this sail, I’m pretty sure that will be my main one on this competition.