Jesper Orth sent us an update from the Lancelin Ocean Classic, where a Slalom competition was held as well, which saw a close final. Australian speedexpert Chris Lockwood could win the Slalom discipline and could beat a worldclass fleet. On his heels followed Jesper Orth and Peter Volwater.

With a strong and solid 20-25 knots sea breeze the Lancelin Ocean Classic Windsurfing WA Endeavour Tavern Slalom saw successful 5 rounds of Slalom. With top sailors like Peter Volwater, Patrick Diethelm, Chris Lockwood, Dan Engdal and Jesper Orth, not to forget a lot of local talent, it became a high paced action to watch from the beach. 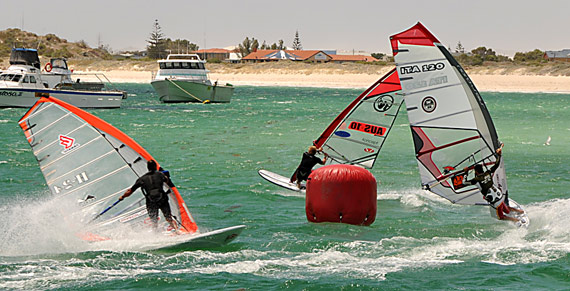 With the 2’nd mark just 20 meters from the shore, the spectators could enjoy world class jibing and fighting around the marks.

In the end it came down to the last round and 3 sailors were fighting for the win on nearly equal points (Orth, Lockwood and Wolwater). The final had to be rerun as a massive crash just after the start saw 3-4 sailors in the water. It was Jesper Orth leading but then catapulting, when his boom end was touched, going straight over Norwegian sailor Magna.

The final got rerun and this time speedster Chris Lockwood got the best start and hold it to the end. Jesper Orth could hold of Marathon winner Peter Volwater to secure 2’nd place. 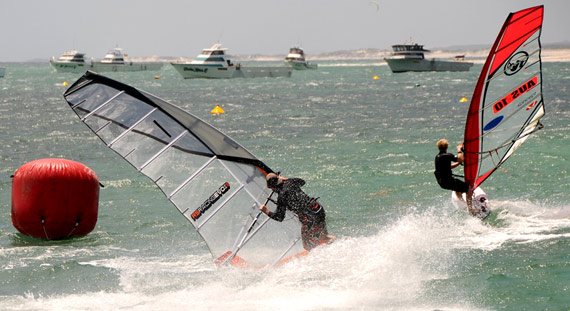 Chris Lockwood, the eventwinner, attacks Orth on the inside (Pic: James Torode).

Jesper:  “I was surprised nobody got hurt in the crash. Everything happened so quickly and I don’t think it was anybody foul. This just happens some times in racing. Lockwood sailed well and I was happy for him that he could take first place. In the end we where really close on points and it was the small things making the difference. This slalom was heaps of fun.” 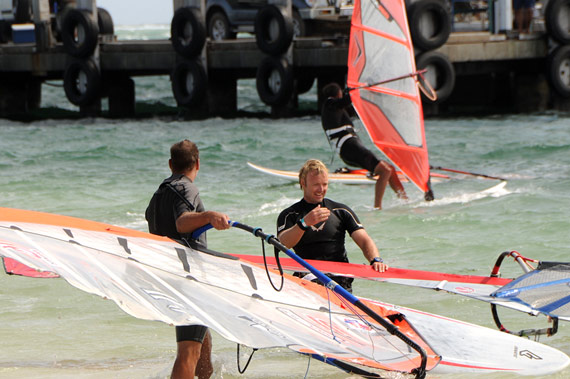 Jesper and Peter at the beach in a talk (Pic: James Torode).