Sarah Hauser was born in New Caledonia, but is living together with her husband Casey on Maui. She made her PWA debut in 2014 at the Aloha Classic, won the 2015 American Windsurfing Tour title and on top conquered the massive waves of Pe’ahi. In the beginning of February she had her third session at Jaws and she is one of a few windsurfing women, who has the courage to take on this challenge.

“When I pump to get myself into a wave, for half a second there is a part of me who wants to run away.” 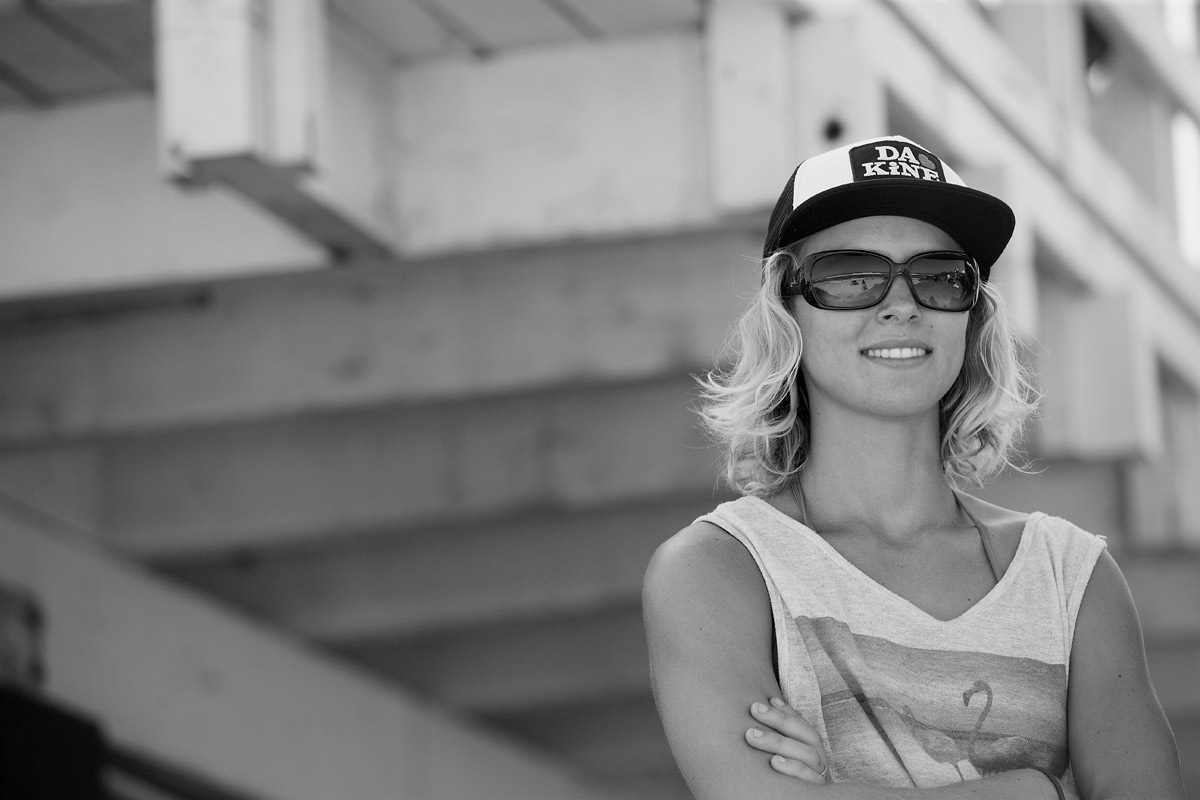 Continentseven: You are from New Caledonia, but how did you end up on Maui?
Sarah Hauser: I was 23 when I just graduated from Ensimag (it’s a computer sciences & applied maths engineering school) in 2012. I couldn’t figure out what I wanted to do. I had this old dream that I wanted to be a pro windsurfer but it sounded crazy especially after 5 years without practicing. I flew to Maui anyway, by myself, entered the Aloha Classic and ranked 5th. That’s how my career began and I fell in love with Maui… and with an American windsurfer – Casey Hauser – so it made sense to live there.
Continentseven: You windsurfed at Jaws on February 11 and rode some huge waves. How was this session?
Sarah Hauser: One of the best sessions of my life! Everything was perfect. Not too crowded, light winds so the waves were smooth, sunny, good vibes and of course big waves!
Continentseven: When did you first windsurf Jaws?
Sarah Hauser: April 5th 2013, my second trip to Maui. I got a ride with Kai Katchadourian, the Simmer Style team captain and master of this place and Francisco Porcella who paddled into some bombs on his gun after the wind died.

“I’m pretty sure a lip that size would snap her petite lil body in half in the wrong spot!” Casey Hauser 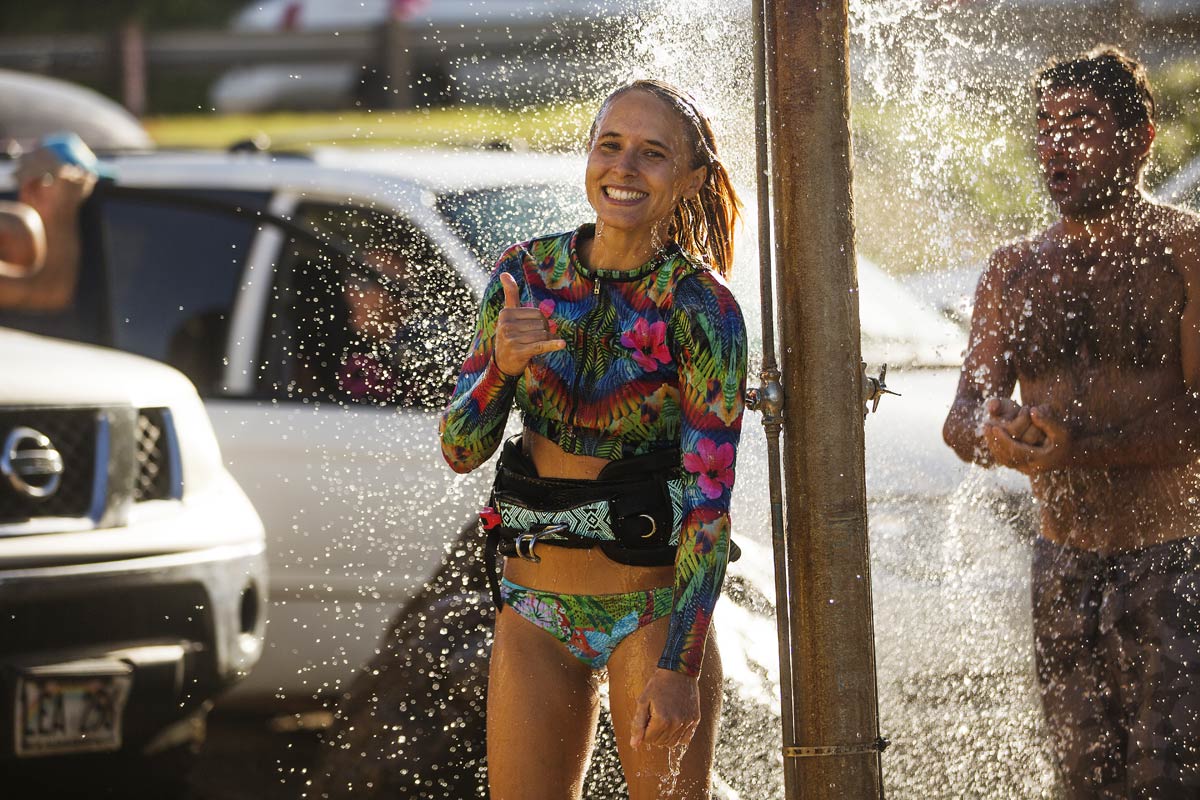 Continentseven: What does it feel to windsurf in Jaws?
Sarah Hauser: It’s hard to describe. It’s kinda like being shrunk: everything is bigger! The waves but also the chop, the gusts, the current, the sounds, the sprays, the mistakes…
Continentseven: How did you develop to ride big waves?
Sarah Hauser: I learnt to wave sail on the outer reefs in New Caledonia, at Ténia. The whole island is surrounded by a coral reef barrier so there are no real nice waves along the shore. To ride waves, we have to drive with a boat on a trailer, launch it and ride toward the reef 20 km away. It’s a mission but the waves are gorgeous, big and powerful!
Continentseven: Was it a tough decision to say, yeah I go for it and windsurf at Jaws?
Sarah Hauser: Not really, I work very hard to be able to handle the worst out there. I did feel a lot of fear the morning before going out especially because we’ve had so many big swells this winter and surfers have been pushing their limits paddling into the biggest waves ever. So I was surrounded by insane wipe out videos, crazy pictures and stories which makes it an even bigger deal.

“Sarah first caught my eye a while back when I saw a pic of her on a big bomb in New Caledonia. Those reef passes are heavy and she was arcing a tight turn on a big one. Jaws can lure you into a false sense of ease and then can take you out. I’m quite surprised nobody has died there yet. Hopefully nobody ever will.” Josh Angulo

Continentseven: How do you prepare and train for big wave windsurfing?
Sarah Hauser: When I was a kid I used to go spearfishing with my dad so I’m good at holding my breath. Here on Maui I did a couple of free diving workshops with Davide Carrera (Italian world champion). He’s a great teacher. With relaxation techniques I was able to triple my time in static breath hold! I also do under water rock running and I work out at Deep Relief, the Maui athletic training center. Ian Walsh comes there too so it’s not rare to include apnea in between our rounds of sprint, burpee, pull ups, etc.
Continentseven: Are you using special equipment out there like a longer heavier board, a safety jacket,…?
Sarah Hauser: For the gear I am still figuring it out. Last time I had my Blacktip 4.5 sail on my custom Tabou Da Curve 64L that I use everyday with the MFC quad set (QS_200). It felt great: fun and safe! But a little more volume could help catch the bigger waves. For wetsuit I wear a padded shorty and a vest on top. I wish I had a Patagonia wetsuit with the air bottle that pops you up, but they’re not available anymore.
Continentseven: How many times did you ride Jaws already and how many good rides do you count until now?
Sarah Hauser: I went to Jaws 3 times. I only had 1 or 2 good rides the first two times. The last session I got 6 waves! The last two ones were “insides” but they were still bigger than most of the waves I ride at Ho’okipa. 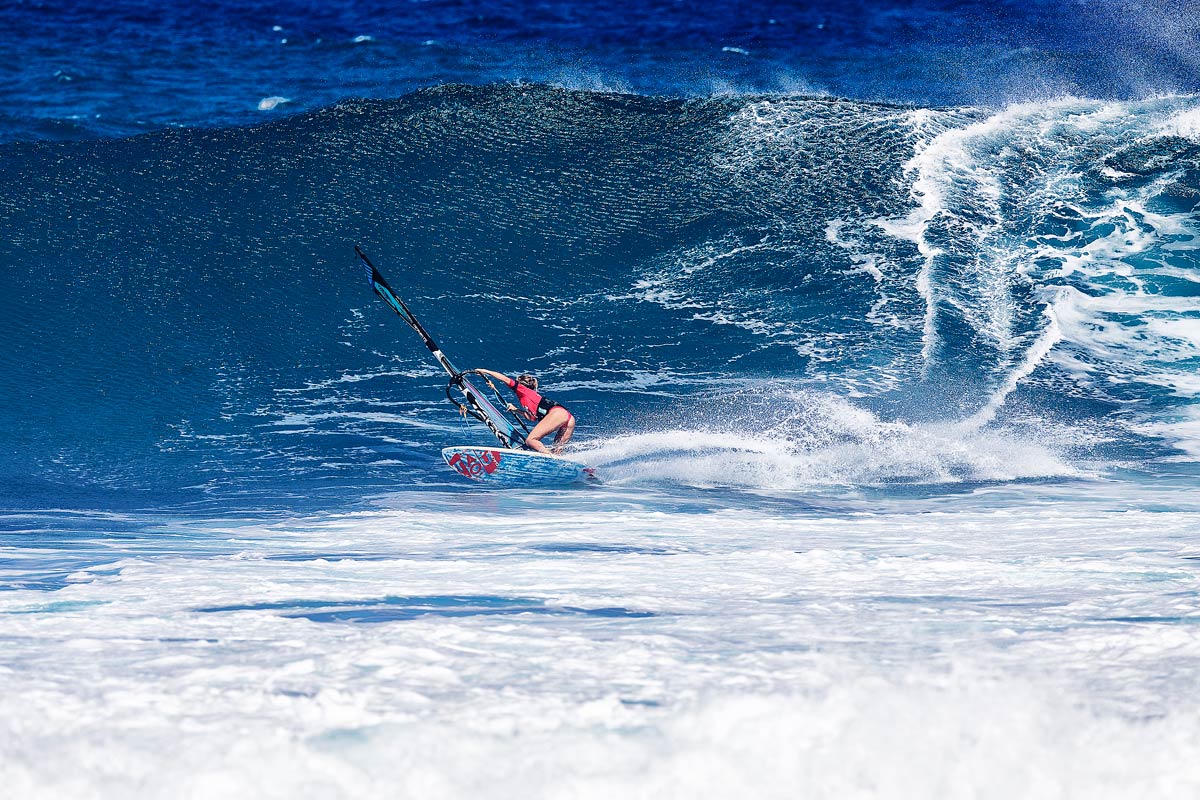 Continentseven: Are you scared out there and how do you cope with fear?
Sarah Hauser: Yes it’s very scary out there. When I pump to get myself into a wave, for half a second there is a part of me who wants to run away. I haven’t wiped out at Peahi yet. I don’t even know if my body can handle it. Davide Carrera says “once we accept the idea of death, we live better and deeper”. I think that’s how I cope with fear: by accepting that what I fear might happen. It doesn’t mean that I don’t care about my life, quite the opposite: until I die I want to enjoy life to the fullest and not miss things because of fear.
Continentseven: Did you already have any troubles out there at Jaws?
Sarah Hauser: On my first session the wind completely died. I missed a wave and had to dive under the next one. I was on the shoulder enough so that I didn’t get pounded. But my gear did. My carbon boom got sliced on each side, mast and sail got destroyed too.

“When I see her fall in the impact zone anywhere when it’s big I’m never exactly comfortable until I see her up and out of harm’s way.” Casey Hauser

Continentseven: You are the only woman out there in these gigantic sets of waves, the home turf of the big watermen. Do you get enough respect?
Sarah Hauser: Well in 2013 Katie McAnena was out there too! And Vickey Abbott moved from Capo Verde to Maui last year and bought a jet ski, she’ll be getting sick rides at Peahi very soon! But generally when it’s big on Maui the guys are awesome. They give tips and cheer. Nobody tries to steal my waves or anything like that. There is a very good vibe on the water.
Continentseven: What are your future plans, maybe traveling with Jason Polakow around the globe hunting for the biggest waves?
Sarah Hauser: I’d love too! Hahaha… It’s not easy being a female pro windsurfer. Every year it’s a fight to find the budget to train, travel, compete or just live. Hopefully the movie “Girl on Wave” that I’ve been working on will help bring some more attention around our sport which is so beautiful.
I’m planning a trip to my home spots in New Caledonia this year. Then I will do the first 3 stops of the AWT in Oregon and California. Hopefully after that I will be able to make it to Europe and enter the PWA competitions in Pozo and Tenerife. Then I might be invited to an event in French Polynesia, then maybe a trip to Baja and then Maui!
Continentseven: Thanks for the interview and good luck for your next rides!

medea2017-03-23T13:46:30+01:00March 7th, 2016|
Subscribe
0 Comments
Inline Feedbacks
View all comments
This website is using Google Analytics. Please click here if you want to opt-out. Click here to opt-out.
0
0
Would love your thoughts, please comment.x
()
x
| Reply
We use cookies to ensure that we give you the best experience on our website. If you continue to use this site we will assume that you are happy with it.OkNoRead more