Iballa Moreno was one of the four ladies – together with her twin sister Daida, Nayra Alonso and local Nicole Boronat, who got the chance to compete in the men teams at the this year´s Fuerteventura Wave Classic event. Iballa could win the event together with her team and she also could beat the guys in some heats. Now it was definitely time to ask her about the event and about a competition in which boys and girls were competing together. 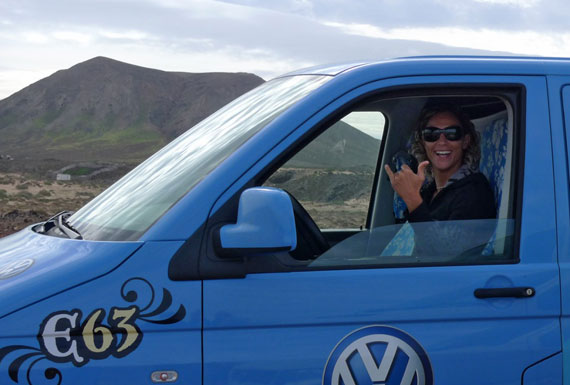 C7: Could you describe the conditions you were sailing in while the 2 weeks contest period!

Iballa: Yes, it was a super long waiting period but time passed by really fast! Conditions were good, but I´ve seen them much better on Fuerteventura already. For sure great action and good level out in the water, so we were taking advantage or what mother nature gave us during the 12 days of competition.

C7: How was it to compete against men? Did you rip harder than normal, when you compete against ladies?
Iballa: It was a great experience. I was out in the water just having fun and taking advantage of the fact we were only 4 people out in the water!
I dont compare once I am in the water with boys or girls. I just try to do my own thing, have fun and ride the waves best I can. I was still getting use to my new gear and I was happy with the results, because the equipment seems to be working really good for me.

C7: You could beat some boys while the FWC? How was your feeling then?

Iballa: Hehe…When I came out of the water people were telling me that. I was happy for sure, just because I had a good heat and felt confident with myself in the waves. I guess Dario and Eleazar had a bad heat because they are both super good riders. Sometimes its a matter of luck and choosing the right waves. 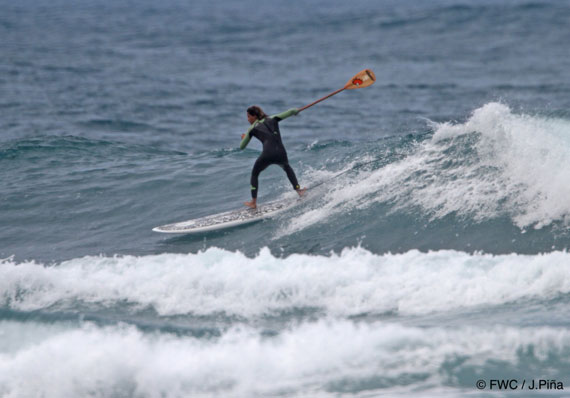 Iballa on her SUP

C7: Did you expect to win the event with your team? What were the reasons that you scored the best out of your view?
Iballa: Not at all!!!! When I first saw my team I was wondering, how we would make it because the only good rider was “Musso”. But Jules had a very good day and also Albert, the local boy, with a second position in the first day of competition. Patrick had average good results also, which helped us to keep being on the top.
On the second and last day of competition there was only one first place and Musso had a second. But that was enough for keeping the lead and being the first team in the overall result. So in general it was a good team work!

C7: Do you like the competition format of the FWC and would you like to see more events with this format?
Iballa: Yes, its different, but only because its a FUN event, not a real competition from my point of view. In a professional level for sure this format would not work. So its good to have this kind of format for a fun and easy event like this one. It would be really great to repeat it! It was a very good experience for me.

C7: Did you sail more time compared to a very competitive competition?
Iballa: Yes, I guess so, especially because we were sailing in the waves with longer heat periods. Just enough time to enjoy it on the water, time enough to have mistakes and time enough to recover and get some nice rides as well!

C7: Will you participate in some men wave competitions in the near future, perhaps on the PWA tour?
Iballa: I don´t think so! PWA is at a professional level and its good to have women with women and men with men.
But for sure in more events like this I don´t mind to compete with the boys! This was a great warm up for the upcoming 2010 PWA tour. 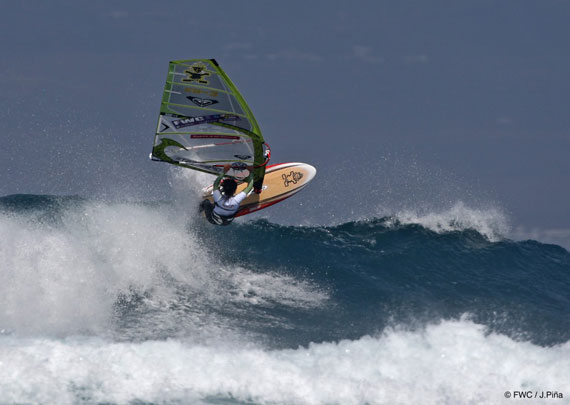 C7: Was there anything missing at the FWC out of your view?
Iballa: Nothing. It was a very relaxing contest. No stress at all! Just sailing in the best spots and best waves. The organizer did the best he could to keep everyone happy.
Maybe we were missing one BIG wave day, but we can not fight with mother nature. So we did the best we could get out of the conditions we had.

C7: How do you see the chance to have an waveevent in Pozo, Gran Canaria this summer? Is there a realistic chance that we will see you competing in a ladies PWA wave event?
Iballa: I don´t want to think that we won´t have an event in one of the best spots on earth. I am sure something will happen in Pozo Izquierdo! 🙂

We hope so too and wish Iballa a successful season 2010.