In the northern part of Brazil, close to the world famous spot Jericoacoara, in the state of Ceara, the slalom nationals just got finished some days ago. Even international competitors like Alberto Menegatti from Italy and Kurosh Kiani from Denmark showed up. 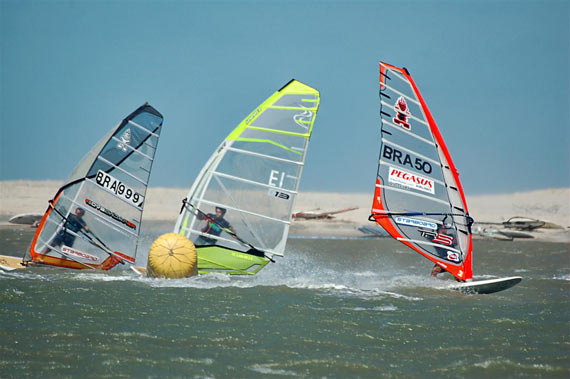 Action at the mark in Camocim. Gabriel Browne in front of Kurosh Kiani and Wilhelm Schurmann

“The venue for the races was amazing. The course is exactly where the river gets together with the ocean, so there was strong current and big chop. The wind conditions were very good for slalom racing, from 17 to 30 knots. I was using most of the races my TR5 7.0 with Starboard Isonic 86 and 111. The first day I started the event with two bullets, but I made some mistakes and finished the first day in third place. On day 2 the wind got much stronger and I like this strong wind conditions. I had some very good races and manage to recover my mistakes from the first day and finished the event in 1st place ! I’m very happy right now !!! Now I will come back to Fortaleza to continue the FW training for the last FW grand prix of the year. I’ll do my best there and hope to finish with a good result at my home spot.“ (Gabriel Browne) 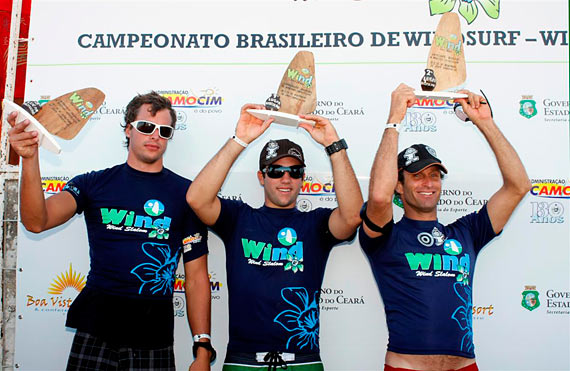 The top 3 sailors in Camocim

Interview with the winner Gabriel Browne:

Gabriel, you just competed for two days at the river mouth of Camocim, Brazil! How many races did you go for?

Yes, we had our slalom nationals there. It was very nice. We did 13 races in two days of competition, which were a lot of races. In the end we were extremely tired.

How many could you win?

Everybody was sailing really good, especially when the wind was not too strong. I had won 5 races. I did some mistakes on the first day, but in the end I could recover them.

Some words about the conditions and your opponents?

The conditions were perfect for slalom. On the first day of competition the wind was from 16 to 22 knots.This day we had lower tide, so it was easier to race. On the second day the wind was much stronger, from 23 to 30 knots in the last races. As the tide was higher and the wind stronger on the last day, the chop was massive and very hard to race. My opponents were sailing really good. We had international competitors like Alberto Menegatti and Kurosh Kiani. Also I won’t forget Wilhelm Shurmann, who is a great competitor. He was doing very good races in all conditions and gave me a very hard time out there.

Is the feeling even better, when you win a race in your homecountry?

I was trying to win the slalom nationals since 3 years ago. Now I’m very happy to have this title. It´s always good to win a race in your homecountry. Camocim is close from where I live, so I had many friends there.

Which gear were you on most of the time?

This was a great final result after a hard long Slalom season 2009! You must be very happy!  Where do you see yourself in 2010 on the PWA tour. In 2009 you were ranked on 22nd position, but you missed 2 tourstopps, South Korea and Germany?

The PWA tour for me is a great experience. I can see that I’m learning more every year. This year I missed 2 events and at the stop in Costa Brava I was extremely sick and could not sail all the races. But in the end it was good. I did a lot of races in different conditions. In 2010 I hope to have better results and learn more.

Will you stay on the same equipment sponsors  for 2010 and do you plan to participate in all PWA Slalom tourstopps in 2010?

I will probably stay with the same sponsors in the upcoming season. 2010 I’ll try to participate as much as I can on the tour.

What are you winter plans?

This year didn’t finish for me yet. I still have some Formula Windusrfing  events to do. After that I will have a break and stay with my family. I think I will go for a snowboarding trip with friends to Austria in the beginning of next year.

Would you wish that the Formula discipline would see a comeback on the PWA tour?

For me Formula Windsurfing is a great discipline. We can race in almost every condition and is a different feeling for me. I am still doing many FW events. Out of my view the class is very organized and they will grow up a lot. Maybe together with the PWA it would be good for windsurfing in general.