Kurosh Kiani (DEN-13) recently participated in the IFCA North American Slalom Championships at Miami, Virginia Key, Florida. The event were  held from the 21st till the 23rd of October 2011. Directly after the event Kurosh had been announced as the winner in a close decision against Wilhelm Schurmann. A few days later the result the result got changed and the Danish top racer , currently ranked in 25th position on the 2011 PWA Slalom tour, lost the victory and slipped down to second in the overall ranking. Wilhelm Schurmann could take the victory in the end. Read the full story from Kurosh Kiani! 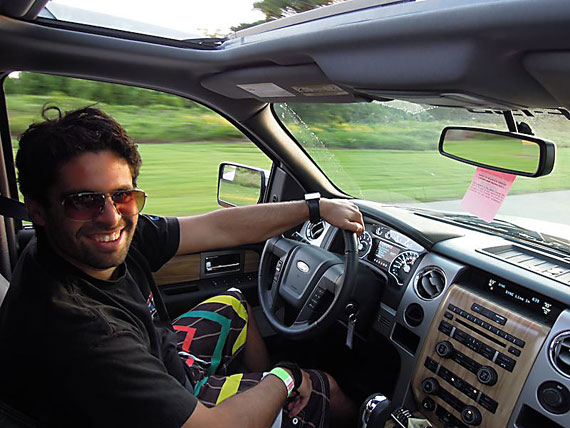 Just as I thought the end of the season had come, there was a change in my plans. This year, after the last worldcup on Sylt, I had the opportunity to get on the plane and head for the sunshine state of Florida. More specifically the city of Miami, where I was to take part of this years IFCA North American slalom championships. Now I must admit, that I was pretty tired of traveling before I set off for Miami, but that feeling was soon about to change.

I landed in Miami an evening, and was picked up by friends, and the next morning was rainy which forced me to just chill out inside, without getting so have any sort of look around. Eventually the rain stopped and I went out for a cruise before I picked up my friend Sean O´Brien, who was also attending this event. We couldn’t hit the water as it was evening time, so we decided to hit the clubs and have some fun! It is Miami after all. 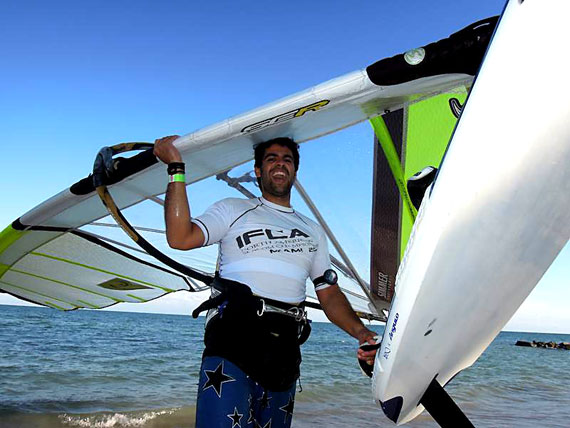 Kurosh enjoys Miami from the first day. Here with his big kit in shorts and lycra.

We then had one day to sail before the event, but the wind never really kicked in so I just spent the time unrolling some new sails that I had brought for this event and taking a look at them, as it was the only thing I could do. The competition was set to start out of Virginia Keys, which is in the south Miami area and a perfect place for windsurfing. I was actually surprised by how great the weather got and the temperature of the water even better. 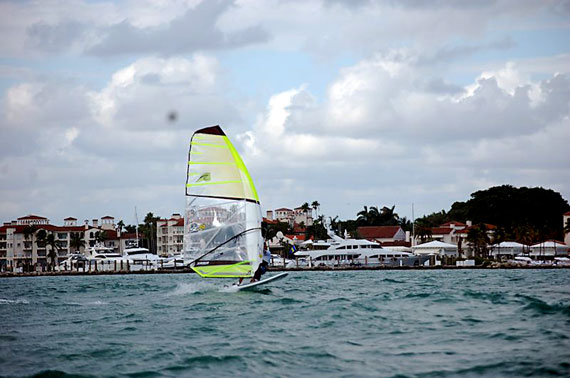 Cruising in protected area. And already on new sails?

Like many national and continental championships of this kind, you always tend to find the true windsurfers of the world. The guys who really have their motivation in the right place, the guys who will travel across the country to meet with likeminded people and the people who make it happen by organizing all of it. Like we have heard before, our sport is running at its purest form now being powered by the people, who put their hearts into the sport. This event was not much different. I have met by people with that exact same description.

By the time the start of the event came, the wind had decided to stay away, at least for the first part of the day until it slowly filled in and we got called out for racing. We did many attempts to do racing, but the wind just wasn’t giving it to us.
After an amazing lunch the wind filled in more, and we went out to do 3 races. In super light wind conditions it was a big battle. It was close in the top rankings between Australian Sean O´Brien, Wilhelm Shurmann from Brazil and myself. I was on my 9,5 and my big 84 Angulo board all of the time. 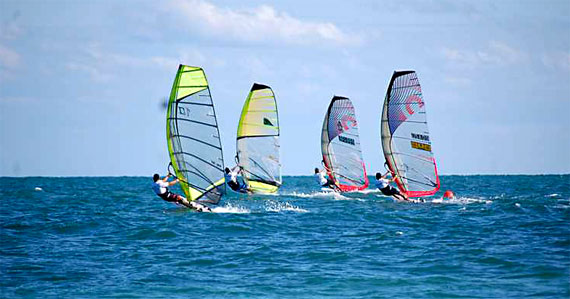 Light wind racing at Miami with Wilhelm Schurmann and Kurosh Kiani in the lead followed by Diego Domeniani.

After the racing Sean and myself fired up the truck to hit Miami beach, but after a big dinner, there just wasn’t anymore power in us, and we had to throw in the towel and get some sleep. Saturday morning, when we finally found our way to the beach – after getting lost several times – the water was nearly glassy. Oh well, we have tried that before, so it was time for some chill-out and catching up with the guys.

The wind kind of filled in, but then not really. We went out and tried to do racing, and after pumping like madmen, we decided that it just wasn’t going to happen, but at least we gave it a try. After hanging out on the beach for the rest of the day, it was again evening time, and it was time to head back into town for a big dinner with the guys.

Sunday would proof to be the day when it all was going to go down. When getting to the beach the water was glassy. It didn’t look good, and eventually some rainclouds came by to give us a visit as well. I was actually getting ready to pack my gear up slowly, but just as I started taking off the footstraps of my board, a slight breeze came in, and shortly after that I was back on the water, because it was now actually windy.

We didn’t have any initial rounds, just different fleets, so it was very easy to get many heats trough. We went out and started out doing 5 races more or less back to back. The wind was still light, but enough for racing. Again there was a big fight for the start and the marks. We took turns winning heats, and it was actually super fun racing. A little swell was rolling in as well giving us a little bit of wave action at the marks which just made it even more fun. 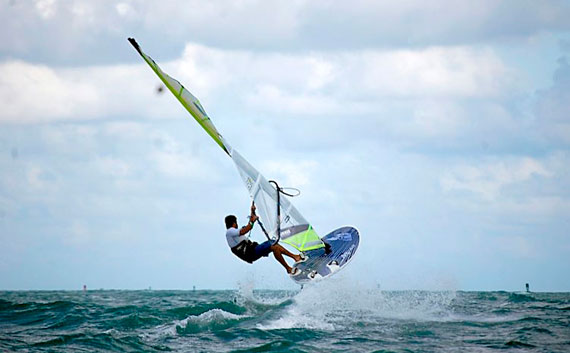 Kurosh jumps at Virginia Key over little chops with his big racing gear.

After yet another great lunch, we set out to do another 3 races which brought us up to a total of 8 races for the last day. So all in all 11 races over the 3 days ,what is not bad. It was close race all the way through, but a very inconvenient OCS handed the title over to Brazilian Wilhelm Shurmann, who then could take the overall title. It was a bit of a pity for me, but really I was just stoked to be having the time of the year in a relaxed environment and enjoying this great city which offered the best of conditions for me: great windsurfing and great city life. 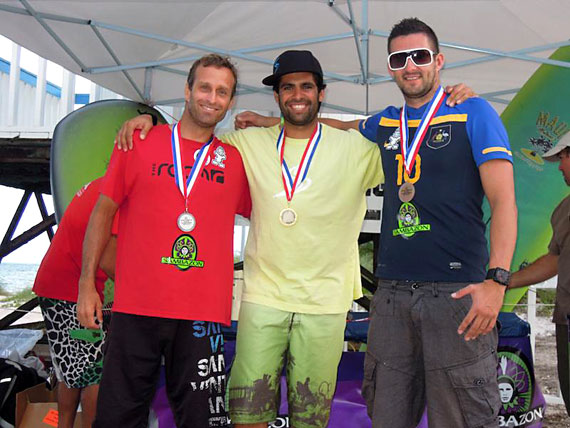 The top 3 sailors. Kurosh, who alreday had won the event, then got anounced as the number 2 and Wilhelm Schurmann became the winner. Sean O´Brien followed in third.

Organizational wise it was truly a great event, and it was especially great to see so many young faces who were battling it out with each other. So if you are thinking about trying out your luck with racing in the USA. Be prepared for great atmosphere, great people and of course some great racing. 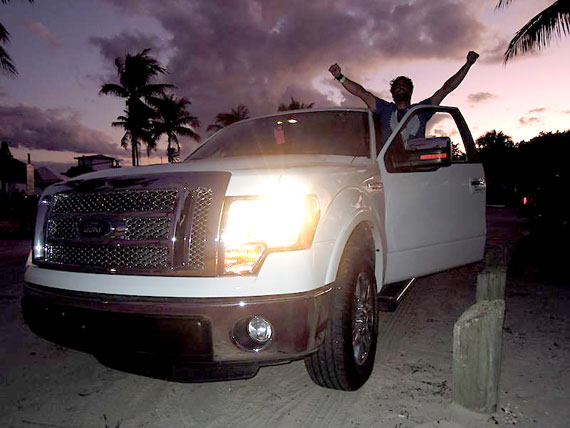 Kurosh with his pickup. What a nice rental car!

Miami is, in my mind as good as the mainland United States gets at this time of the year and for the winter time. The weather is comfortable and you will be out sailing just about every day, and on top of that, you will have great times in a city with an amazingly high activity level. I can just say, I will come back here in the future. 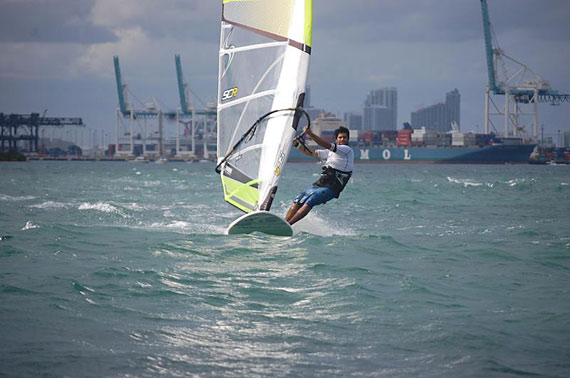 Mr. Kiani in the middle of the bay, where big container ships enter to get loaded at the docks.

Now its really getting winter time, and the hiatus time has come until we start up a new season in 2012. Until then, aloha from Kiani

clone stamp and blend my friend

I have no photoshop skills what so ever. I wouldnt know how to do it? 🙂 ..

But thanks for the tip, I will start learning photoshop.

With all your photoshopping skills couldn’t you take off the black dot on all the shots??