This year the Gran Canaria Wind and Waves Festival in Pozo Izquierdo, Gran Canaria marks the opening of the PWA Wave world tour and draws significant attention to the windsurfing world.  From the 14th to the 20th of July the best PWA wave windsurfers will battle in nuclear winds for a place on the podium. 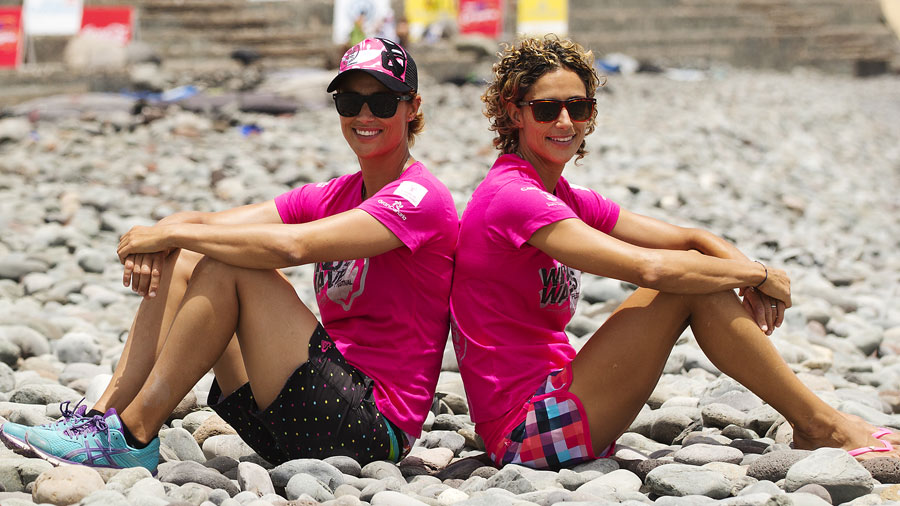 Read the full interview with Daida and Iballa Moreno

Continentseven: You have been organizing the PWA Gran Canaria Wind and Waves Festival for the third consecutive year. Only a few days are left until the first day of competition. Are you excited about that?

Iballa Moreno: Yes of course! As a windsurfer, because it’s the first wave event of the year and it’s at our home spot and of course as an organizer because we are able to show our spot to the rest of the world and bring the best sailors here! It’s a great show to see and share.

Continentseven: What’s the most stressful part of running an event?

Iballa Moreno:  It was pretty hectic during the last two weeks, but at the same time we do it with lots of love for the sport, preparing every single little detail. So, we don’t miss anything for sailors and spectators.

Daida Moreno: The most stressful part for me is, when it comes near the date of the event and some plans A are not working and we have to go through plan B. This year we scheduled everything earlier so everything is coming along smoothly.

Continentseven: And which aspect of organizing a windsurfing event fulfills you most?

Iballa Moreno:  To see every one happy with the final results and there are no mistakes throughout the event…if there is any, try to write it down and fix it for next year. This is our third year and I think we have done a pretty good job….but not only Daida and me! All the people behind. They are a very important part of the organization! Our Club Morenotwins has great people being part in the organization.

Daida Moreno: To see everyone happy with the result of the event, not only competitors but also international press and general public and we have activities for everyone during the week, kids, youth and adults.

Continentseven: How hard is it to concentrate on both, the organization and the competition itself?

Iballa Moreno:  Once the contest starts we don’t have to focus on the organization anymore, but we will take care of the press, what we already did at all other events on tour. We are going to focus on on our competition and our sailing. Everyone in the club has a responsibility and everything has been taken care of. We are very proud of them.

Daida Moreno: Previous to the event everything is stressful, but once it’s running it’s quite easy. We had a total of 35 people collaborating in the organization and helping. Young people, windsurfers, and with a lot of good energy everything is possible. For me it’s a big responsibility, but as I say once it’s up and running we only concentrate in the event and to make everyone comfortable to do their job such as national press, international press, sponsors, PWA, competitors and so on. 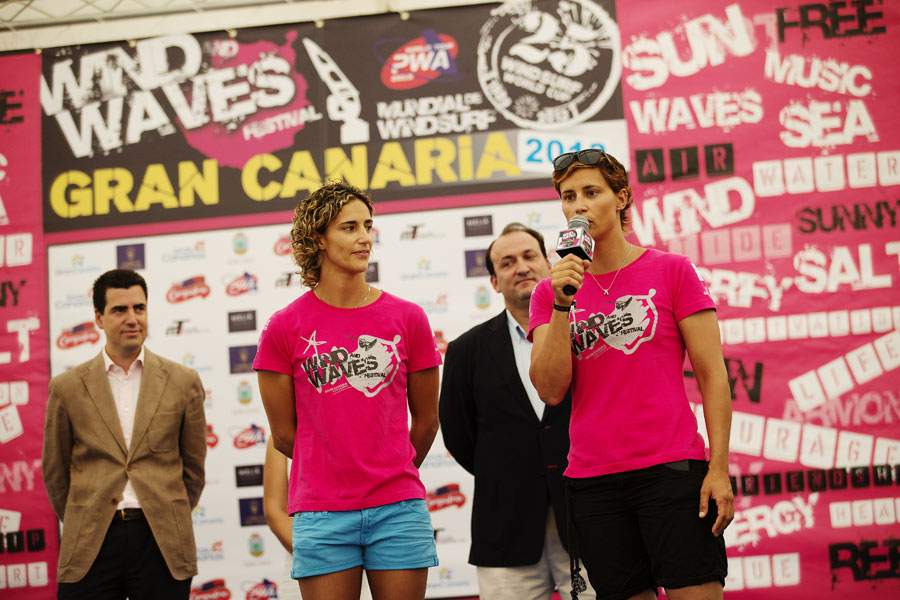 Continentseven: The PWA looks bigger and stronger in 2014. 14 confirmed events. 7 wave events for men and 6 for the women. Does that fact help to find the fundings for your own event?

Iballa Moreno:  Well, we don’t know many events yet. They are in calendar, but not confirmed. But it looks like its going to be a good year. Women are a really important part of PWA and the sport in general and we shouldn’t allow any organizer to choose to have women or not women in their contest. I think it’s a mistake and sad to see this happening in the XXI century still. Luckily, the most important events on tour have the women. The ones not having women in are small events to me and have half less importance.

Daida Moreno: I rather concentrate one by one and see what happens meanwhile. A bigger tour obviously helps, but this will have to be in a long term. This year we haven’t been able to find private sponsoring, so it’s quite hard to run a World Cup with low budget. We always say the attitude is always to do more for less.

Continentseven: For sure you will have some event news for 2014. What will be the highlights of the event?

Iballa Moreno:  We will have it all. Besides the main sports PWA event with best wave sailors and a junior event we will organize to promote the young wave sailors and also a tent with concerts, activities for all ages etc… it will be a fun week!

Daida Moreno: Last year we did a quite big difference compared to 2012. Tor this year we outlined many details and internally made a huge difference to be more productive. Outside structure will be similar as last year. We hope we get some great days of action and for us it will be good enough. Here you can find details, great concerts, activities for kids, windsurfers and many more. We extended the event and organized a prior weekend to do the local trials for the main event, a windsurfing outlet, beach cleaning, football world cup in big screen in the tent and much more: www.grancanariawindandwavesfestival.com

Continentseven: Since when are you working to organize the Gran Canaria wind & wave festival 2014 and how many people are involved?

Iballa Moreno:  Lots of people are involved. Daida and I are the visible faces, but behind we have a great group of friends helping us.

Daida Moreno: Great friends, great workers and a great team. In the main board are 7 people, and during the event around 35.

Continentseven: You and your twin sister are prominent role models for the sport of windsurfing, on Gran Canaria and all around the globe. Does this help in organizing an event like this or do you have the feeling it doesn’t matter?

Iballa Moreno:  I don’t know. We do have the experience of running the tour and saw a lotof events worldwide. We have seen around what we like for our event at our home spot. It has been a great challenge and a great experience to organize this event and every year we are making it bigger and better with the budgets we get. Our favorite sentence and the vision of the club is “To make more for less”. We do get less budgets, but slowly we are making more for the sailors and for the public in general.

Daida Moreno: I think it helps, but our main goal has always been to promote windsurfing and motivate people to practice it, specially kids and women. 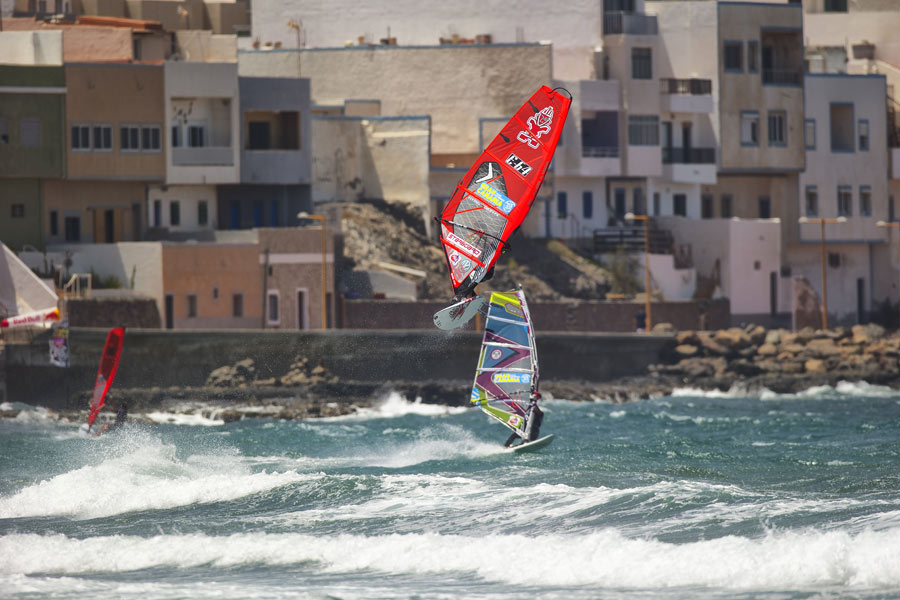 Continentseven: The men’s fleet will be a 32 fleet again in 2014. 19 men are already on the entry list, some will get a wild card, some need to qualify for the main event. Will you run trials?

Iballa Moreno:  Yes. We do have two wild cards and the national federation has one, which was given to Ramon Pastor Maltas. We are going to run a little event two days before the main event and give the two slots to the best two local riders. We are running it with Moritz Mauch, Alessio Stillrich, Pablo Ramirez, Jose Romero, Eleazar Alonso, Jonas Ceballos, Eric and Aleix Sanllehy. (editor’s note: 8 riders go for two places and the PWA will run trials for further 8 places).

Daida Moreno: As Iballa explained, it’s quite difficult to enter into the main male event. We only have two wildcards, and many of our local riders are out of the main event due to their qualification from last year (most of them could’t go to Maui). So we will run a little local trial event prior PWA event.

Continentseven: 17 ladies registered for the this year’s event. That’s more than the half of the men’s fleet. Are you happy about that rising number? And that is mainly thanks to you.

Iballa Moreno:  Yes, it ‘s a good number for sure. I think we are going to be missing some good names this year like Karin Jaggi (at least not 100%sure) and Laure Treboux. But still we see lots of young girls coming on tour! Really happy about that.

Daida Moreno: We were stoked to see the entry list. It was great to see good numbers. We were still missing great sailors such as Nayra Alonso, Laure Treboux and Karin Jaggi. Let’s see what the future has for the girls fleet. For sure I’ve seen a big change already. Many girls are training in Pozo months prior the event and that’s the way to go! 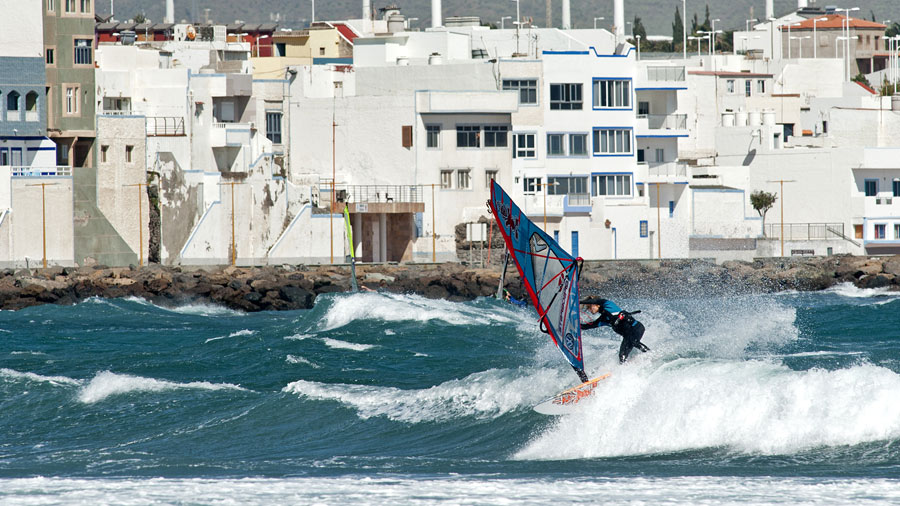 Continentseven: What makes Pozo so exciting and why should people follow the action of the 2014 Gran Canaria Wind & Waves Festival?

Iballa Moreno: Pozo Izquierdo is perfect for running a good event. We normally have lots of wind and good action in and off the water. You can follow the event like in www.pwaworldtour.com and also on our event website www.grancanariawindandwavesfestival.com. You can follow us also on Facebook, Instagram, Twitter and all social network!! We have an incredible team making updates everyday for you.

Daida Moreno: It’s simply the most radical event on tour, windiest, high jumps, special conditions. You can follow the action through live stream and will see the most radical moves ever seen, it’s really spectacular and show you must see. Luckily we have great international press covering the event such us Continentseven and expect to have great statistics for this year and to secure the event for the future.

Continentseven: A last one. Who will win? Men and Women.

Iballa Moreno:  Yeah, there is a really high level! And great new names like Jaeger Stone, who is on fire and will be competing in the whole tour this year. Brawzinho, Ricardo Campello, and of course the local riders!!! It’ s going to be difficult to bet for a name….But I think Philip is on another level and will come back after Hawaii with lots of power and stepping up the level in the water. For the girls..Daida is on fire! What can I say….

Daida Moreno:  That’s a complicated call. In the men’s fleet anything can happen. We had seen this summer Brawzinho and Swifty coming over a few times for training prior the event. Victor and Phillip are also killing it, Dani Bruch, Ricardo.. a really tough call. We also have seen young sailors like Jaeger Stone around really focused and with good wills. Iballa is sailing great, had seen Justyna sailing good as well and Silvia Alba is also killing it. As for me, I have been 5 months this winter with a huge foot injury. Still not 100% but I would love to be on podium at my home spot.

Continentseven: Thanks for the interview and see you soon on Gran Canaria!!!!! We are looking forward to some great days at the event!