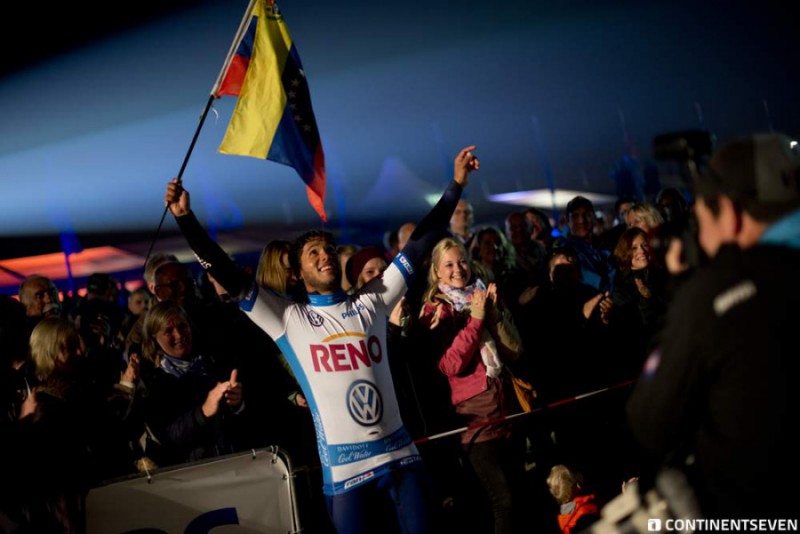 Friday October 3rd, a public holiday saw wonderful weather with light winds and a lot of spectators on the beach.

The Philips Night Session was scheduled for 8pm. It was a foggy evening with absolutely zero wind and just a few waves. The participants had two attempts each and got accelerated by a winch. During the first round most of the riders had a hard time, because of the heavy battery on their masts to lighten up their rig with led lights. Tonky landed a Ponch straight on the beach with his fin stuck in the sand. How cool was that. Amado slided through a Double Flaka. For the second round, the lights were taken off and we saw more action.

The highlight of the evening was probably, when Ricardo Campello landed a Pushloop. It was huge surprise to see such a move in a tow-in competition, but Ricardo is always ready for a surprise. Ricardo spotted a wave in front of him, had excellent speed and went for it. He said, he wanted to do something different and it paid off. It looked so natural. The Venezuelan received 44 points for that move and he finished on the second place with this jump.

For his second attempt, Gollito Estredo started a bit further outside, gained a lot of speed and landed a perfect Burner Funnell and won by 1.5 points difference with 45.5 points.

Steven van Broeckhoven, one of the world best tow in riders, did not manage to get enough speed through the winch and did not land any move.

Raffael de Windt was a bit unlucky. He landed a perfect double Flaka just in front of the massive crowd, but he missed just a few points to make it on the podium. Great performance by Raffael!

The night session was a good success and in the end the the Carribean riders were dominating the show.