The top 32 sailors fought today for the top places in the first single elimination. The first heat got started at 11.00 in very strong offshore wind and in the end the same two riders are on top. Gollito Estredo and Kiri Thode. 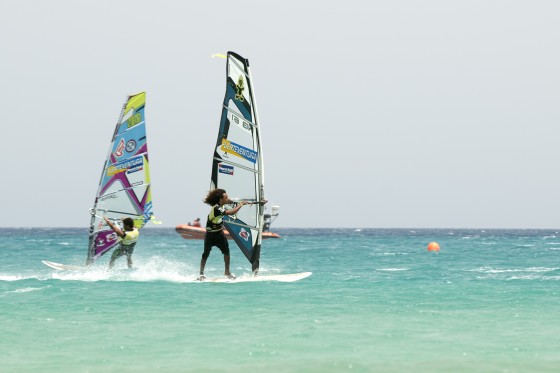 The first surprise of today was a very strong sailing Antony Ruenes, who sent Davy Scheffers back to the beach easily. Saragoza and Tonky Frans went up without any problem. Andy Chambers defeated Leo Ray and Nico Akgazciyan the young Italian Mattia Fabrizi. Mauro Lemos could beat his fellow countryman Joao Henrique Barros and Kiri Thode won against the German Adrian Beholz. Antxon Oetagui did not show up for his heat against Marteen van Ochten. We did not meet him, but someone told us, that he god injured during the warm-up. EFPT dominator Steven van Broeckhoven kicked out Dieter van der Eyken with the highest score of the second round. Although Dieter landed a sweet triple Spock it was was not enough to advance. 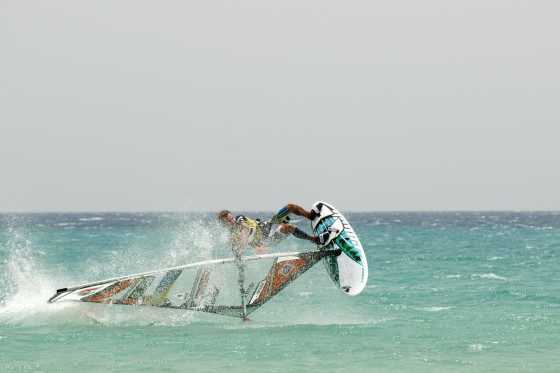 Slovenian Andraz Zan was better than Edvan Souza in extremely gusty  conditions. Eric Sanllehy had no chance against Taty Frans. Quincy Offringa was on form and kicked out Paul Zeper and Yegor Popretinsky in the following round. It was then Gollito Estredo, who stopped Quincy in the quarterfinals. 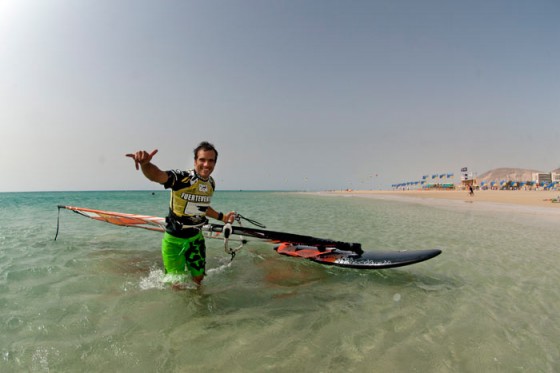 Michael Rossmeier happy about his good place in the single elimination

In the last heat of the second round the Austrian Michi Rossmeier surprised with a very strong heat against Mattia Pedrani and Gollito gave his countryman Daivis Parternina Teran no chance to advance.

Out of the top 16 Antony Ruenes surprised again, could beat Phil Soltysiak, who was 4th in Lanzarote, but got stopped by Tonky Frans, who could win by 0,5 points against Björn Saragoza. Andy Chambers was sailing stronger than Nico Akgazciyan and Kiri had no problems to win against Mouro Lemos. Steven had an incredible heat against Maarten van Ochten. Also Taty was unbeatable for Anraz Zan. Gollito and Quincy made it up in the top 8, Rossmeier and Popretinsky not. 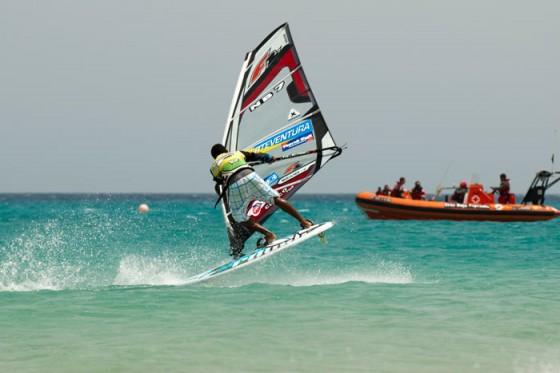 In the quarterfinals, the wind got a bit more consistent and most of the sailors were on 4,0 to 4,5 m sailsizes, Tonky was too strong for Antony. Andy Chambers lost against the firework of moves of Kiri Thode. Taty was absolutely on fire against Steven van Broeckhoven and Gollito had enough tricks with high difficulty to beat an extremely strong sailing Quincy Offringa.

The semifinal just saw riders from the Carribean, from El Yaque and Bonaire: Tonky against Kiri and Taty against Gollito. Kiri fought Tonky down, who crashed several moves. Taty gave Gollito a hard time, but it was the worldchampion, who made it in the end. 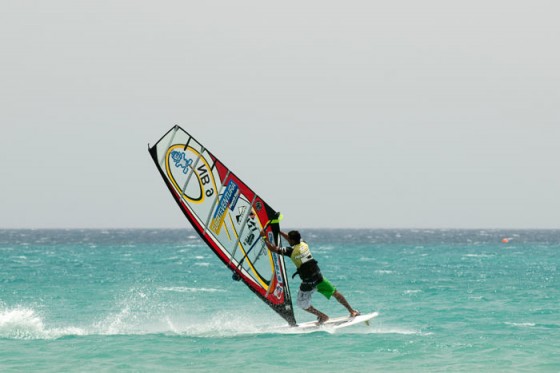 The b-final in between Tonky and Taty had relatively bad windconditions, but Tonky made it on the podium.

Kiri Thode and Gollito Estredo  had good conditios. Gollito had the better variety and more difficulty, a perfect Skopu at the beginning and a perfect Gozzada Burner and could win the single elimination. Congratulations! 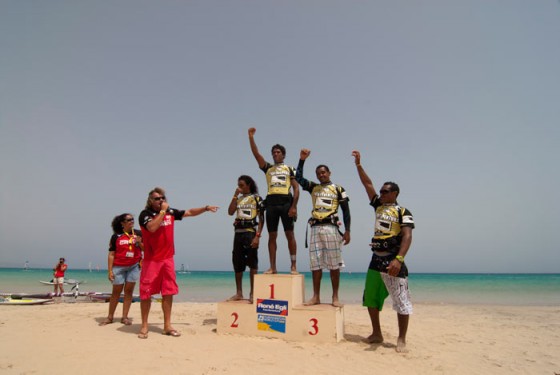