Yesterday was the first day of competition at the Fuerteventura Wave Classic 2010 at a spot named “La Caleta”, which is situated east of Majanicho. The wind picked up during the morning and around midday the first heat got started. 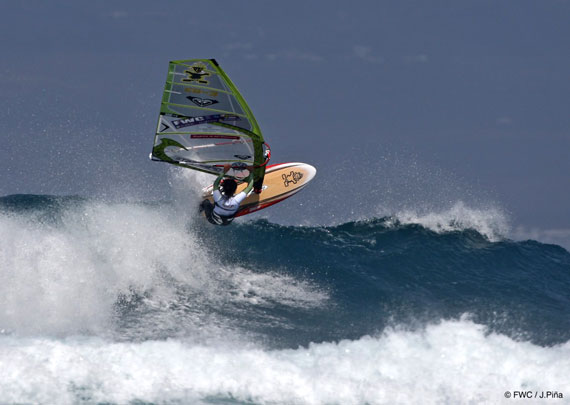 Iballa Moreno at the moment in the leading team

During the whole day the wind blew quite off-shore with 13 to 20 knots, with good sets of 2m waves. The riders had prepared their bigger boards and sailsizes from 4.5 to 5.3m². The heat duration was 25 minutes to give everybody enough time to express their talents and two surfs were judged. Heat 1 was judged by heat 3, heat 2 by heat 4 and so on.

The team consisting of Iballa Moreno, Albert Mandrillo, Alex Mussolini, Jules Denel and Patrick Vigouroux got the  highest scores and is now leading the competition. 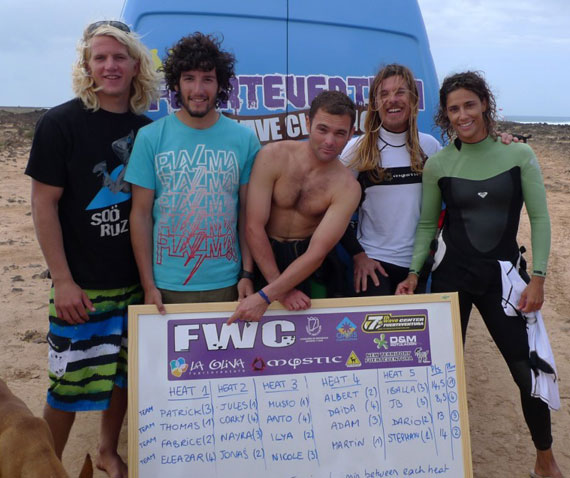 The girls, first time invited to this event, could impress a lot. Nicole Boronat for example took some of the best waves in her heat and finished 3rd with as many points as her male team colleague on the second place, and Iballa went 3rd ex aequo!

Like usual, Thomas Traversa was very good in these light wind conditions, with radical aerials, that lead him to win his heat. Jules Denel sailed as well very well during the contest and landed some big aerials and took some nice waves.  We have seen also nice moves from Dario, Martin, Albert, Stephan, JB and Fabrice. Jonas Ceballos, always eager to push the limits was rocking the waves but sometimes the end was unlucky. Alex Mussolibi showed up with some of his sick moves, scoring to the maximum.

medea2011-02-07T18:47:49+01:00March 6th, 2010|
Subscribe
0 Comments
Inline Feedbacks
View all comments
This website is using Google Analytics. Please click here if you want to opt-out. Click here to opt-out.
0
0
Would love your thoughts, please comment.x
()
x
| Reply
We use cookies to ensure that we give you the best experience on our website. If you continue to use this site we will assume that you are happy with it.OkNoRead more