Four Dimensions Movie – The “Making of” 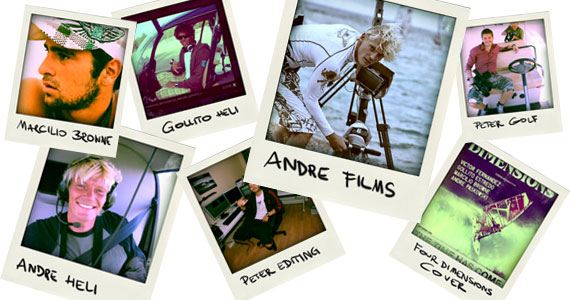 We hooked up with Andre Paskowski and asked him about details on the movie production “Four Dimensions”. If you are interested in more background knowledge about the exciting windsurfing masterpiece you should read the following interview.

C7: How many people were working on Four Dimensions?

Andre P.: Quite a few actually!!  Of course, Peter Svensson. He was the main guy behind all. He developed the idea together with myself. He filmed, edited, did all the special effects and also helped on the PR.
Then Sebastian Dörr. He helped filming on the Canary Islands and did all the extras. Sebastian also helped to transform all the files to NTSC. Barne Peters, who filmed for us on Cabo Verde.
Björn, who did the poster design, the cover, backcover, etc.
Marcilio Browne, Gollito Estredo and Victor Fernandez, who all sailed on top level and delivered the action. Without them we would not reach this great result.
Cleison, who helped filming in Brasil.
Myself: I was sailing, filming, responsible for PR, sales and financials

C7: Who else was involved in the prodcution?

Andre P.: Many people!  The persons behind our supporters of course!!! Also people inside the Music Industry, my parents, JC and Niels Patrick Geisselbrecht as photographers, many people behind print and online magazines. Such a big project needs a lot of supporting help.

C7: How many videocameras did you use? Which models?

Andre P.: Ha… nice question. I read rumours that we had used 30 cams. No, we had 4 cams plus 1 mastmount. All 4 cams were Canon HD models. 2 smaller cams for water and 2 bigger cams for land.

C7: Which quality did you film?

Andre P.: HD. But the movie is in SD. We needed bigger picture informations to be able to move around inside the frame. Some of the effects are based on this principle.

C7: How many tapes did you film?

Andre P.: I made the accounting yesterday and we used 90 HD Tapes. Each is 60 min long.

C7: How many moves did you get?

Andre P.: Endless. So many. Jumps, rides, helishots, freestyle, water, underwater, crane, track. Just endless moves. I think if we would put all after each other you could watch 3 days non stop windsurfing moves.

C7: Which additional equipment did you use?

C7: How many helicopters?

Andre P.: We had a bit over 10 hours filming from the heli. Once we went with 2 in the same time.

C7: How many days did you film for “4 Dimensions”?

C7: At which locations did you film?

C7: Who did the filming?

C7: Were there any unforeseen occurrences or problems during filming?

Andre P.: Of course! We lost one waterhousing in Pozo. We had a crazy heli pilot and almost hit Victor. We got stopped by the police in Egypt. We went with a helicopter on Maui and right over Hookipa it started raining. We had 3 weeks no conditions in Pozo. If it would always go too easy then it would not be a challenge.

C7: Did you work with a screen-play?

Andre P.: Yes. With tracks and cranes you need to work out exactly what, where and how you are going to film! You can not just readjust everything.

C7: Who did the editing of the video?

Andre P.: Peter is the main guy here. He got some help from Sebastian Dörr. Sebastian then was responsible for all extras.

C7: Which editing software did you use?

C7: How many hours/days did you work on the editing?

Andre P.: A lot. All the time between the filming sessions and then from July till September. But not just a bit. Peter was looked in his kitchen (his office is based there) for sometimes more then 20 hours a day.

C7: How many hours of rendering the special effects?

Andre P.: I am happy, that we have brought the project to an end,  but I feel also a little bit sad. It was a great time to work with such a creative and motivated team. We had a vision and we did it. I see this video not as a promotion or anything like that. I believe it is the perfect product to show the world what windsurfing is about: the coolest sport ever.

You can order the Four Dimensions DVD here in our shop.