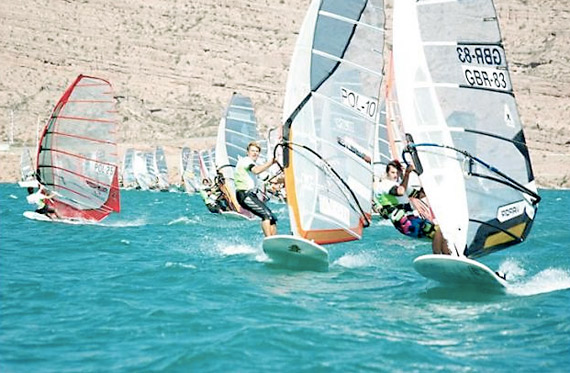 Lined up at the start (Pic: Gabriel Palmioli).

Formula Racing on a lake at 1500 m above sea level must be a hard deal! But not for the worldbest athletes. And the dominating sailor in Racing for many years now, Antoine Albeau, seems to enjoy to compete on the Lake Potrerillos in the Andes and to win. After the third day, three more races for the men were held, he extended his lead! 17 points are in between him and Ross Williams, who could defend his second position on day 3! Casper Bouman from the Nederlands had a phenomenal day and could win race 8 & 9 and follows right now Antoine and Ross in third position. Paulo dos Reis is in the 4th position with equal points like Casper. Pawel Hlavaty in 5th and Steve Allen in 6th position lost some ground on day 3.

In the ladies category Marta Hlavaty dominates the competition as well and leads with the minimum amount of 7 points. Morene Demont from Martinique island had another strong day and could win her second race in this Formula World Championships and follows Marta in second position! US sailor Farrah Hall is in third, already 13 points behind Marta.

Check the results after 9 rounds. 6 more rounds can be sailed in the following three competition days. 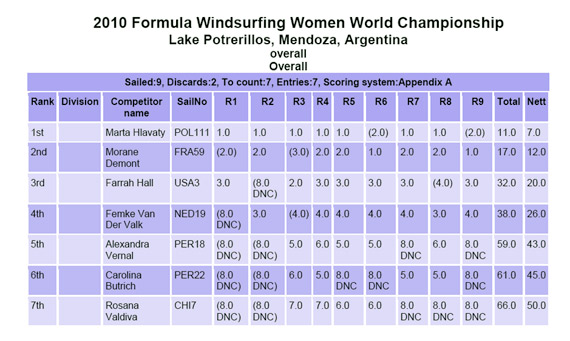 The ladies result after the third day at Lago Potrerillos (Source: formulawindsurfing.org). 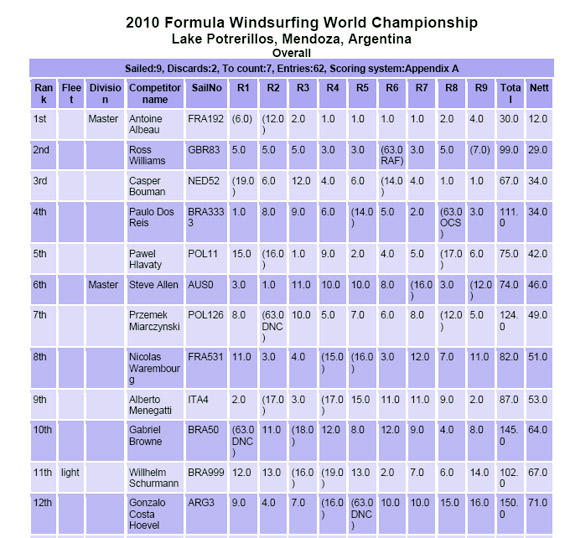 Here is the official update of Ceri Williams, the Class president of Formula Windsurfing, about day 3:

Huge crowds of spectators turned up at the lake to watch day 3 action! The governor of Mendoza must have declared a national holiday judging by the number of spectators that arrived at the event site to watch the days action !  Cars lined the roads surrounding the lake and every vantage point attracted a group of spectators. There was a festival atmosphere around the event site – and to round off the days festivities a Miss Bikini contest .
Todays “star” rider was Casper Bouman (NED52) with a 4th in race seven and 2 bullets in races eight & nine. Championship leader Antoine Albeau (FRA192) still holds an impressive lead after another consistant days racing, but Paulo Dos Reis (BRA3333) will be regretting his OCS in race 8, slipping down the overall  ranking  by one place and making way for Casper to move into 3rd.
“You get the feeling the podium places are all still in the balance.”
In the womens fleet Marta Hlavaty (POL111) did not have it all her own way, in the lighter winds Morane Demont (FRA59) is a more than her equal, and surely is a star of the future.