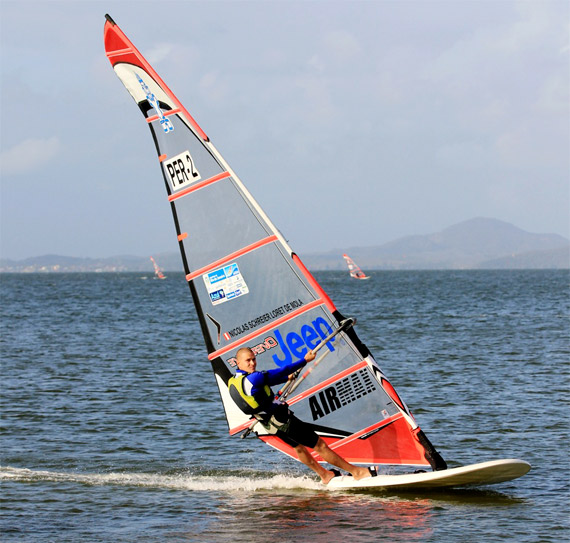 The Rio Worlds Formula Festival was a great windsurfing week at Araruama lake, 90 km northeast from Rio de Janeiro. The event started with the Brazilian FE (Formula Experience) National Championships with almost 60 racers flying on the course in winds from 12 to 20 knots. Formula Experience is a one board Formula class and an official sanctioned ISAF sailing class, which is extremely popular in Brazil, Chile and Peru. It allows each sailor 2 sails with a maximum size of 11,0 m, for under 17 8,5 m and for under 15 7,5 m.

The local sailor Leonardo Rebello finished in 1st place, followed by Marcello Morrone and Fernando Bocciarelli. The Brazilian championship was an warm up for the World Championship and the things became really hot during the week with gusts of 32 knots blowing from north east! 15 races completed and a very well disputed event took place in Araruama. Nicolas Schreier from Peru and local Leonardo Rebello were knit close in the score sheet until the last day of competition for the Open title. In all other divisions the sailors changed positions all the time in an exciting championship indeed. In the end, Nicolas took his 3rd World Title in a row, followed by Leonardo Rebello and Fernando Bocciarelli from Brazil. All the sailors were invited to a Brazilian barbecue feast in the prize giving ceremony.

At the party the organizers raffled a full Formula Experience package! The World Champion Nicolas Schreier took home not only the 1st place prize but also a Severne Blue Line mast! His team mates Carolina Butrich and Sebastian Aguirre were lucky too to get a Severne Alu Race boom and a Severne Overdrive sail. Christina Matoso from Brazil won a Severne HD Extension and nothing less than a Starboard Formula Experience board was raffled to Bruna Martinelli, who was racing with a borrowed board. Very fair! In the FE fleet we had sailors from Under 15 to Grand Master divisions, not forgetting the women fleet who managed the equipment with no problems under sometimes extreme situations.

The Peruan version of the event report (by Igor Aguirre):

With the last race of the FE Worlds over, Sebastian Aguirre and Nicolas Schreier earned their third FE World Championship in their divisions. Nicolas was alternating positions with Leonardo Rebello from Brazil up until the last race. Sebastian Aguirre was also having a tight race with Youth sailors until the last day, where he scored an incredible 1,2,2,2 in the Open, which assured him the Youth division (under 20) title and pushed him to 5th place in the Open division.
Nicolas Schreier won the OPEN division and the ISAF FE World Champion. Just last year, in Spain 2009 Sebastian had won the ISAF FE World Champion Title while Nicolas got 1st in the Senior division. In 2008 Sebastian won the U15 division while Nicolas won the Senior division at the FE Worlds in Peru: 3 excellent results in 3 years for these great sailors from Peru.
Just a month earlier, in August 2010, at the FE South American event in Paracas, Peru, they finished 1st and 2nd in the Open division while Sebastian also scored 1st in the Youth division.
The FE Worlds event was held at Upwind Club in Araruama, Brazil. The facilities were excellent and the site was a real wind machine with some days having gusts over 30 knots.

Links about the Formula Experience Class:

Here are the results in the different divisions at the FE World Championships 2010: