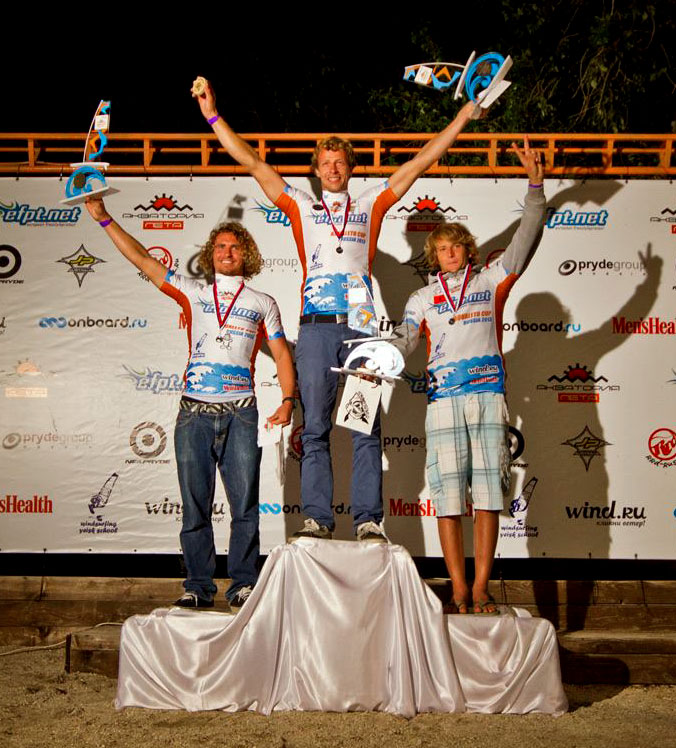 A lot of praying for wind, some hard work for the riders and a completed single and double elimination were the achievements for the final day of the event. The skippers meeting, to finish the single elimination, was scheduled for 06.30 am today to catch the potential best conditions of the day. In the morning we’ve seen some tired eyes not only because of the time but also because of he strong storm that hit Eysk overnight. With 40 knots of wind and thunderstorms many riders and crew members couldn’t sleep so well, for a moment everybody was worried that it would be unsailable in the morning. However, almost exactly as the clock hit six in the morning the wind dropped and so did our hopes to finish both the single and the double elimination on our last day here in Russia. After postponing for a while, waiting for the wind to settle, adjusting the heat area, altering the heat duration (10 minutes) and the judging format (best move) to fit better with the rather light wind conditions, we were ready to go at 3.00pm in the afternoon.

In the single elimination we saw a strong sailing Max Rowe (North/Fanatic) from the UK showing how much his style and skills improved over the winter, taking out Adam Gavriel (Sailloft) from Israel. In the same heat Steven Van Broeckhoven (JP/Neilpryde) defeated Julien Mas (Sailloft) from France showing some big power moves, even in the underpowered conditions. Van Broeckhoven then took out Rowe and sent him to the losers final, whilst in the same heat Adrian Beholz (Sailloft/Fanatic) got beaten by Dieter Van der Eyken (Starboard/Severne). Our top four after the first single were as follows: 1st Steven Van Broeckhoven, 2nd Dieter Van der Eyken, 3rd Adrian Beholz and 4th Max Rowe.

Head judge Tom Hartmann scheduled a one heat break and straightaway started off the double elimination. Whilst several riders were complaining about marginal conditions many showed their professionalism choosing the biggest equipment they had to pump themselves into some powerful moves.

Well worth mentioning today are especially two guys who had a great comeback after a rather disappointing result in the single. First of all Rick Jendrusch (F2/Severne) from the Netherlands who got taken out in his first heat in the single by Phil Soltysiak (Starboard) to then fight back in the double. He sailed four heats, to only be stopped by an impressive sailing Adam Gavriel who ended up 7th! On the other side we saw our only Canadian competitor Phil Soltysiak battling himself all the way up in the double elimination after being defeated by Adrian Beholz in their second re-sail yesterday. Soltysiak battled his way through five heats taking out Vladimir Yakovlev (JP/Neilpryde) from Russia, Yarden Meir (Fanatic) and fellow Isralian Adam Gavriel, as well as Max Rowe and Adrian Beholz. His run was eventually stopped by Dieter Van der Eyken one heat before the final. The Canadian obviously was on a mission and pumped himself into his moves, showing style, technical skills and a lot of diversity.

In the final we saw again a very experienced Van Broeckhoven pumping himself into culos, burners, ponchs, several sliding moves and big shakas. Due to the light wind we didn’t see many move combinations, yet the high level in the final was obvious. With such light winds many of the riders watching from the beach were left amazed as Steven made his way through these moves. The final was a worthy end to such a great competition and we were stoked to be hosted by such a great organising team here at the Auqaleto Hotel in Eysk.