The EFPT, the European Freestyle Pro Tour, which is a great tour for young newcomers or local heros, who want to prove their skills, presents their 2011 tourplan now. Overall there are 7 events on the list, two Tow-in only competitions and 5 regular Freestyle Windsurfing events with an overall pricemoney of 56.000 €.

The EFPT announced: “In its 9th year the EFPT combines proved spots with two newcomers and raises the show factor of the sport of freestyle windsurfing.” 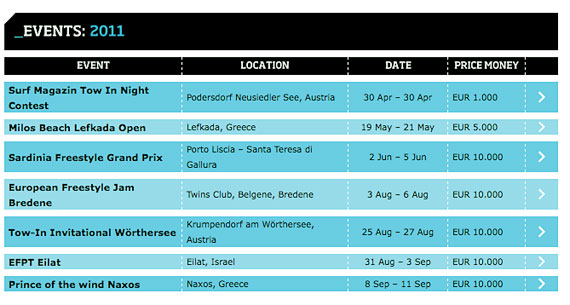 So let´s have a detailed view on the this years tourplan of the EFPT. There are a few new developments compared to 2010: two pure Tow-in competitions should take place in Austria, plus Bredene/Belgium will see a comeback. Eilat the freestylemecca of Israel will see the first international freestyle windsurfing event. There are no overlappings with the PWA freestyle tourplan so far. So we can expect big names at the events fighting for the overall pricemoney of 56.000 €.

The tour 2011 kicks off with a Night Tow-in Show-event sponsored by the German SURF magazine taking place on the first weekend of Poderdorf´s famous Surf Worldcup on the 30th of April. 14 of the world best riders and 2 wild card heros will be invited to perform their spectacular moves during a night session on the shallow Lake Neusiedl.

Leaving Austria, the EFPT will stop at the windy Ionic Island of Lefkada, Greece in the mid of May and Sardinia, Italy by the beginning of June. Both events are well known for their perfect sailing conditions and could deliver outstanding freestyle windsurfing eliminations over the last years.

Back to mainland Europe, Bredene in Belgium will have a comeback on the EFPT at the beginning of August, and there will be the 2nd Tow-in show event on the Wörthersee, Austria a few weeks later. At the end of August the tour will be off to new waters: Eilat, the mecca of Freestyle windsurfing in Israel, will give its debut on the tour.

After 4 regular and 2 tow in show events the European Freestyle Pro Tour Champion will get crowned at the 5th and last regular event of 2011 on the Naxos, Cyclades, Greece in September.

Compared to the 2010 tour the event in Podersdorf will be an PWA only freestyle event and the EFPT has three more events on the tourplan and 6000 € more pricemoney overall.

Hi Sjoerd,
the tow in contest will be a show event only and like mentioned the top 14 riders will get the chance to compete plus 2 wildcard riders. This tow in night session will happen while the PWA freestyleevent in Podersdorf. So most of the participants will be on location anyway and the best of them will win some extra money.
Chris

Apart from the idea in general being a bit tacky, does the organisation really think loads of riders will show up for just ONE night of competing for a crappy 1000eu pricemoney all the way in Austria?
I guess that will be a local austrian ‘pro tour stop’…

quite everybody goes to the homespot for windsurfing by car or is flying around the world , so we don`t do a green sport !!! perhaps its not a good idea to start a competition for everybody , but to make our sport more popular it is better watching big action of the best riders than no action, if there is no wind.