The third single elimination could be finished with a new face on top of the podium. Davy Scheffers (H-311) from Holland could beat his friend and unbeaten EFPT winner Steven van Broeckhoven. 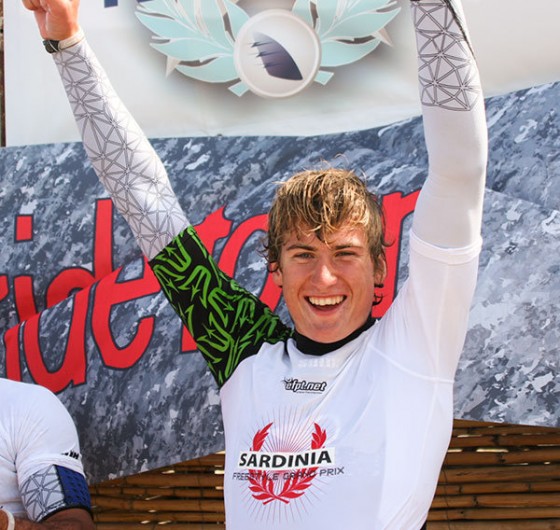 The morning of the third day of the Sardinia Freestyle Grand Prix saw a few postponements on the noticeboard. This gave the riders the chance to relax after the last exhausting days at Porto Liscia, Sardinia. Finally after lunch the wind kicked in and the third single elimination got started at 2pm.

Compared to yesterdays heavy wind, today Porto Liscia offered the riders perfect freestyle conditions. Sailsizes around 4,7sqm, rather flat water and sunshine were the grassroots for moves like Skopu, Switch Kono to Puneta, Kabikuchi, a normal stance Kono to Puneta.

The semi final, heat Nr. 15, saw Nicolas Akgazciyan (Starboard/Gun Sails) against Edvan Souza de Pedro (RRD/Simmer Style), and Davy Scheffers (Tabou/Gaastra) was up against Steven van Broeckhoven (F2/Gaastra). Nicolas showed a very fluent and stylish heat, and therefore succeeded over Edvan. Davy could pressurise Steven already in the last two days, but in the end Steven always was victorious over his close friend. Not today.

Davy was super motivated after he kicked out French rider Antony Ruenes (Tabou/Vandal Sails). This success left him very self confident for the upcoming heat against Nicolas. The young Dutch rider took a lot of risk and could win, for the very first time, a single elimination on the European Freestyle Pro Tour.

After losing the semifinal Steven was on fire in the losers final. Judges and audience saw a great variety of moves, underneath them a burner, switch and normal stance Konos, and the Kabikuchi. No one before nailed this move in a competition. Also Edvan performed really well today, sailing focused yet with a lot of passion, but had no chance against Steven. 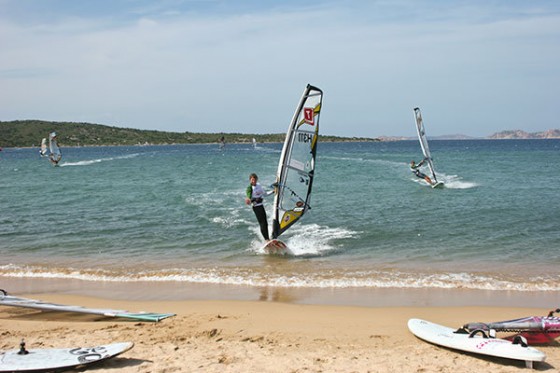 Davy Scheffers coming back to the beach - Pic: EFPT

The single elimination was finished at 04.45pm, so the race crew decided to start the double elimination. As the weather forecast for tomorrow predicts wind again, the goal was to go until heat Nr. 27. This leaves 8 or 9, if we need a superfinal, heats for tomorrow. Still on the list for the victory in the third double elimination are: Meir, Zan, Fabrizi, Promponas, Ruenes, da Silva, Bestetti, Bosson, de Pedro, van Broeckhoven, Akgazciyan and Scheffers.

Finishing the third double elimination opens a discard elimination for every rider. That means their worst result will not count for the overall result of the event. The Sardinia Freestyle Grand Prix remains exciting. Tomorrow is the last day of the event at Porto Liscia.

Also, the last days have taken its toll on some riders. Feets are bleeding, muscles are tired and we also had to bring one rider to the ambulance. Chico Bento, who was sailing very strong in yesterdays´s double elimination, got injured already a few days before the event, but decided to compete. Today, in his heat against van Broeckhoven, he finally had to give up, due too much pain coming from an impaired rib. The latest knows we have say that he is up on his feet again, but will most probably not take part in the competition tomorrow. All the best from our side, Chico!

For tomorrow the skippers meeting is again set for 9.00am. 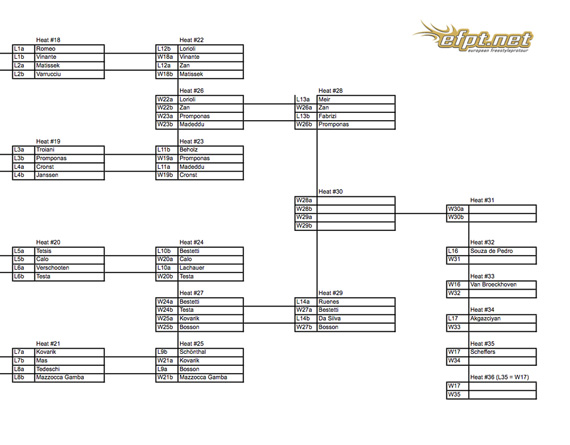 Third Double Elimination not finished yet

i think an event with three finished double eliminations should count more heavily in the final rankings than an event which is decided on just one single elimination in light winds because the wind was so low on a certain event.