The Milos Beach Lefkada Vassiliki Festival is over. As there were no further heats sailed on the second spot of the event, the party started with the result of the first double elimination from Vassiliki.

On the 4th day of the event sailors came together for the skippers meeting at 1.00 pm, as suddenly a few gusts hit the Milos Beach Club. Some sailors used the chance and performed with their big equipment, 5.6 m sails and boards around 110 liters. They could land freestyle moves near the rocky beach of north Lefkada. The race crew immediately put up the 15 minutes warm up flags, but the wind did not last long enough to start the first heat. 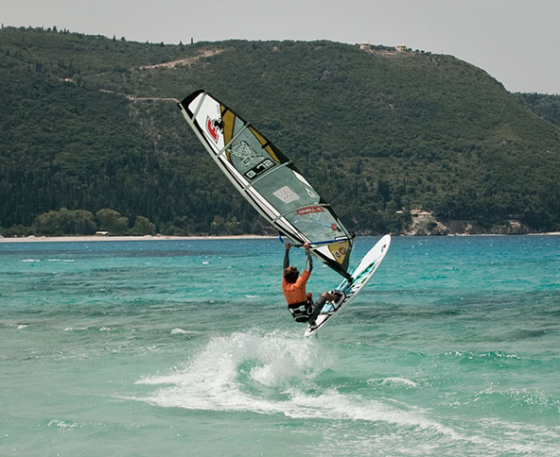 All riders had to stay on standby until 6.00 pm, but no one really thought the wind would come back. So the majority of riders left the beach for a soccer game in a near cage. It might not have been the equivalent level to the action the boys can show on the water, but Nicolas Akgazciyan (Starboard/Gun Sails) from France and Edvan Souza de Pedro (RRD/Simmer Style) from Brazil made a good performance on the court. 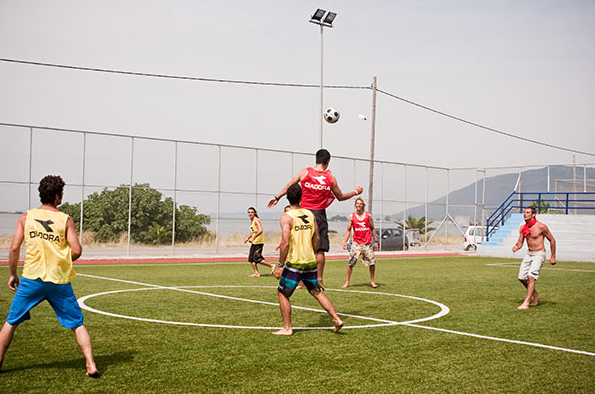 The price giving ceremony was held right in front of the Milos Beach Club, where co-organisers Christos Stratos from the north and Simon Morgan from the south of Lefkada welcomed the major of the island. After the cameras for the live-stream were ready for the last time of the event, the top 16 riders received price money plus the top 4 Yarden Meir (Fanatic/Simmer Style), Nicolas Akgazciyan (Starboard/Gunsails), Edvan Souza de Pedro (RRD/Simmer Style) and Steven van Broeckhoven (F2/Gaastra) got cups and medals. After the last photos were taken the Milos Beach Club invited all riders to a delicious buffet and sent everybody free to party. The event was a succesful concept: having competitions on two differents spots on the same island. That was a quite cool idea! 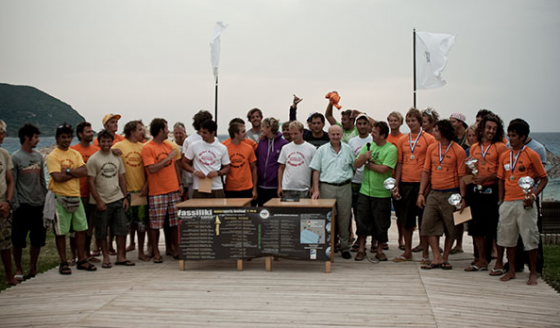 All participants including the winner (Pic: efpt.net). 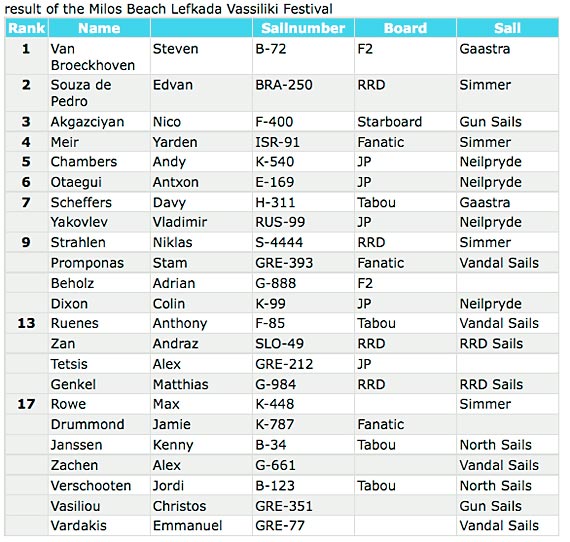 In the overall tourranking Steven van Broeckhoven leads with 640 points in front of Nicolos Akgazciyan, who has 445 points. In third position follows Davy Scheffers with 315 poits. So far 4 events were held and the best three results will count in the end. Now a break while the summer months will follow and from the 16th till the 19th of September the big final will be held on the island of Naxos. Nicolas Akgazciyan has a little chance to win the title, but it looks like Steven should take the victory again. Davy Scheffers is also in asafe 3rd position right now, but the fight for place number 4 in the endranking will be a hard one. 10 riders are within 77 points.