Andy Chambers was the barbecue chief yesterday evening and he made it today from the last place in the single until the 5th place in the double elimination. Vassiliki was delivering perfect thermal winds again for the EFPT fleet, lasting exactly as long as the elimination needed. 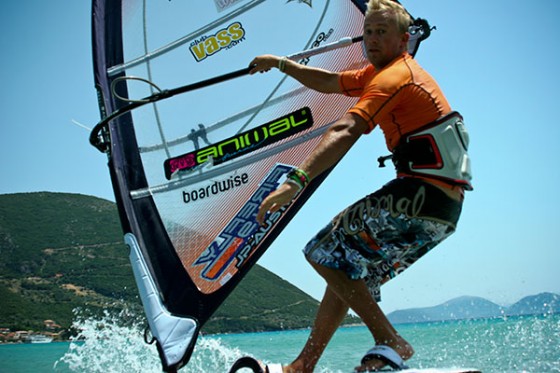 Thermal winds never come before 2pm. Therefore the EFPT riders could spend a few more hours in their beds. At 1pm everybody attended the skippers getting ready for the double elimination. Andy “Bubble“ Chambers lost in yesterday´s single elimination in the first heat against his British mate, and maybe the most hilarious speaker around, Colin Dixon. So for today “Bubble” was up to correct this mistake. The naked chef sailed very stylish and fluently throughout his heats. He could win over Max Rowe in the first round. In a very tight heat – both riders had big moves like no handed Flakas and Shove-it into Spock – Andy finished his heat not crashing even once. Therefore he could pass in the second round.

Heat nr. 32 showed Yarden Meir on the opponent list. Chambers batteries were nearly empty after 6 heats. The Israeli won and succeeded into the next heat where he sailed against Brazilian Edvan Souza de Pedro. Colin Dixon announced Edvan as the king of the dancefloor from yesterdays party, and the always smiling South American proved he can also perform like a freestyle king on the water. Yesterdays finalist Nicolas Akgazciyan got eliminated by de Pedro and ended up on third place. 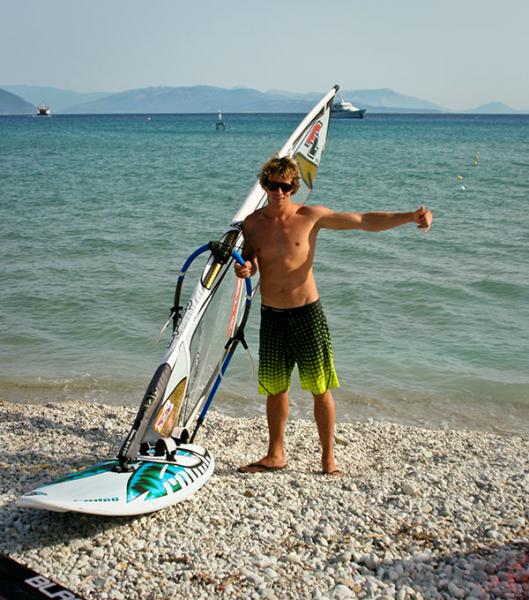 After 34 heats only two riders remained in the double elimination ladder. Edvan Souza de Pedro and permanent winner Steven van Broeckhoven . During the 8 minutes pause from the prior heat to the final a few strong gusts forced a lot of amateur riders to call the rescue boat. Steven and Edvan had, as yesterday Steven and Nico, again a difficult decision which sails they should choose.

The powerful Belgian van Broeckhoven rigged a bigger sail than Edvan, who gambled, and took 4.5sqm. The heat was dictated by the wind. Steven managed to stay in the upper, more windy part of the heat area, while Edvan had to pump really hard to get his moves done closer to the beach.

“Some might say now that it is boring to see, or read, Steven van Broeckhoven is winning again. We have to respond that we don´t get tired of Steven´s explosive style,” the EFPT crew stated.

More pictures you can check out here on the EFPT site.

Results after the first double elimination at Vassiliki:

Today the whole event moves to the second spot. Located in the north of the island, Milos Beach will be the playground on the third and fourth day of the event.

chris2010-06-26T00:47:37+02:00June 13th, 2010|
Subscribe
0 Comments
Inline Feedbacks
View all comments
This website is using Google Analytics. Please click here if you want to opt-out. Click here to opt-out.
0
0
Would love your thoughts, please comment.x
()
x
| Reply
We use cookies to ensure that we give you the best experience on our website. If you continue to use this site we will assume that you are happy with it.OkNoRead more