On the final day of the “EFPT Milos Beach Lefkada Freestyle Open” the wind hit the beach earlier than the last days. “If you can´t see the mainland, there will be wind for sure“, “Zakel” alias Christos Tsitsimelis raised the hopes of the 21 EFPT riders on the last day of the event. The wind was up, but dropped just before the finals and put four windsurfers on first place. Mattia Fabrizi, Adam Gavriel, Gabriele Varrucciu and Niklas Strahlen won the Milos Beach Lefkada Freestyle Open 2011. They shared podium, price money, overall ranking points and applause equally. 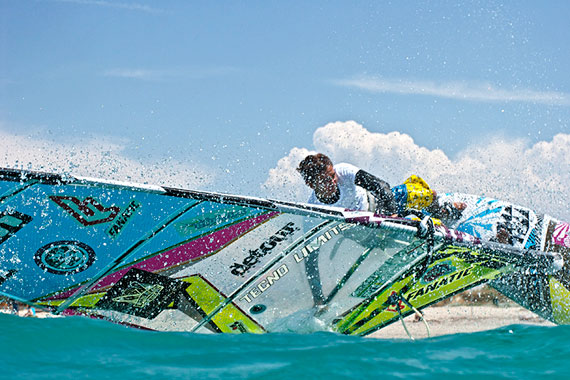 A more detailed report by the EFPT

Heat #9 was the first of the second round of elimination. Those who made it through the first round should now face top seeded riders such as Yegor Popretinskiy and Max Rowe. Tilo Eber entered the heat area from the mid left and sailed the smallest sail in this heat, but sent Britains Jamie Drummond home with a 3-0 decision from the judges. That was some serious sailing from the German. The other pairing of this heat was Gabriele Varrucciu against Max Rowe. „Varrucciu just has a great style,“ stated Adrian Beholz appreciative. The tall Italian with the punk haircut passed over Britain´s top rider. Heat #10 was the best of the day. Adam Gavriel challenged Yegor Popretinskiy. Both were sailing good. Popretinskiy brought a good repertoire of sliding moves. A Meev in the very first seconds of the heat showed the technical skills of the Russian. Gavriel responded with a Shaka, Flaka combinations and a bold Front Loop, amongst other moves. Popretinskiy struggled to stay in the heat area in the dying seconds of the heat. Judges did not score his last tricks as they were out of the heat area. Gavriel´s committed performance and a smart strategy earned him a 3-0 victory over the top seeded rider in this elimination. Danilo Menez da Silva had no game against local Stam Promponas . The Greek advanced into round 3. As the green flag for the following heat went up Yegor Popretinskiy asked for insight in the judging sheets because Gavriel´s victory left him doubting. A short, stormy debate found an end as Popretinskiy agreed to the fact that judging decisions are factual decisions. In the meantime heat #11 was on its way. Erik Hakman vs. Adrian Beholz and Niklas Strahlen vs. Stefano Lorioli. Only one of the boys from the north remained cool. „Today I learned that the most important thing is to stay calm. You can not force the moves“, stated Hakman wise. Beholz had more pop, was safer in his moves and went into the next round. Milos Beach´s conditions suit Niklas Strahlen. Stefano Lorioli had to give in to a truly sublime performance. The last heat of round 2 saw Edvan Souza de Pedro against youngster Jacopo Testa and Mattia Fabrizi against Alex Tetsis. Italy´s number one freestyler has a riding style that gets him attention from camera lenses and scores big points on judging sheets. Fabrizi passed over Tetsis. Edvan Souza de Pedro sent home Jacopo Testa. Although Testa was, as Hakman, brought back down to earth in this round of elimination, both had a smile on their faces. Today these two fresh faces made a great experience in their young careers. At the beginning of round three the wind started to go down. Heats were a wind lottery. The conditions asked for a smart strategy and the right sail size. Tilo Eber was the first who had to give in because of a wrong choice of equipment. The German let Gabriele Varrucciu pass in the next round without strenuous opposition. It was the same game for Beholz against Strahlen in the next heat. Adam Gavriel and Mattia Fabrizi impressed, once again, with both solid and fresh performances. Judges wrote a lot of plus signs behind the moves of Israeli Adam Gavriel. He and the other top 4 sailors Varrucciu, Fabrizi and Strahlen were beyond doubt today´s best sailors. Unfortunately their performances were not awarded with suitable sailing conditions. The wind dropped to almost nothing only seconds after the horn initiated the start of heat #15. It was canceled. Although race direction, riders and audience were all set to restart the heat, conditions did not allow it. Finally at 7pm race director Tom Hartmann and event organiser Christos Stratos called it a day and invited riders and audience to the price giving ceremony at the Milos Beach Resort. Mattia Fabrizi, Adam Gavriel, Gabriele Varrucciu and Niklas Strahlen won the Milos Beach Lefkada Freestyle Open 2011. They shared podium, price money, overall ranking points and applause equally.

words are not enough show us some videos