Tonky Frans wins the EFPT Surfworldcup in Austria. In howling southerly winds Tonky, the 35 year old freestyle legend managed to hold off 20 year old French freestyle hotshot Sam Esteve, who made it all the way to the final by winning against Steven van Broeckhoven, Riccardo Marca and Giovanni Passani. He then took down Tonky in the final of the double elimination and forced a super final. They had to sail again but Tonky Frans, who started his international freestyle career in 2001, proved that he was still on top of the game. The highest scoring heat of the day (46.92 points) sealed the deal for the Bonairean windsurfer.

“It feels so good to win an event after such a long time without victories!” (Tonky Frans)

April 30th was a big day at Lake Neusiedl in Austria. These days with consistent wind from southern direction are rare. The forecast predicted excellent wind for the early afternoon and the wind appeared as forecasted, 20 – 25 knots with gusts up to 30 knots. The riders were on their 4.4m and not only sailed against their opponents, but also tried everything to land the moves in the rough brown waters. The remaining 16 riders of the double elimination fought in 12 heats for the event victory.

With eight minutes heats and three moves counting each tack (later in men on men heats 4 moves counting on each tack), we saw some incredible performances and close calls. A few riders managed to come back through the double elimination. Julien Wiemar made it from the end of the ranking up to the 7th place overall. Swiss Loick Spicher managed to defeat the Italian Mattia Fabrizi and made it in excellent 6th place.

Steven van Broeckhoven won three heats in a row. He took down Bavarian ripper Andi Lachauer, German Julian Wiemar, who struggled with pain in his neck throughout the whole week and Swiss Loick Spicher, who was sailing great. Steven did his best but isn’t 100% fit after his ankle surgery last autumn. But we bet we will see him on the podium soon again.

Frenchman Sam Esteve stopped the run of Steven in an extremely tight battle. 37.97 vs 37.41 points. Hanna Poschinger, EFPT press officer: “Steven seemed to be on a mission, but so was his next opponent Sam Esteve who took fourth place in the single elimination. Both riders were putting on an incredible show, with Esteve landing a perfect no handed burner, a Skopu, Kono and Culo on starboard and a Shaka 360, Kono and Culo on port tack. Van Broeckhoven could mark down a burner 360, Air Funnell into Funnell, Culo and half switch Kono on starboard and a Lollypop, Shaka Flaka, Shove-it Spock and Culo on port tack. When the horn went off to finish the heat, Esteve has been missing a move on port tack but could still win over Steven by 0,56 points.”

Sam needs wind and he got wind. He fought down Steven van Broeckhoven, the Italians Riccardo Marca and Giovanni Passani. Hanna Poschinger, EFPT press officer: “The wind had been increasing more and more during the later afternoon and the riders were stacked on their 4.4s. Conditions that would favor Esteve in the fight against Giovanni Passani. In one of the highest scoring heats of the day, the Frenchie could win over the Italian by 0.09 points only. The judges scored 44,66 and 44,57 points respectively landing stylish double power moves on both tacks.”

The southerly wind stayed strong and even picked up a bit. Everything was ready for the big final. Sam Esteve showed a strong performance during the first final and took down Tonky. The tension rose. All came down to the super final. Tonky was on fire: He landed a Skopu, a Culo, an Airkabikuchi and a Spock Culo on starboard tack. On port tack he had his highscored single moves with a  Pasko (7.41 points), a Bongka (6.68 points), a Shaka and a Ponch.

Sam Esteve managed to land 4 moves on port tack, but his score was almost 4 points lower compared to Tonky’s score. He missed out to land enough moves on starboard tack. Sam had just two moves on the score sheet, what made a huge difference in the end. 46.92 points against 28.71 points. Tonky was the clear winner of the Super final and the winner of the EFPT Surf World Cup 2018 event. 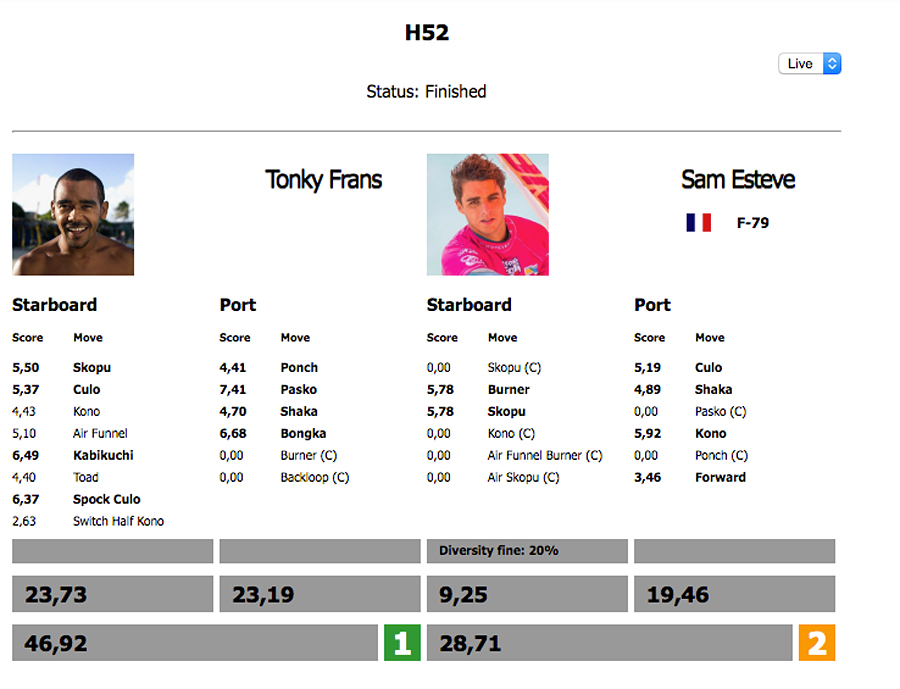 The 6 weeks of winter training in South Africa paid off and he will give everything to win the EFPT title in 2018.

Tonky not only won the windsurfing competition he is the new leader of the EFPT ranking in front of Sam Esteve. Sam is young, very talented, loves strong wind and is definitely capable to win the tour this year. It depends a bit on the wind conditions at the other events in Italy, Spain or the Netherlands. Giovanni Passani, who finished second at the last year’s final in Brouwersdam – trained hard over the winter months in Cape Town and will be a hard contender for the overall title, too.

The wind kept on blowing very hard and a super session was announced. It was a great atmosphere and a big moment to watch some of the best freestylers performing their moves in heavy chop, gusts up to 35 + knots and a lot of backwash. The conditions were extremely hard. We witnessed huge crashes but as well brilliant moves. Hundred of spectators lined up along the beach and watched the action. The big crowd braved the elements and so did the riders, camera men, judges and photographers. In the end it was Steven van Broeckhoven, who made the best out of it and won this unexpected session with a Double Culo. Unfortunately he injured his ankle during a hard landing in the backwash and needs to rest for a few days. The Italians Giovanni Passani and Riccardo Marca made it in 2nd and 3rd. The wind stayed till the evening. Once again the famous Austrian lake delivered.

On the final day of the event 8 finalist had an exciting battle for the tow-in title in Neusiedl, Lake Neusiedl, Austria. Italian Mattia Fabrizi surprised everyone with a perfectly landed double Air Burner. He was the only rider, who got 10 points from the judges.