Davy Scheffers wins the first event of the EFPT season in front of 17 year old Youp Schmit and the German Adrian Beholz. After a 13th place at the PWA event in Fuerteventura, the Dutch Scheffers was able to show how much he had improved over the last winter and dominated all eliminations. His only contender was Youp Schmit from Bonaire, who finished the PWA event on Fuerteventura in front of Davy on place 9. 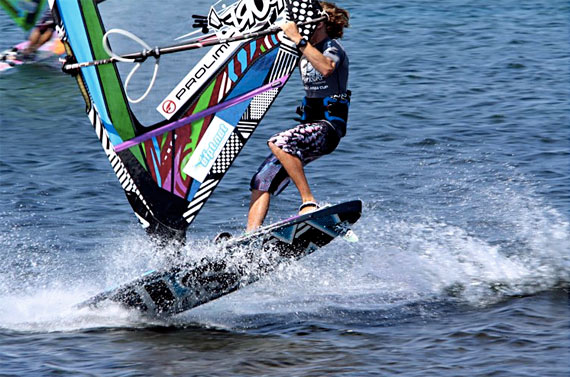 The final day at Sigri, Lesvos

Even though the forecast was not the best for the final day, the first possible start was scheduled for 9.30 am to try and finish the second double elimination. A few riders were really praying for the wind. They needed some more rounds to fight back, to make up a position or two in the overall rankings. During the day one announcement followed the next and the weather situation did not change. The organisers believed that the uncharacteristic heavy thunderstorms in the early morning were the main reason that the wind never really appeared on this sunday the 12 of August 2012.

The riders enjoyed a relaxed day at the Sigri Surf Center, while they were waiting for the last possibly start. Despite everybody seemed to be motivated to continue with the second double elimination, race director Tom Hartmann had to call it off at around four o’clock in the afternoon as he couldn’t see any improvement in the conditions. The results remained the same, with some sailors a little gutted to not have the chance to compete again. 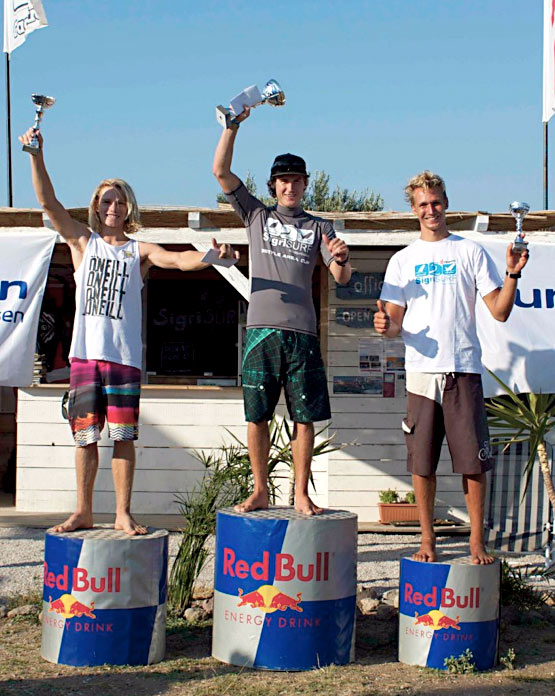 At 6 pm the prize giving ceremony began at the Sigri Surf Center. For the last time all the riders came together to find out the final results of the ‘3 Style Area Cup’. Race director Tom Hartmann announced the places and handed over the prize money. After a nice speech from Tom and the Mayor of Sigri, who declared the event as a big success, the trophies were given to the top three riders on the Red Bull podium. Fellow competitors cheered on as Adrian Beholz claimed 3rd, Youp Schmit, from Bonaire who is now riding for the Netherlands  took 2nd and in 1st place went to the Dutch rider Davy Scheffers. 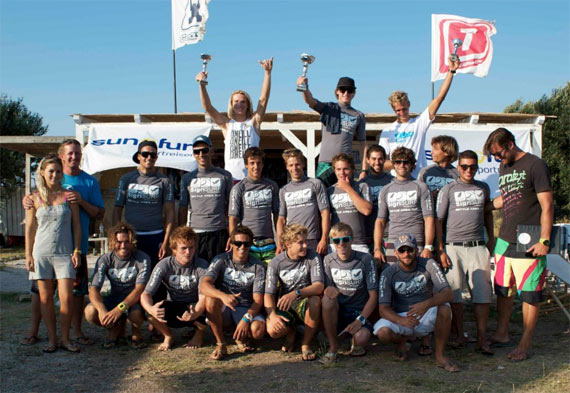 All competitors at Sigri (Source: EFPT).

The EFPT and many riders look forward to the next event in France, which will take place at Six Fours Les Plage from the 27th until 31st of October 2012. 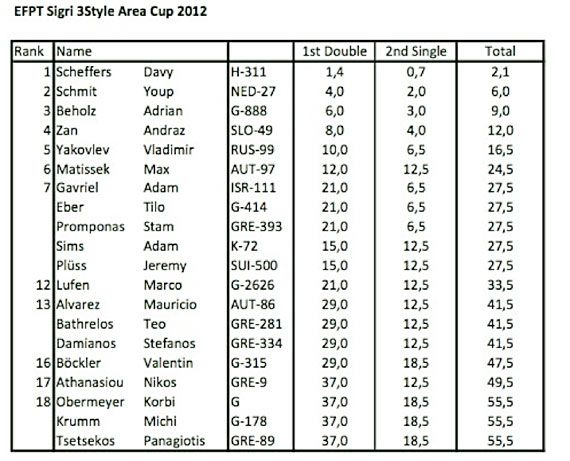 […] Day 3 at the 3 Style Area Cup unfortunately didn’t deliver sufficient wind for a competition, but the organisers and the EFPT can still look back to a very successful tour stop with one full double elimination and a single elimination finished. The village of Sigri on Lesvos hosted 20 international riders from seven different countries. Almost 40 heats wer completed during the two days of competition. The wind had medium strength and the competitors used sails in between 4.5 and 5.2 m. In the end Davy convinced most and took the victory! Watch the final video, which sums… Read more »