The first start of this tenth edition of the Defi Wind has been given today in exceptional windy conditions. At 15:25, under a 20 to 25 knots tramontane (local North West wind) 1000 competitors have crossed the starting line of the first round. 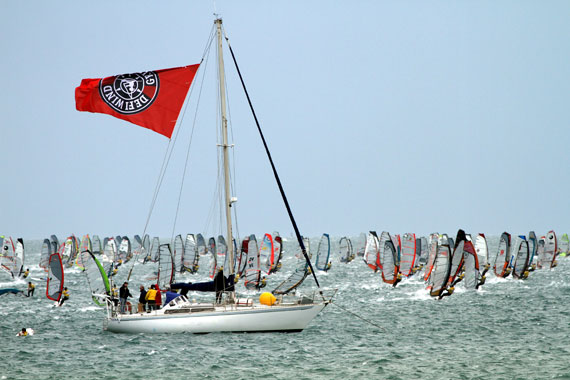 The winner of today is Pierre Mortefon, a young French rider, who managed to undertake this incredible nautical marathon of 40 miles in less than 40 minutes.

“The race went really fast. It was very windy and it picked-up really quickly! It is incredible to be on the water with 999 other windsurfers. Once jibing, when you look at this amazing amount of sails, you realize the situation! I was quite fast on the final round and managed to overtake Bieuzy (Mauffret) who was in the lead from the start, “ says a very happy Pierre Mortefon. The second place went to Bieuzy Mauffret and Julien Quentel as third completed the top three. The fastes women on the 40 miles course was the French Slalom queen Valérie Ghibaudo.

Pierre, Bieuzy, Anders Bringdal and 97 other windsurfers are lucky as they are equipped with a tiny jewel of technology: a ‘tracker’ allowing us to know their position and speed in real time through a community platform of geo-localization: MyGeoLive. “MyGeoLive is a geo-localization interface working in real time. A GPS module sends data like riders’ position and speed instantly on the web. This year, 100 “trackers” are distributed to several categories of windsurfers: professionals, amateurs, young and elders. Then the replay on the website allows the competitors to compare their ways and speeds,” says David Boulanger, co-founder of Dot Vision. 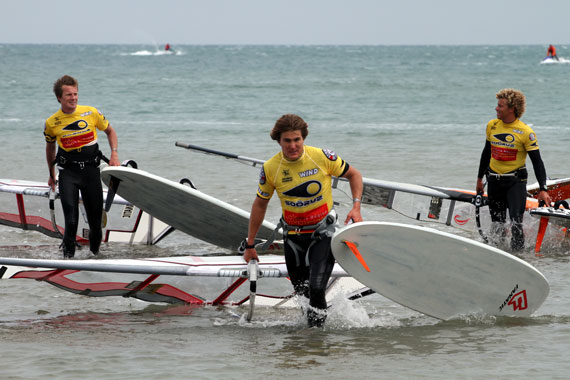 The first three out of the water - Pic: Jean Souville