Danilo Menezes da Silva aka “Chico Bento” (BRA-83) first took part in several local competitions in his homecountry Brazil and had great results. Then he got discovered by NorthSails and Fanatic and got the chance to show up on the PWA worldtour and EFPT events from 2008 on. The freestyler travelled through the world, got support by Andre Paskowski, by Fanatic/NorthSails and made a great show, not only on the water, also off the water on the stage as Capoeira performer. By the end of 2010 he decided to go new ways, left NorthSails and Fanatic and will sail with gear of RRD in 2010 like his Brazilian colleague Jose “Edvan” de Souza Pedra. Read the interview with Chico Bento below.

The RRD marketing manager Ovidio Ferrari is quite excited about the new teammeber: “Chico is a very young, talented and dedicated freestyler, so we’re excited having him in our Freestyle team. He will attend all the PWA and EFPT freestyle tour with his friend and team mate Edvan Souza, and we’re sure he will help us to spread some RRD action & love all around the world!” 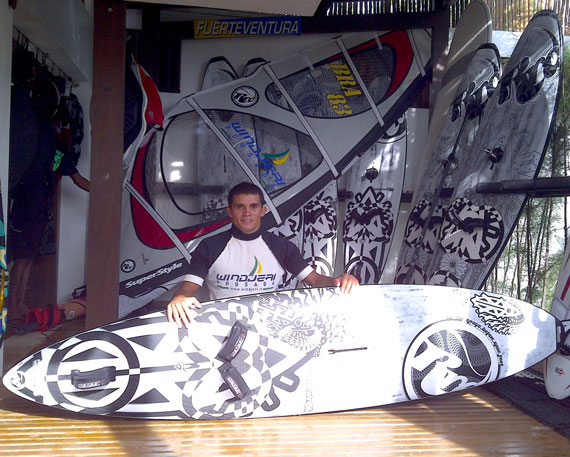 C7: After being sponsored by Fanatic and North you have now changed to RRD for the new season. Why?

Chico Bento: I will be on RRD for my next season, because they sent a good proposal for 2011 to me.

C7: Besides your windsurfing career, do you work as well in Brazil? Or can you finance your travel only being sponsored by windsurfing brands? It is quite expensive to travel from Brazil to Europe for the competitions?

Chico Bento: Now at the moment I work a little bit. Yes, to travel to Europe is very expensive. I can not travel by myself! I get money from my Windsurfing brands and also other sponsors. 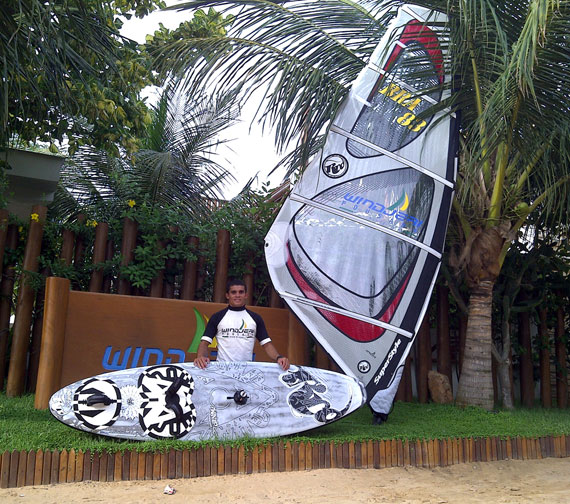 Chico Bento: I will use the Super Style MKIII from RRD.

C7: On Lanzarote you broke your hand during the football game because you were a bit too emotional for the Brazilian team. How is your hand now and are you 100% fit again?

Chico Bento: Yes, I think this was very stupid. I broke my hand during the tour on Lanzarote 2010.  Now my hand is very good after 2 months with plaster!

C7: Tell us a bit how you´ve started windsurfing and how it happened that you then came to Austria for your first event?

Chico Bento: My first time, when I saw windsurfing in my life was in Jericoacoara in 2000 with one friend from Italy, called Mauricio Gusella. He was in Jericoacoara for training and I was at the beach and tried to sell the water of coconuts. And I saw Mauricio on the water making some jumps! And I came to him and said: “Hi man, I want to practise this sport!” And after he finished sailing every day I helped him to bring his board and sail to the hotel! In the next days he came to me and said:  “Ok Chico, now we go to change. You help me every day after I finish windsurfing and I will teach you windsurfing! And after this happened, I never stopped to train windsurfing! In 2008 I was sponsered by Fanatic, NorthSails, WindJeri Pousada and my first event was in Austria, Podersdorf. 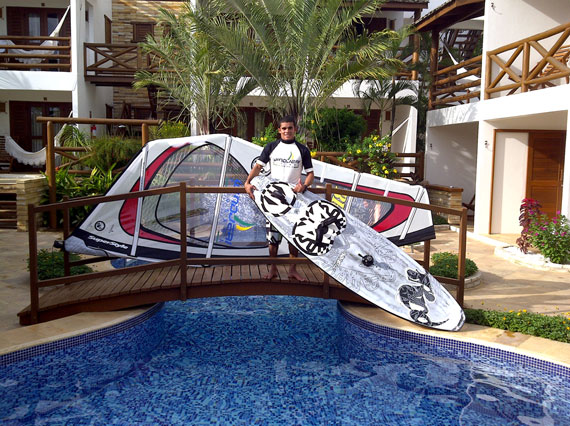 Chico Bento: Yes, I practice Capoeira for 10 years already and for sure it helps a lot for Freestyle windsurfing. I get more power on the moves and good style, when I do the moves. I think Capoeira is very good for me, because I can do all the moves relatively easy and  with a lot of control.

C7: Will you do the whole PWA freestyle tour again in 2011? Or which competitions will you attend?

Chico Bento: Yes, I will do the PWA and also EFPT again this year. And look for a good ranking.

We wish Chico Bento a successful season 2011 and really hope he can realize his dreams.

Below are some general infos about the Danilo:

I met Chico back in 2003 in Jeri, and even at that tender young age he was shit hot… at Capoeira, never mind windsurfing! Good luck to you, Chico!

Wether a sailor gets sponsored or not might have more to do with his ability, approach, attitude and future rather than his nationality, ah?

Wow you have come along way Chico and this shows a great level of character and determination.You come from such humble beginnings that alot of people will never understand just how much inner strength you have . Well done and keep aiming higher and I have no doubt you will show those out there that doubt your worth what you can achieve…..(Dr Jones- didnt your mother tell you “”if you’ve got nothing nice to say then….. ” )