The DAM-X event in Brouwersdam, Netherlands, October 7 – 11, 2015 is just about to start. The main organizers, Pieternel van der Linde and Uwe Jendrusch and their team have been working hard to make the event happen at the Surf- and Zeilcentrum in Brouwersdam, which is supposed to be one of the best freestyle spots around Europe. After staging a PWA freestyle World Cup and an EFPT tow-in competition there in 2013, they will run a 10.000 € freestyle event for men, a 3.000 € tow-in event and the first ever ladies EFPT event with 3.000 € prize-money from tomorrow on. The tow-in event will count to the overall ranking. Actually Kiri Thode leads this ranking, Tonky Frans in 2nd and Adam Sims in 3rd.

The ladies freestyle competitions are completely underrepresented so far during the 2015 season. The Brouwersdam event gives them a good chance to show their potential in a sport, which has a good level and a lot of opportunities to grow in the near future. Sarah-Quita Offringa, local Maaike Huvermann, Arrianne Aukes, Oda Johanne are just a few names, who have a chance to win the event. Brouwersdam is a spot, which fits the style in ladies freestyle very well. For the first time in history of the European Freestyle Pro Tour a female tour-champion will be announced in 2015.

A lot of riders are pre-registered: 8 ladies and 40 men. Most of them already arrived at Brouwersdam. Steven van Broeckhoven and Phil Soltysiak already made it out on the water and slided through a few Grubbies in 12 knots of wind. The wind forecast looks good for the upcoming week. Part of the registration will be on this evening and a first barbecue will be held.

We are going to run updates from here and produce a few videos. Parallel with the EFPT freestyle windsurfing and tow-in event a lot of other public water sport side events will take place for the upcoming 5 days. Stay tuned!

The EFPT spoke to Pieternel van der Linde and former Dutch freestyle pro Maarten Van Ochten, who is part of the organization team, about their motivation, the event and what the riders can expect there.

EFPT: What was your motivation behind organising an EFPT event?

EFPT: You are organizing the first ever ladies EFPT event. What was your motivation to go for it?

We felt that there’s so much potential for the ladies to compete. Lately the level of the ladies has been gone up a lot. Besides the group of women that do freestyle windsurfing is increasing every year. The Dam-X event will give those ladies a chance to show the world what they’ve got. 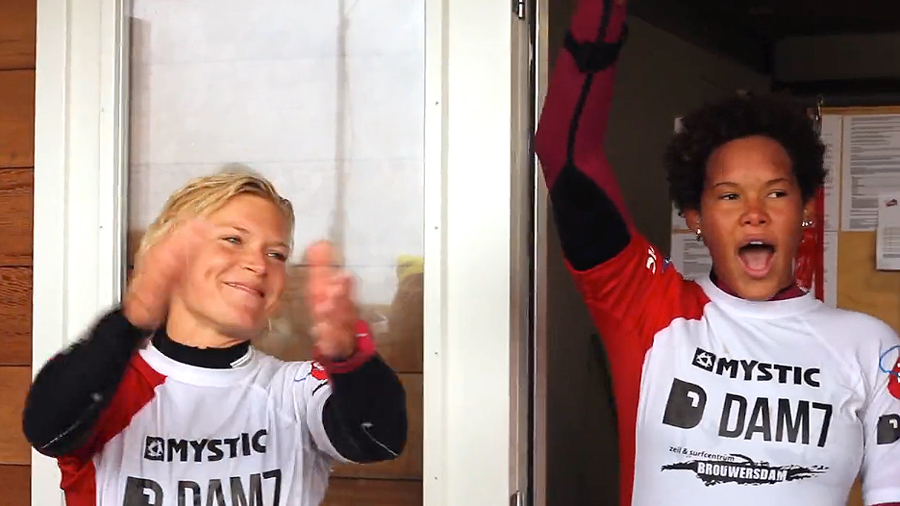 The top girls at Brouwersdam in 2013

EFPT: What are your expectations for the event?

First of all we hope that the wind conditions for competing will be great that all athletes get fair chances to compete. In other words we are very motivated to run at least one double elimination for both men and women. By running this European Championships and of course the first ever EFPT women event, we aim to promote the sport, as well as to attract and motivate people to pick up windsurfing. Naturally the riders can expect that our goal is to run a very well organized event for them.

Besides the EFPT, there will be much more going one during the entire week. This event will be a great way to get people in touch and discover the water-sports in the area of Zeeland/ Zuid-Holland. Let’s say we are targeting to raise the awareness and show the potential and diversity of the water sport around this area. That’s why we’ve chosen dates in the fall, which is the point of time when the area is getting less crowded even though the conditions couldn’t be any better!

EFPT: What can the riders and spectators expect at your event and event-site?

Having an European championship will most certainly not be all that specators will get. That’s why we called it DAM-X. At DAM-X you can also expect a big fun race, which will take place at the weekends. Furthermore we’ll have side events like parties, clinics, school-programs, masterclasses for talents, SUP by night, going live of the RTP (Training Programe in the area) and much more. Basically we’d like to reach out to the windsurfing world, but also motivate and attract those who are not that familiar yet with the sport.

Read some riders thoughts about the DAM-X event

Rick Jendrusch: For me its the best to have an event at home! It’s good to compete at my home spot and I have a different kind of pressure. Also I like to show everyone my home spot and motivate people and kids to get into water sports and windsurfing. And I can sleep in my own bed!

Steven Van Broeckhoven: It’s also my home spot so I am really looking forwards to have it there. This year it is important for me to do the whole tour, especially when it is also happening in Holland. It’s always good to have more events with more prize-money and points. Also it is really a good time there for wind so we will probably get good conditions. I think its also great to have an EFPT girls event because they don’t have many freestyle events anyways.

Adam Sims: It’s good!!! I am excited to go there! I really like the place and I am looking forward to compete at the spot that produced so many world-class windsurfers.

Adrien Bosson: I am really looking forward to this event because I like the place. I competed there 2 years ago in the PWA event. This year there will also be three events in a row which is great. We can all travel from Sylt to Brouwersdam and then onwards to my home spot in Six Fours les Plages, where we will stage the EFPT final like every year!

Yentel Caers: For me it’s only 2 hours by car and it is my home spot, too. I like both sides of it: the flat and the choppy, but I prefer the choppy actually, because it’s better for air moves. I would like to get a top 5 position, but I am sure it’s going to be hard, because there will certainly be many good competitors. And also for the girls it’s great, because they only have one PWA freestyle event in Fuerteventura this year!