Today were again no wind and waves on Cape Verde for a competition. Less than 24 hours separate Victor Fernandez from the possibility of claiming his first ever PWA wave world title! 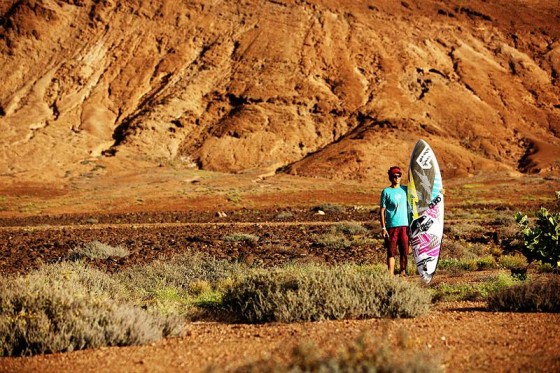 The relaxing vibe of Cabo Verde continued on the eighth day of competition, with the small waves and gentle breezes not being sufficient to hold any heats. And with a similar outlook for the final day of the holding period, the top ranked competitors overall for the year have begun their countdown to having their names etched in the PWA’s history books. The current world number one ranked sailor, Victor Fernandez has mentioned that he’s still focusing on getting through his first heat, but there must be a part of him that secretly hopes he never has to hit the water. In just 24 hours, if no more heats are sailed, he will be crowned the 2010 PWA Wave World Champion.

Sitting in second place overall, and desperately praying for no more wind is three-time former freestyle world champion, Ricardo Campello. After his shock exit from the single elimination at Curral Joul on Saturday – which would mean that if the competition reached a conclusion he would almost certainly lose his second place ranking for the year – the young Venezuelan took himself off for a long walk, presumably to have a word with the man upstairs. And judging by the forecast, his prayers could well have been heard…

2009 Pozo Wave Champion, Philip Köster will be the final wavesailor to stand tall on the podium if everything remains as it is. In a highly professional manner, Köster hit the water early at Curral Joul a couple of days ago to gain some invaluable knowledge.