The event has finally really started on the sixth day. The whole fleet was again moved to Curral Joul, which is 16km north of the main venue Ponta Preta. The waves were head high and bigger, and at least there was wind for the sailors to move around. 4 heats (each 30 min.) got sailed, a man is in hospital and the first title contender is down. 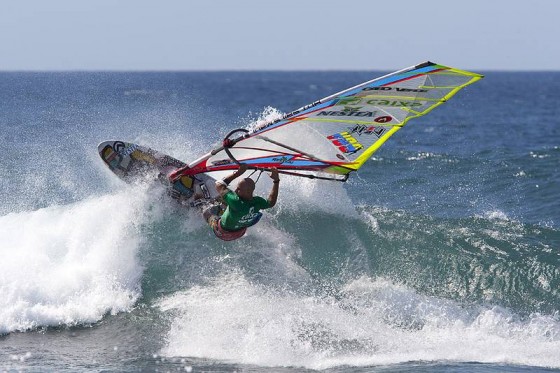 Diony Guadagnino wins against Ricardo Campello by half a point - Pic: PWA/John Carter

The first  big surprise was the losing of Ricardo Campello against his countryman in the second heat of the day Diony Guadagnino by half a point .“It was difficult and really hard. Normally I am the first guy, who hits the water. Here not. So many seaurchins. I got a wildcard and knocked my friend Ricardo out! It´s a bit sad!” Diony stated in the live cast. Campello’s turns looked more impressive, but Guadagnino was busting out the aerials. Ricardo got one of the best waves of the day, but fell down after two great turns! Now it will be hard for Campello to defend a place on the podium in the overall ranking. 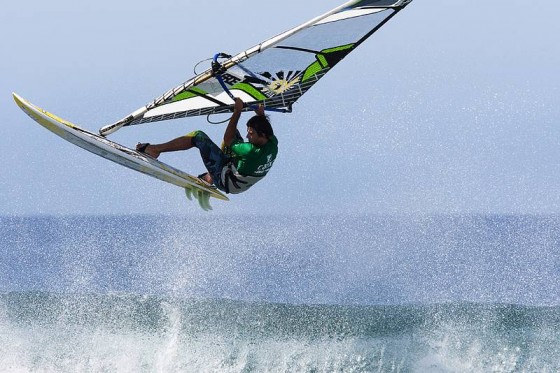 The first heat of the day was an all-British affair in the first heat of the day with Ross Williams and Jamie Hancock battling it out for their place in the top 16. Hancock caught far more waves than Williams, but he failed to ride them to quite the same standard. Williams launched into some impressive aerials throughout the heat, and in the final few seconds caught the highest scoring wave of the entire day to see him progress with ease.

Following Campello’s dramatic end, it was the turn of Alex Mussolini and Jules Denel to tiptoe their way off the rocks, and ride for their lives along the shore. Denel put up an impressive fight, but with Mussolini launching into aerials over dry sections of rock, it was always going to be tough for the Frenchman to advance. The 2009 Sylt wave champion, Mussolini won by a convincing margin to secure his spot in the final 16. 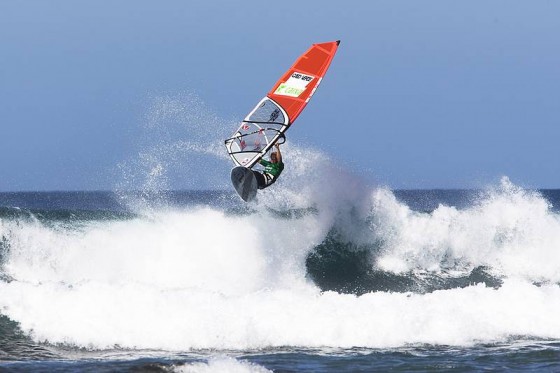 The final heat of the day saw Canarian ripper, Dany Bruch pass ahead of German, Florian Jung. After Jung’s first few waves, he spent a prolonged period stuck on the inside, unable to get back out until late in the heat, whilst Bruch racked up the points with some stylish top turns and a couple of aerials. Jung eventually made it back out, but by that time the wind had begun to decrease, and the waves flattened off leaving him with an almost impossible task in the dying minutes.

Having completed his heat against Bruch, Jung was hotfooting it over the rocks when a wave washed in and forced his sail against his leg. Now we do not know the extent of his injuries, just that he has sustained multiple fractures and multiple dislocations of his foot, ankle, and leg. We wish him all the best on his road to recovery. 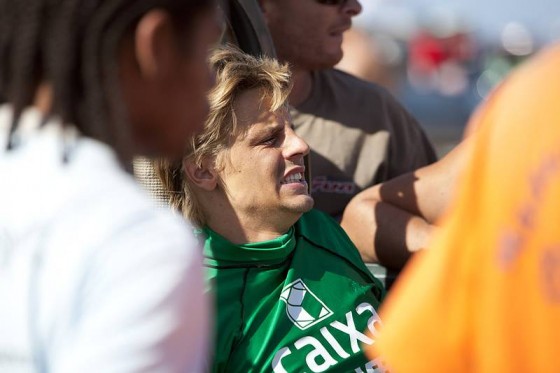 Having tried to run the 2nd heat of the ladder between Josh Angulo and Klaas Voget already five times, it came as no surprise that the minute they left the shore after Bruch and Jung, the wind completely disappeared.

The competition then was put on hold around 14.00, because the wind dropped too much. At 16:10 all riders got released for the sixth day except, Josh Angulo and Klaas Voget from heat 2. The PWA wanted them to sail their heat at the neighbouring spot “Little Hookipa”. But the plan did work out and both sailors got released at 17.00 as well!

Tomorrow´s skippersmeeting will be held at 07.30. Three more days are left. Let´s hope that the missing 11 heats of the first round can be sailed.

This time the PWA created for the first time a live judging/scoring. Have a look on the points on the following screenshot. For example: Dany Bruch scored 10 rides and Flo Jung 5. Dany, the winner of the heat, had his two best rides with 16,5 points. Flo could collect 11.5 and 10.5 points with his best two rides. 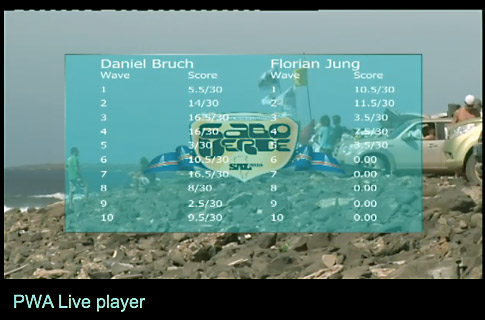 The points of Dany Bruch and Florian Jung (Source: PWAworldtour).