The PWA just released a nice preview video on the PWA wave final, which will be started on the 14th of November. Check it out. Below are two interviews, which give a nice preview out of the rider´s view. Kevin Pritchard and Robby Swift answered several questions!

We hooked up with top pro Kevin Pritchard from Maui, who got placed in third position at the last PWA event at Cabo Verde back in 2009. Kevin is hungry after his strong comeback at Klitmoller, Denmark, where he landed an unexpected 5th place, to go for more. He is one of the most experienced down the line waveriders, could win the Pistol River Wave Bash against Francisco Goya in the final.

C7: Cabo Verde will start in around 10 days! How did you prepare for the final event?

Kev: I am super stoked to get to go to Cabo Verde again. I love it there. It is my favorite place to windsurf in the world. I have been training in Maui and focusing a lot on it. I really want to do good there and hope we have the good conditions.  I have been doing a lot of video watching lately, watching the footage from the last few years, and put together a nice trailer for the event on the PWA web site. I think that helps out in visualizing what you want to do and gets your mind up and ready for it.

C7: You are 34 years old and one of the older guys, who survived the new school attack in wavesailing. There are only a few names in the top 15 which are older than 30. How can you keep the standards that good?

Kev: Well, in the nice, good, powerful waves it takes a lot of time to get figured out. The kids are coming for sure, but Cabo definitely supports classic and powerful style. The wave is so perfect there, it is just a matter of reading the wave and hitting the lip. The first year we had there, that was all time, it was just man up and hit the lip. I have never had a better day windsurfing than that. Check out the areal of my life in the PWA trailer video…

C7: Are you missing any style or tricks compared to the young style or do you think you can compensate it at a spot like Ponta Preta?

Kev: Oh for sure I am missing some tricks, but they also miss some tricks too! Some old school, pure power, down the line tricks, the strong racing legs, pouring ever ounce of muscle into a gripping bottom turn and hitting the lip with all that momentum.

C7: At the last Ponta Preta event you finished in third. Any goals for 2010?

Kev: Well, I want to win. It is the last check on the list of things to do for me. It will be hard, but I really want it. The three spots that any wavesailor would love to win at, Hookipa, the list is few, Gran Canaria, and Cabo Verde. In three years we still have had only two winners.

Thanks Kev and good luck for Cabo Verde!

Have a look on Kevin´s blog! 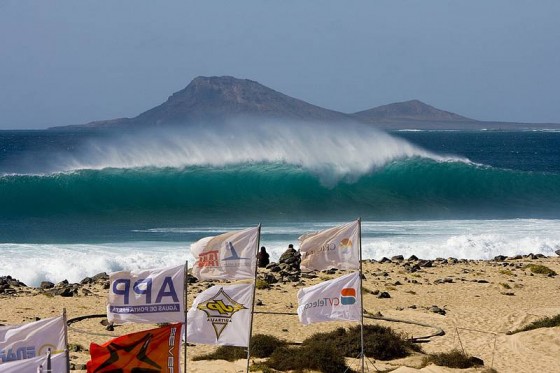 Here is another interesting interview by Kurosh Kiani, who is the man behind the Cabo Verde eventwebsite Caboverdeworldcup.com

Cabo Verde Worldcup: How would you describe Cabo Verde as a windsurfing location?

Robby Swift: Yes, It is insane. I have only had one day on Maui as good as Ponta Preta and it was at S-Turns with a huge swell from the North, pretty rare.

Kevin Pritchard: Cabo Verde for me is the best place in the world to windsurf. Maui has its benifits but when you get that perfect wave at Punta Preta, there is nothing in the world like it.

Cabo Verde Worldcup: How much equipment did you bring for this worldcup?

Kevin Pritchard: I brought 3 sails and 2 boards, plus a surfboard.

Cabo Verde Worldcup: You are both top 3 material for this event, which kind of conditions would suit you the best?

Robby Swift: Big waves with consistent sets so that there isn’t any luck involved with finding the best waves. Enough wind to get around.

Kevin Pritchard: Big down the line Ponta Preta. I still dream of these conditions. With some wind would be great too.

Kevin Pritchard: Aerial for sure.

Cabo Verde Worldcup: Have you sailed other spots than Ponta Preta or do you have another favorite Sal wavesailing spot?

Robby Swift: Ali Baba and Little Hookipa, but my favourite has been Ponta Preta.

Kevin Pritchard: I have sailed most of all the other spots but I still think Ponta Preta is the best spot on the island.

what is the name of the last song ?

Thanks for our answer. I really appreciate it! I am not focused on C7, I mean in general, if there is movie from the PWA, Robby is giving always a comment. I know that he is involved in some productions, but it would be nice if not the hole press will be focused on a small selection of persons.

Why not an interview with Kai Katchadourian. I heard this name so often, but to be honest, I do not know anything about him …

Thanks for your feedback, but honestly we don´t really understand your comment, because we did not make an interview with Robby Swift since two years I think.

Thanks for the interview! But it is necessary to get almost everytime an interview from Robby? This guy is everywhere and to be honest, it´s getting boring. There are so many talented surfers with another view and motivation on this spot.

I hope this feedback is ok for you