Rumours got confirmed. There are big changes at Gaastra sails! Gaastra announced following:

“After 6 years of designing some of the greatest sails on the planet for Gaastra, Dan Kaseler is moving on. Dan has pushed Gaastra to new levels of performance and continuously innovated the brand. He was instrumental in setting up the new factory and will be missed. Gaastra wish him the best for his new endeavors. All Gaastra’s 2011 wave and freeride sails have been completed by Dan and showcase some of his greatest work to date. Gaastra’s new designer is Peter Munzlinger, who was the designer of Point 7 in the previous years. Peter will continue the great success of Gaastra sails. He is in charge already and more details will be announced shortly.” 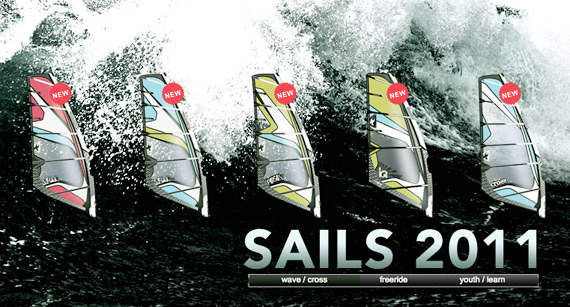 Gaastra descibes in some lines, who Peter Munzlinger is out of their view:”Peter was born in Germany, then he grew up in Italy. Peter started his sail designer career very young at North Sails creating his first success, the Prisma, a real best seller at this time. After that he was hired by DaKine Hawaii as they wanted to make a windsurfing sails business, but that project never really materialized so he started his own Yes Sails brand. The start was immediately a bang as with his teamrider Andrea Cucchi the revolutionary 2 cam Yes racing sails immediately won most of the races in Italy and also internationally, at the point that many top World Cup racers used them even not being sponsored.

In the last years Peter worked with longtime friend Andrea at his brand Point 7 creating again attention with those so different looking black sails. One common point in Peter’s sails through the years has been the speed and the ease of use. And also the dynamic and active rig response, that many customers have always appreciated.

Now with Gaastra Peter finally has the chance to work with one of the “big names” and fully show his potential thanks to the structures and access  to materials he only could dream of in the past. Living in Sardinia he has many great spots in his neighbourhood with great conditions for testing all year around. He is an active and passionate windsurfer since ages and has been a racer for many years. So he is able to feel in first hand the products he is developing and has a great communication with his team.”

So let´s see, how things will run and if Peter will follow existing concepts or if he will design totally new concepts. Still he has time to develop excellent 2011 racesails.

Read some interesting comments by Barry Spanier , saildesigner of MauiSails, concerning the change at Gaastra.

Didnt PM go bust with his Yes sails… Those sails were really ugly!!

omg!! this is really shit for gaastra!!
better if i sell my gaastra quickly..fuck

i also dont like the news…:-(
i hope that the wavesails will stay as good as they are or even get better…or do we have to change on vandal now?

Shit, Gaastra will never be the same again..