Western Australian based Ben Newson went for an adventure to the 30km offshore outer reefs near Cairns on the East coast of Australia in September 2010. Ben brought a GPS and got a great 2 sec peak of 39.7 knots and a Nautical mile of 35.91 knots in the ocean waters. 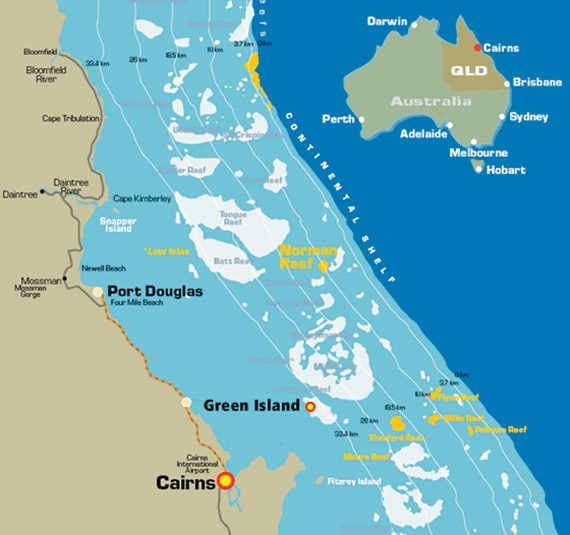 A map from the area with the Green island on it.

“As Perth was in the grips of one of its coldest winters on record I was boarding a Qantas flight bound for Brisbane.  My lovely girlfriend agreed after hours of torment to not bring any checked baggage allowing me to take full advantage of Qantas’s 23kg per person baggage allowance.” You beauty!”

The Bureau of Meteorology is calling for a 25-30 knots of wind from Cooktown to Cardwell, so Ben put a call out to a few of his old mates to go for a spin on the ferry  to Green Island on the Great Barrier Reef as I knew that it would be one of those classic days.
Cameron however had other ideas. It seems since I’d been gone he’d bought a boat. Quite a big boat at that. At nine o’clock the next morning I met with Cameron, Lochie and Kingy at Yorkeys knob boat ramp to make the 30km trek out to Green Island. “This isn’t the most pleasant of trips as you are punching across 3-4 metres of short fetch wind swell and chop in 30knots of wind.”
The plan was for Ben and Lock Stock to rig up on the island and Cameron to drive the boat the 8kms across as support until we got to Arlington Reef. Ben rigged his 6.4 KA Koncept and a prototype Nude 90 litre speed board that his good friend James Hooper, the father of Nude Sailboards had let him bring over for the trip.
They both set off from Green island and powered out into the open ocean swells hoping to reach the sanctuary of the reef flat in around 20 minute’s time.
“Sailing in this kind of sea on speed boards is no easy. It was very difficult to bear downwind and stay in control at the same time. We ended up pointing too high and had we kept going we would have missed the reef completely. Next stop Fiji!” Ben reported after the crossing.

Ben with his friend on the flat water next to Green island.

Lochie was doing his best to hang on and Ben was starting to doubt whether or not this was a good idea given that the rain squalls coming through where pushing 35 knots. Both had lost sight of the island, the boat and even each other at times. Not to mention the fact they were about 30kms out to sea. The call was made to head back and have a bit of a sail around the island to see what the weather was going to do. Lochie phoned Cameron to let him know what was going on and after a bit of a pep talk and a change down to his 5.5 a new game plan was launched into action.
Both set out again in search of Cameron, who had already rigged up in waist deep water on the reef flat and was blasting around the inside of the reef unbeknown to us. About half way across they could see Cam’s sail in the distance blasting off downwind and the 27 foot Striper anchored in the safety of the lagoon.
“Soon enough I was navigating the breaking waves on the reef shelf and hoping there was enough water so that one of the coral bombie formations didn’t get to up close and personal with my fin.” Ben explained the situation.
“I was a fairway upwind of the others so I gybed and was going to have a cruisy run down to see what was going on however something inside me changed. I became an adrenaline craving speed freak with the words of Ricky Bobby ringing through my ears “I just wanna go fast”. Looking back on it now I’m fairly sure it had something to do with the acres and acres of flattish rather smooth water with the opportunity to attack it at any angle I could see fit. I dropped the hammer on the Nude streaker and screamed and yahooed for the next 3 kilometres or so downwind as I wove my way through the tiny rolling waves getting that extra boost as I squirted down their faces.” Ben´s comment on his speedrun with the power of wind and waves.
This took place for the next hour trading runs with Cameron and Lochie and getting faster each time. By the time Ben was buggered he had 39.7 knots displayed on his GPS with a 35.91 average over a nautical mile, his personal best speed and ever so close to crack the 40 knot mark. The hardest part was getting back upwind for the next run. They only exploited a small section of the reef, but it goes for about 12kms and has a slight bend to keep them on their toes.
De-rigging in the water with the tide ripping out and the boat swinging from side to side on the anchor rope was no easy task but Ben, Cam and Lochie eventually got all the gear back into the boat and made their way back to the boat ramp. Some of the waves out in the open ocean were breaking at the top dwarfing the 27 foot Striper as it got tossed around like a tinny (=beer can) in a cyclone. 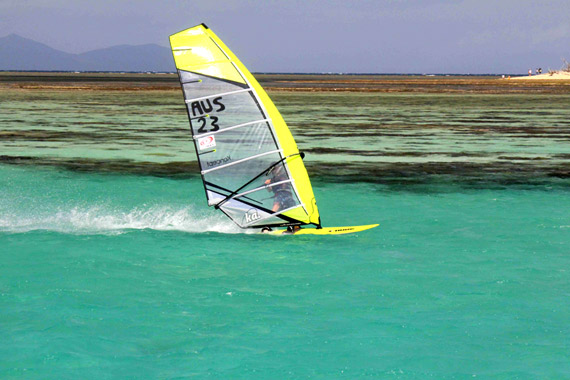 Ben speeds up this time.

“The reef itself is the shape of a massive boomerang and is like a plateau that rises up from the deep, turquoise coloured waves break over the magic colours of the coral below for as far as the eye can see. These waves push across the reef flat and are what also created the awesome sailing experience we had that day.

Next time I’ll be taking my wave gear!” Ben Newson 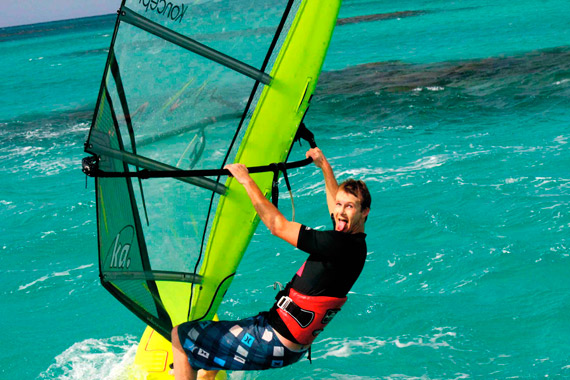 Ben Newson with a big smile in the warm waters next to Green island near Cairns.