Mathias Genkel left Germany just before Christmas 2021 and travelled to Italy in search of warm weather, sun, wind and waves. The journey became a success. Mathias met friends,  sailed in a lot of different conditions and recognized how nice life is.

It was at the time before Christmas when I felt that leaving the daily routine behind and going on a windsurf trip in a van was something that my soul needed. I cannot really explain that feeling. It’s like when you watch the cars on a nearby motorway driving south and you feel an inner voice telling you to go on a journey. I knew that I wanted to go south because northern Germany and the nearby Scandinavian countries can be quite bleak and cold in the winter time. Windsurfing here between November and February can still be a great adventure and you can get that cosy “hygge“ feeling when renting a house and sitting by the fire place after a cold session – but what I needed was something to warm my heart. Mathias Genkel about his intention to travel to Italy

Read the full story by Mathias Genkel about his trip through Italy:

It was at the time before Christmas when I felt that leaving the daily routine behind and going on a windsurf trip in a van was something that my soul needed. I cannot really explain that feeling. It’s like when you watch the cars on a nearby motorway driving south and you feel an inner voice telling you to go on a journey. I knew that I wanted to go south because northern Germany and the nearby Scandinavian countries can be quite bleak and cold in the winter time. Windsurfing here between November and February can still be a great adventure and you can get that cosy “hygge“ feeling when renting a house and sitting by the fire place after a cold session – but what I needed was something to warm my heart.

On the road to Lake Garda

So the plan was to drive south straight after school and to make it to Lago di Garda on the same day. After a couple of hours on the road I suddenly realised that the sky was changing. Its grey colour, its standard setup in the winter time in northern Germany, started to give way to some red colours. I could actually enjoy a wonderful sunset – a silver lining on the horizon. Later that night, a beautiful full moon would rise when I crossed the Alps and it felt magic to see the snow capped summits shimmering on top of the dark mountains. When I arrived in Torbole just after midnight, everything looked strangely familiar but a lot more quiet than usual. I had a cold night in the van sleeping close to the shores of the lake which was protective against the crisp cold coming down from the mountains. 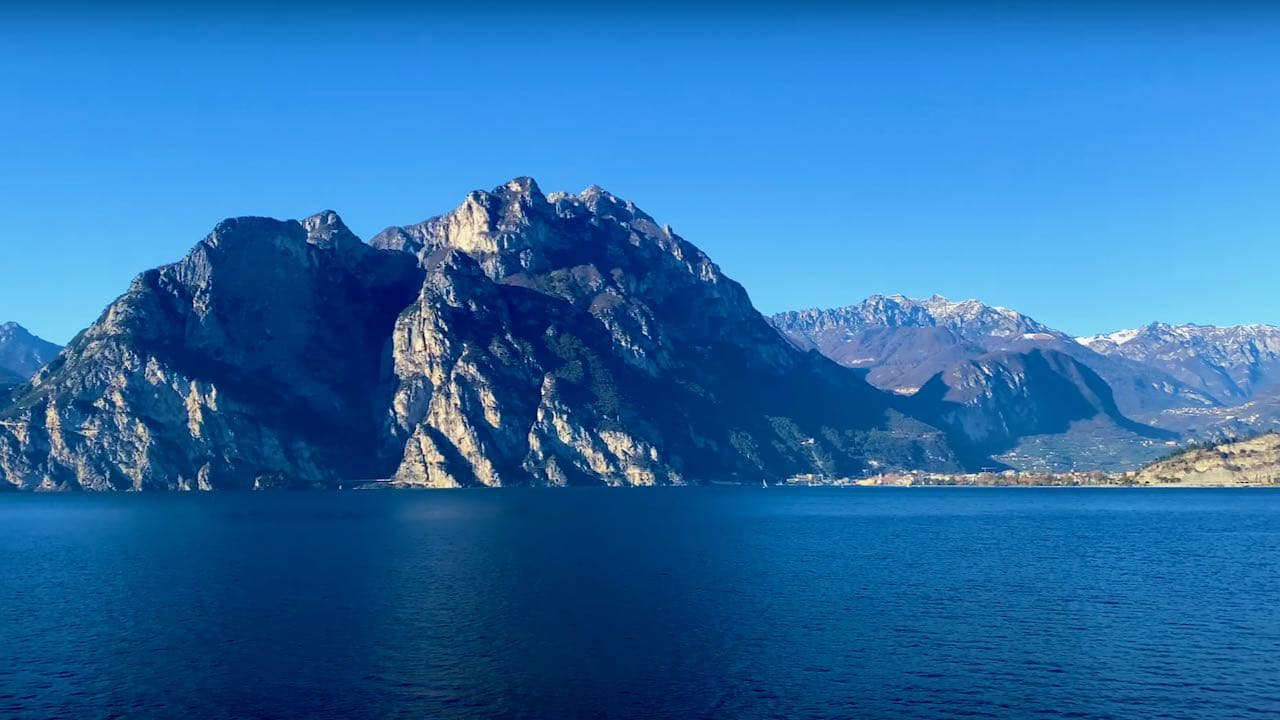 Lake Garda in the winter

Crashing on my rib

The next morning, there was no wind, I just went into a café in Malcesine which was full of local people, ordered a coffee and a croissant and sat there quietly, listening to the people talking in Italian, feeling the vibe of the place. I don’t know why but it just made me happy. That moment already felt like it was worth the journey.
Later that day, I met Meiky Wieczorek, one of the best freestyle windsurfers on this planet, who has an appartment overlooking the lake. He invited me to stay at his place for a couple of days. We had two or three great early morning sessions with some big moves that nobody filmed because we windsurfed like in the middle of the lake where the chop was big. This allowed for some air moves and I saw Meiky rotating through some amazing moves with ease and precision. One morning, I tried an Air Kabikuchi over a big piece of chop and crashed onto the boom hurting my rib. This crash would cause a lot of pain for the rest of the trip and hinder my performance on the water but somehow that didn’t bother me a much as it would have a couple of years ago.

After a couple of days at Meiky’s place I decided to head further south with no fixed destination in mind. I saw an average forecast for Voltri, which is close to Genua on the Mediterranean. From what I had heard, this spot was supposed to work well in offshore Tramontana winds. Plus, you can decide to drive to Southern France or continue your trip through Italy. When you are in Voltri, you cannot imagine how this spot could possibly work in offshore winds. There are mountains and tall buildings just a couple of metres behind the beach but somehow, the wind funnells through the valleys and provides for some gusty freestyle conditions in turquoise waters. The local windsurfers were so friendly! Unfortunately, my Italian isn’t so good but they were so cool and even said good bye to me in German, which just warmed my heart. They also told me that the ferry to Sardinia leaves from Genua at 10 in the evening. So I really spontaneously just booked the crossing after that session. 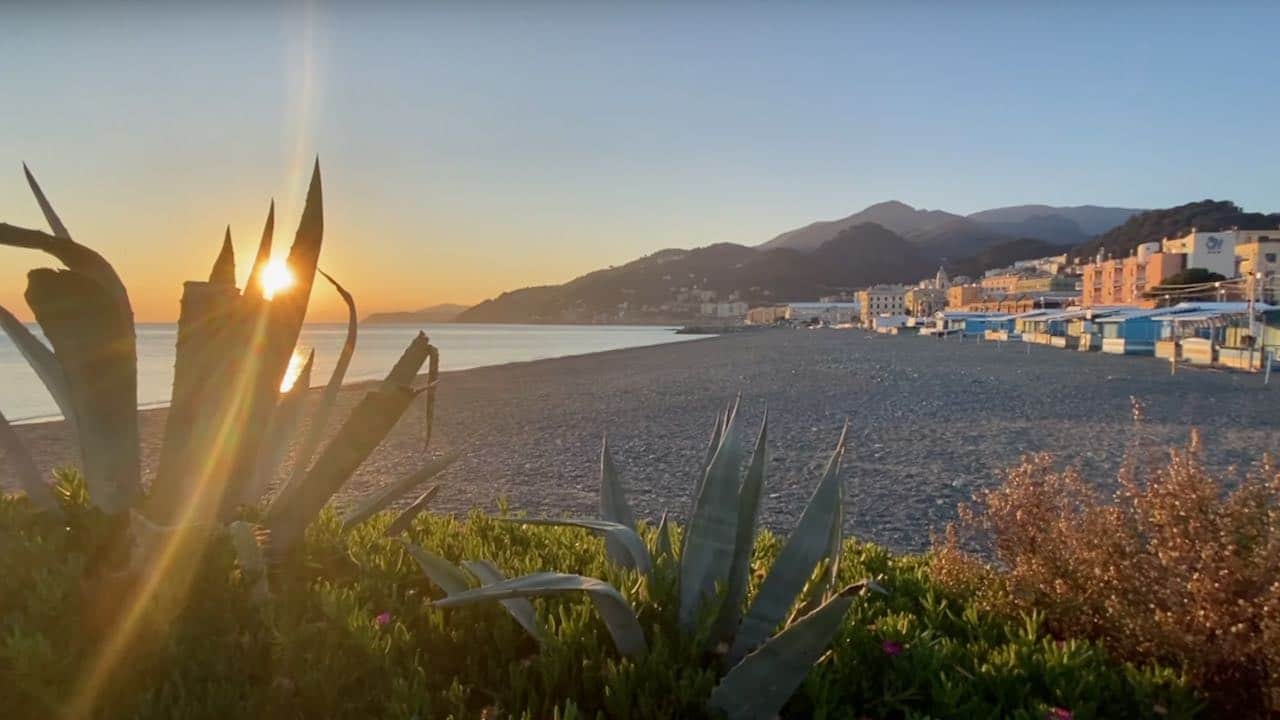 The ferry sailed to Porto Torres, which is on the north western coast of Sardinia. The forecast was a bit tricky and I didn’t have a lot of information about the island. So I first drove to Stintino, which is the north western most point of the island. The wind was too offshore, but I really recommend the place for its water colors and cliffs. Thankfully, Paolo “Bionda” Biondani and Stefano Lorioli, two amazing windsurfers who live for the sport just like I do, provided me with some precious information about where to go and in what direction. So despite the tricky forecast, we could enjoy some relaxed 4.8m sessions in south westerly winds near Alghero on the western coast.

I spent Christmas in my van in Alghero, which wasn’t so bad, because you could walk through the historical city centre, and even go shopping on Christmas Eve. At the same time all shops in Germany are closed.

The forecast became even trickier after Christmas and I decided to head to Porto Pollo on an average forecast. This was probably not the best idea. Sardinia is quite big and when I arrived at the spot in the afternoon, most of the wind had already disappeared. I checked the forecast after the session and it showed some encouraging colours on the wind map for the south and south western coast of the island. So I returned to Alghero on the same evening. We had a rainy session there the next day and I finally headed south that evening. By chance, I met Steffi Wahl and Dominik Röckl, two very ambitious windsurfers, surfers and wingsurfers from Northern Germany at a parking space close to the sea and we talked about our impressions of Sardinia. Just imagine: you travel thousands of kilometers, and by chance, you meet some other windsurfers that you know from your homespots on a very remote beach somewhere on the island of Sardinia! 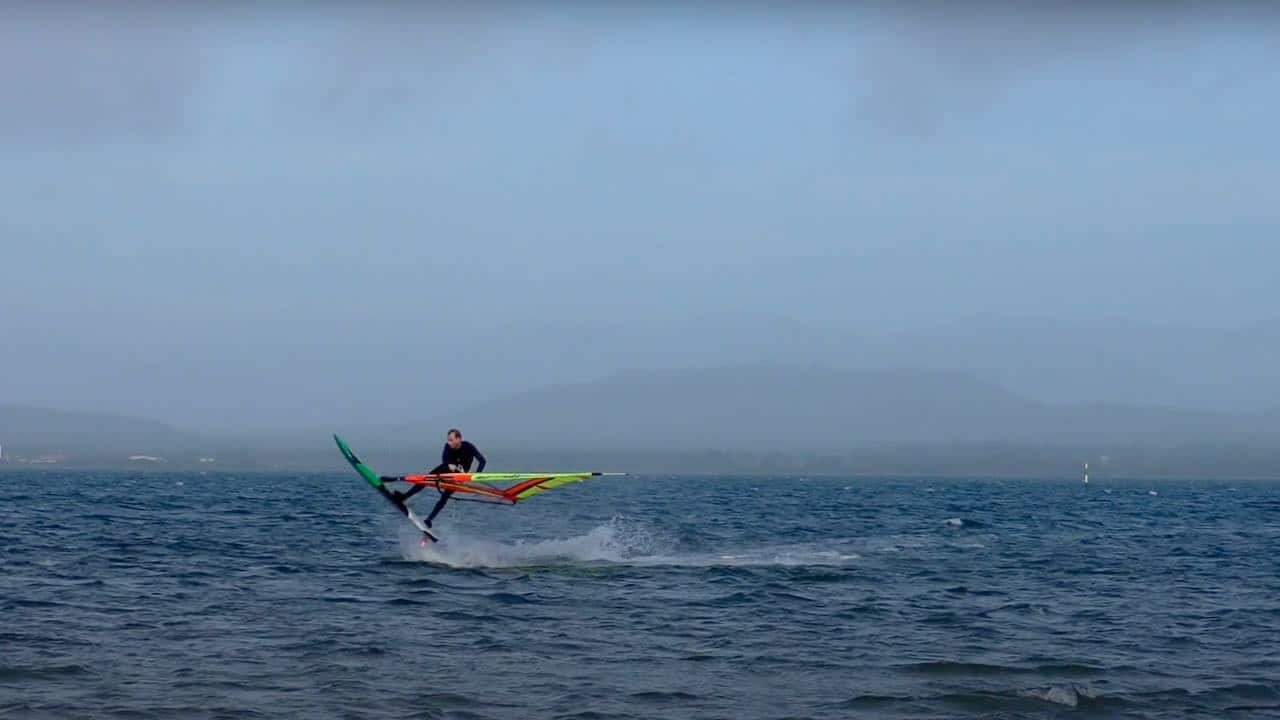 The next morning I finally arrived at Sa Barra. The spot was completely empty, the station closed but the wind blew nicely for 4.8m. Even Paolo arrived and we decided to windsurf at Chia the next day. There, we probably had the best session of the trip even though the waves were tiny. But that didn’t matter. We could sail on our 3.6m sails and it was just amazing how fast you could go in those offshore winds.

We had another great 4.4m session in Sa Barra where it was 19°C with the sun in your face in the afternoon. At night, I slept close to a remote beach on the west coast of the island of Sant’Antioco. I realized that the stars shone brightly and watched them for an hour or so. It was just the sounds of the breaking waves, the fresh and salty air and the dark sky with the shimmering stars above me. It was at that moment, when I realized that the world is incredibly beautiful. Despite all the challenges that we as humanity are facing right now, the world, or let’s call it the universe, is in perfect harmony and things will go on. Just like the stars are slowly moving in the night sky, just like the waves keep breaking, the rivers flowing and the birds flying and singing. It’s those details that we should pay attention to in these days when we feel discouraged by outside circumstances. 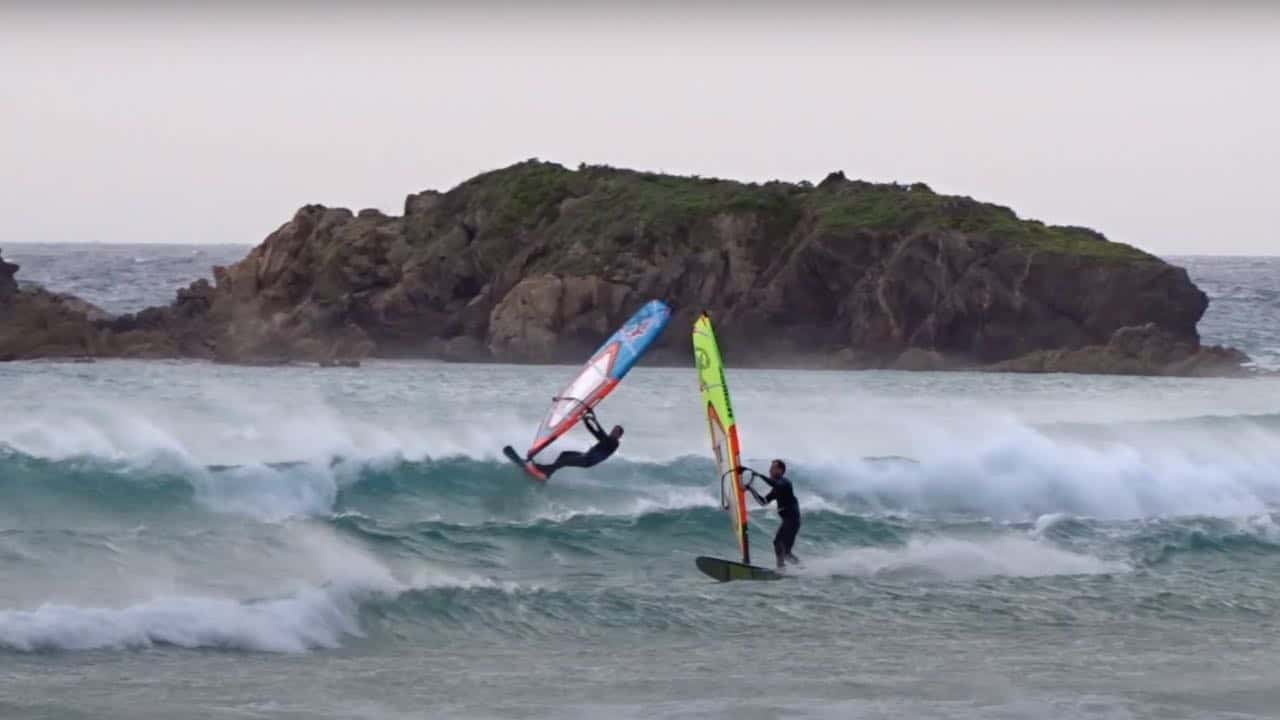 Wave action in Chia, together with Paolo Biondani.

After just a bit more than a week on the island, I headed back to Lago di Garda where they announced some great northerly winds again. I could also meet with Tilo Eber there and we were hoping for a session at Al Pra. However, the wind just didn’t materialize and there was a thick layer of fog on the lake. Time to hike up the mountains and enjoy the last sunset of 2021, wishing for a better 2022.
Looking back, this trip was really important for me. Not so much because of the conditions – it actually wasn’t that epic, but more because of what I learned on this trip: That life is beautiful, that we as humans should look up from our phones, start talking and listening to each other again and finally embark on a journey – be it a road trip or an inner journey if you are stuck at home. 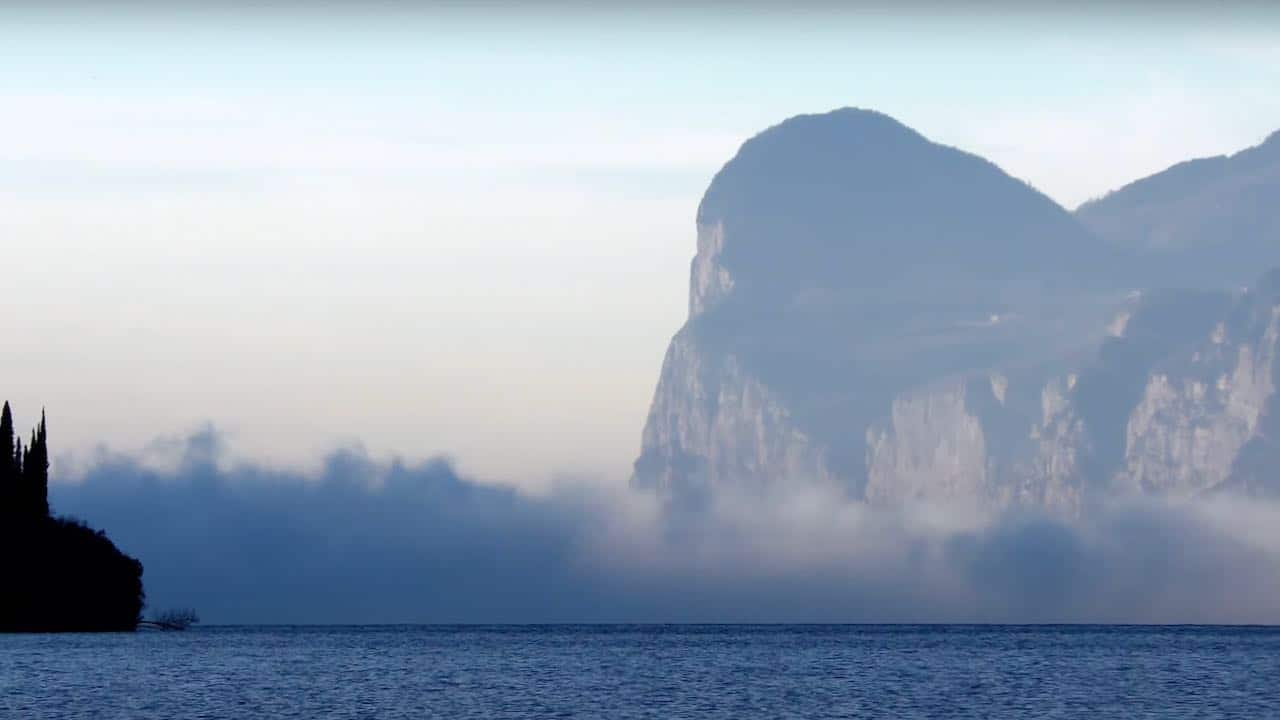 reading got me goosebumps, almost like i felt i was there, watching the stars, listening to the ocean, and only think about the beauty of life and the next freestyle session!