From Oct 29 until Nov 11 over 100 wave riders from more than 20 different countries will compete against each other at Ho’okipa on Maui (Hawaii). First it was the turn of the AWT riders and after the AWT competition the PWA started its final event. The conditions allowed to complete the AWT pro men category first. Boujmaa Guilloul won the event and Kevin Pritchard the AWT overall tour ranking. Directly afterwards the PWA continued with the men trials, the men single elimination, the ladies single elimination and started the men’s double elimination. On November 5th the double elimination got completed in difficult conditions. Easterly winds and westerly swell caused a lot of crashes and big chop on the waves. The battle in between Thomas Traversa and Victor Fernandez saw a happy end for the Frenchman, who got second in the event. Local Morgan Noireaux, he recovered well from an injury in 2013,  won the event with exceptional great wave riding. In the ladies category Iballa Moreno, who already secured her title as her twin sister Daida, the current tour leader, lost in the first round of the double elimination, stayed cool and won the first final against 17 year old Fiona Wylde. Iballa won the event and the title at the age of 36, what’s probably one of her personal career highlights.

29.10. 2014 – Day 1
Yesterday, on the opening day of the Starboard Severne PWA/AWT Aloha Classic saw the start of the AWT Pro division. The AWT is run as a dingle elimination, with the winners of the first round jumping to round three, whilst the third place sailors are given a second chance in the repercharge.

Trials Heat 1 – Glickenhaus vs Rehrer vs Talma vs Miller

Trials Heat 2 – Machon vs Metcalf Perez vs Spadea vs Faurot

Trials Heat 4 – Mullen vs Naalisvaara vs Aiken vs Naish

Marcilio “Brazinho” Browne and “TT” Thomas Traversa were the first two riders, who made it into the final. Robby Naish was the best rider, who made it in the comp through the trials. He finished 5th in the single elimination. Then the day was over.

The ladies single elimination got started first. After a qualifying heat and the first round of the ladies the second remaining men’s semifinal was on. Maui resident Morgan Noireaux (17.12 out of 20 points) and Spaniard Victor Fernandez (16.76 points) were the best two riders and made it into the winners final. Ricardo Campello, he landed a perfect Air Taka, missed out to qualify for the final and lost his PWA wave title chances. Now just Fernandez or Traversa have the possibility to win the 2014 PWA wave title at Ho’okipa.

Awesome men’s final: Morgan Noireaux won the final with two high scores, overall above 18 points, he impressed with fluid fast wave riding  and nice landed aerials off the lip, Thomas Traversa was on his heels, with radical wave riding and a frontside wave 360, he had a high 17 score overall. Victor Fernandez made it in third and Marcilio Browne in 4th, who probably risked a bit to much in critical sections, at the moment Thomas would win the 2014 PWA wave title

Wonderful wave final of the ladies single elimination: Iballa Ruano Moreno won with a huge Aerial off the lip continuing with a wave ride getting a 9,5 for that. Young Fiona Wylde with fluid wave riding in 2nd and Tiffany Ward in 3rd.Experienced Junko Nagoshi made it in 4th.

The men’s double elimination got started at the same day. 7 heats got completed and we saw a few upsets. John Skye, Flo Jung and Philip Köster for instance did not make it to the second round. Levi Siver, one of the title contenders at the Aloha Classic, did not make it through the second round. Most of the Ho’okipa approved made it into the top 16 of the double elimination: Jason Polakow, Kevin Pritchard, Josh Stone, Graham Ezzy, Robby Swift and young talented stuntman Antoine Martin. 4 riders out of heat 23 still have the chance to qualify for the top 16 and win the event. 11 or 12 more heats have to be sailed to see the final results.

The 5th day was an exciting one. The surf wasn’t that high, but nice sets of waves were breaking at Ho’okipa, what allowed head judge Duncan Coombs to continue with the ladies and men double elimination. 8 more heats got completed in the men’s fleet and Graham Ezzy was the sailor of the day. He advanced through 4 heats, but then got stopped by reigning 2013 PWA World Champion “Brawzinho” Marcilio Browne, who had two incredible waves with the high score of the day, a 9,5 and a 9,27. Marcilio now still has the chance to win the event. He has to win 4 more heats, against Victor Fernandez, then against current PWA world tour leader Thomas Traversa and in the final twice against Morgan Noireaux. Graham can now relax. He finished the event in 5th.

In the ladies double elimination we saw a great comeback of French Alice Arutkin, who sailed with a lot of style and nice rhythm on day 5. She made it through 4 heats and got stopped by Maui local and former PWA freestyler Junko Nagoshi. Alice made it in 5th place at the Aloha Classic and made it on the podium in third place in the overall year ranking. Iballa Moreno already secured her title as her twin sister Daida, the current tour leader, lost in the first round of the double elimination and Iballa had won the single elimination.

On day six of the Starboard Severne Aloha Classic the decision was made early on to release the PWA men’s and women’s fleets, due to the swell having dropped significantly from the previous day. However, it wasn’t a lay day in Ho’okipa as the AWT fleet resumed their amateur contest.

On day seven the competition was run for the amateurs. The pros, who are still in the competition, had another lay day. A fleet of 63 competitors were competing for the title in over head high glassy conditions.  Glenn Haslbeck, he lives in Vancouver , Canada takes the Amateur Severne Starboard Aloha Classic title, and Dan Thomson secures the AWT 2014 Tour win. Glenn spends a lot of time on Maui during the winter months, but was off the competitions for a while. In 2006 for instance he qualified through the Amateur event with a 17th place for the pro event of the Aloha Classic. He is well know in the wave scene.

The AWT Amateur’s final was a true spectacle of windsurfing with legend Jeff Henderson(owner of HotSailsMaui) taking on Harley Stone (the son of another legend, Josh Stone), Paul Karaolides of Fish Bowl Diaries and Vancouver/Maui local Glenn Haslbeck.

Glenn’s aggressive turns, power and speed through the waves is what gave him the edge over Harley. Paul, made it in third (12.267 points) and Jeff in fourth (10.5 points).

The final heats were done,  3 ladies heats and 3 men heats. Marcilio Browne defeated Spaniard Victor Fernandez and the 2014 title chances for Victor were gone. In the following Brawzinho had the chance to make it on the podium in the overall ranking, but he needed to win against Thomas Traversa. He didn’t and Ricardo Campello took the third place overall. Marcilio made it on the podium at the Aloha Classic. Traversa again had local Morgan Noireaux as the opponent to beat in the final. Traversa was relaxed, having the world title in the pocket, but Morgan windsurfed extremely well and won the first heat straight and the Aloha Classic title.

The ladies sailed three heats, too. Tiffany Ward defeated Junko Nagoshi and secured a podium place. In the following heat 17 year old Fiona Wylde sailed with style and qualified for the winners final. The final was tough. Big sets came in and gave the two finalist a hard time in the westerly swell and easterly winds. Iballa and Fiona were ripping and swimming behind their gear. In the end it was Iballa who won the final risking a lot – she even broke a mast extension in the heavy white water – by 2.64 points difference. 20 years of experience and a perfect caddy service of twin sister Daida paid off in the end. 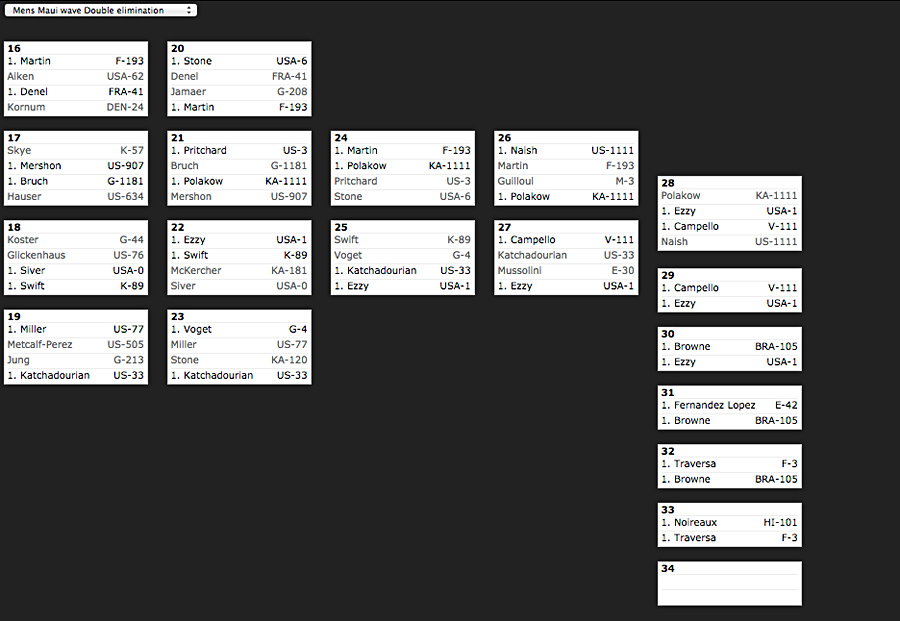 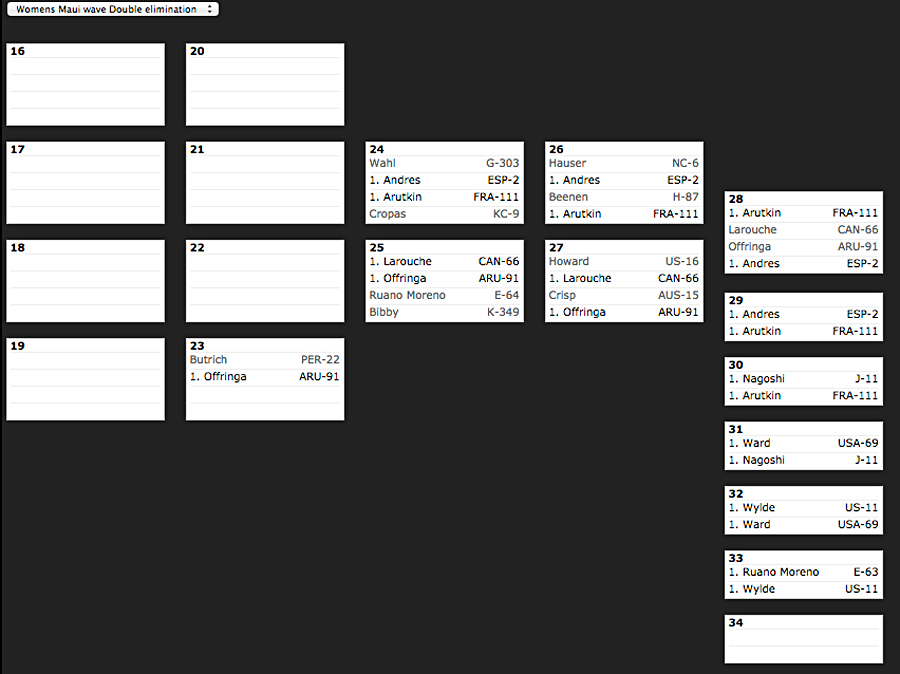 Hopefully they’ll sort things out and the livestream works today. Get the AWT Pros finished and lets move to the ultimative PWA showdown…

0
This website is using Google Analytics. Please click here if you want to opt-out. Click here to opt-out.
We use cookies to ensure that we give you the best experience on our website. If you continue to use this site we will assume that you are happy with it.OkNoRead more