Aloha Classic 2017 – Re-watch the Live Cast from the pros

Day 13 at Ho’okipa was an exciting one. The IWT and Duncan Coombs continued with the pro men and ladies divisions. It was Friday, long big waves were breaking and light but steady wind was on (it filled in quite late). Duncan Coombs continued with the pro men quarter finals. The heat duration was 28 minutes to give everyone a fair chance to get two proper waves. The set of waves with 6 waves were big and sometimes huge. A lot of white water was up at Ho’okipa. We saw impressive wave action from both, ladies and men. The local stars dominated in the wave arena and it was great to watch.

In total in the pro men division 7 more heats need to be done to know the 2017 winner. All big names were still in the game. At the moment it looks like a local has the biggest chances to win the event. Siver, Roediger, Noireaux, Pritchard…who knows!

Graham Ezzy – “The day started with rain and no wind. The voices on the beach were mostly pessimistic that the wind would show up at all. 2 o’clock is the unofficial cutoff for wind at Ho’okipa. If it doesn’t show up by 2, the wind is probably not going to come at all. At 1:30, just as everyone was about to pack up, the clouds cleared and the whitecaps appeared. The first heats were tricky with big swell and onshore wind. The onshore winds make wave riding more about timing–we didn’t have the wind to power out of mistimed situations. There was a moment during the day–the last few minutes of my heat and most of the next heat–where the winds turned side shore and there were some really good waves rides had by all competitors. I’m really looking forward to tomorrow. The winds should be more easterly–offshore–and the swell should be a little smaller, which will be nice because today there were mogul sized chops on the bigger waves.”

Unfortunately Robby Swift, who sailed great did not make to the semis. Juban and Roediger were going too strong on that Friday afternoon. Robby missed to land his fs 360°. We as well would like to mention Jake Schettewi, who rides the waves effortlessly and is great to watch. 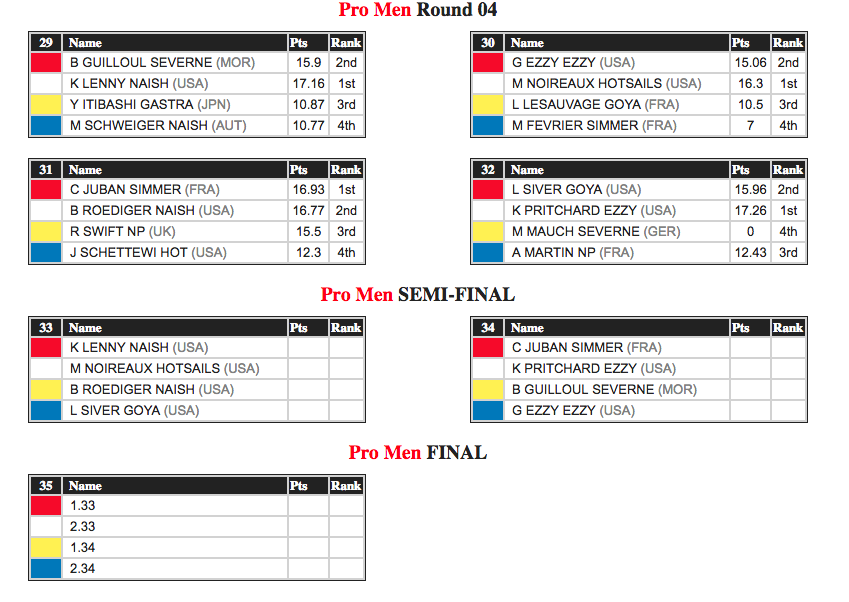 Sarah Hauser, Shawna Cropas, Taty Howard & Vicky Abbot are the four ladies, who made it to the ladies winners final. Sarah Hauser was in her own league, picked up the biggest sets and got rewarded with the ladies high score of the day (15.26 points). Taty Howard, the Morocco winner, impressed everyone with great wave selection and very active  decisions. She has the chance to win the title for the first time in her career. Shawna Cropas and Vicky Abbot fought till the end of their heats and it paid off for them. They are still in defeating Fiona Wylde and Motoko Sato.

Just the final of the ladies needs to be completed in the pro ladies division on Saturday, November 11th or Sunday, November 12th and we will know the 2017 ladies Aloha Classic winner 2017. We can expect an exciting and action packed final on the weekend!