A short trip to Pozo Izquierdo 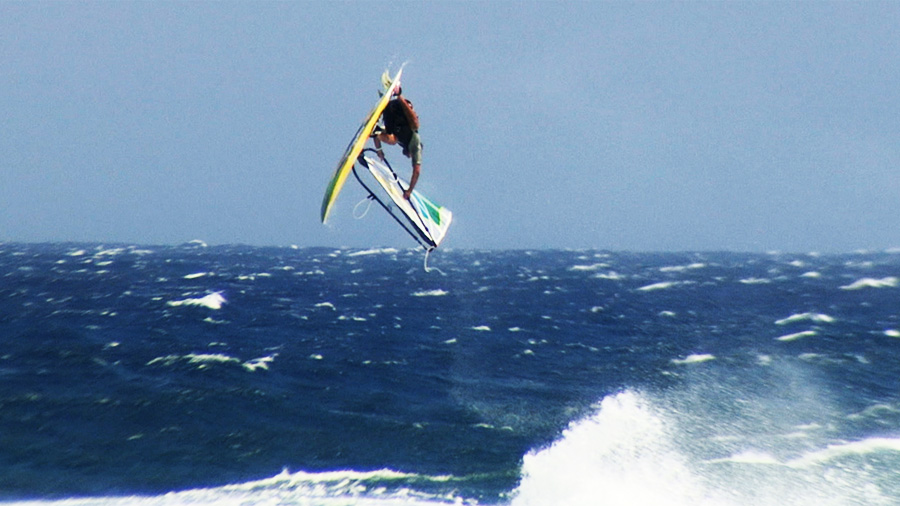 Marcilio with his quad upside down at Pozo on May 10th

Graham Ezzy, Robby Swift and 2013 World Champion Marcilio “Brawzinho” Browne spotted a great forecast for the Canaries and booked immediately their tickets. After a long journey the three friends arrived on Gran Canaria and enjoyed radical conditions at Pozo Izquierdo. Read a quick update and check out a few shots from May 10th!

Continentseven: How is it to be back on Gran Canaria and how does it feel to sail in the windy onshore conditions.

Graham Ezzy: My first time in Pozo, I was 15, and I stayed by myself for 2 months in a little hostel in the upwind part of Pozo’s town. It was my first time living alone and I made friends with the other hostel guests, including Ben Proffitt. I returned for 2 months for the each of the next 5 summers. In total I’ve spent around a year of my life here, so Pozo Izquierdo is a kind of home for me. 4 years have passed since I was here last. Not much seems to have changed. It’s still crazy windy and the rocks hurt the feet.

Those 6 summers that I spent here were part of my formative years. On Maui, I didn’t have a social life because I was so consumed by school and windsurfing; my summers in Gran Canaria were the times I could let loose and hang out. And PWA Wave Tour became a sort of family. For example, I can remember KP giving me life advice in El Viento (local coffee/restaurant) when I was 16. Feels great to be back. A bit nostalgic because the place recalls all these important life-memories. As a fan of windsurfing, I loved competing against legends like Bjorn Dunkerbeck.

Robby Swift: Maui was really crap. We had no wind for weeks now and the forecast is terrible, so for sure it was worth coming over here. It’s always scary the first time you get back on the water here. It doesn’t even look that windy but when the first 50 knot gust hits you, you remember the fear!! 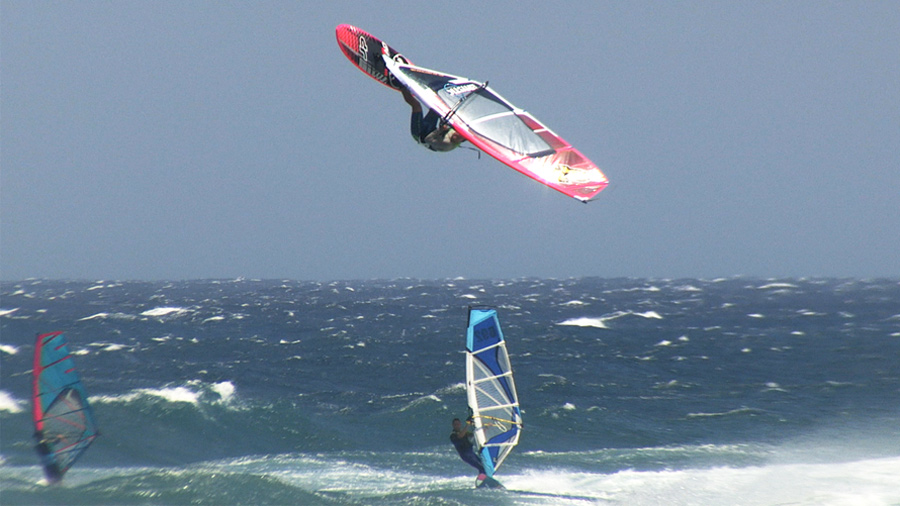 Robby with a huge Backloop

Continentseven: Do you feel ready and prepared for the first 2014 PWA World Cup in July at Pozo Izquierdo?

Graham Ezzy: Prepared? Not yet. But I will be. I’ve got new boards coming and quite a bit of time to train before the PWA starts in July at Pozo. I have a couple new moves that I’m working on, and if I can start making them consistently, I think I’ve got a really good chance of making it to the top. If I try to copy guys like Philip or Victor, I will always be behind. I need to sail in a way that plays to my strengths. I need to be different if I want to win heats.

What do I expect? Nothing. I just want to have fun. Of course I want to pass heats, but I don’t want a heavy expectation sitting on my head. I just want to sail my best. And hopefully that means doing things no one else is doing.

The locals? Dude… They are on fire. I saw Dario do a Goiter and Taka on one wave. And the kids are killing it too. Omar Sanchez looks really solid. And Albert Pijoan had a nice evening session yesterday full of Pushloop Tabletops and Backside 360s. Hell, they are all ripping.

Marcilio Browne: We came here to get some practice and the forecast was looking good. I don’t feel 100 % ready yet, but working on it, heheheheh.

Robby Swift: I feel pretty prepared. I’m sailing better than last year and I was confident last year. My ankle hurts a bit in the morning and the evenings but nothing I can’t deal with. When I’m on the water I don’t think about it, especially with all the adrenaline from these windy conditions. 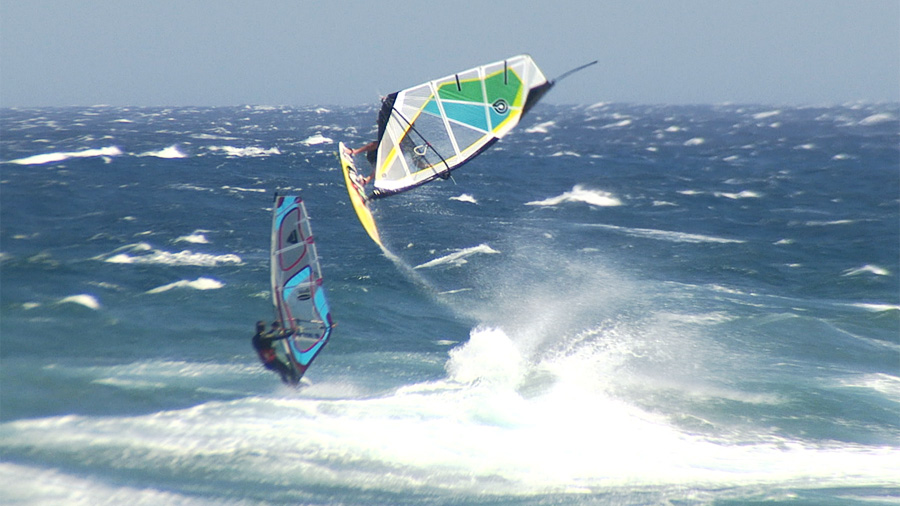 Continentseven: Is it worth to travel from Maui to the Canaries for a week?

Graham Ezzy: I made the Pozo decision the night before I left Maui. The forecast was good and Braw and Swifty had already booked tickets, so I pulled the trigger and jumped on 48 hour journey for a week of Pozo. Is it worth it? Yes. Even after 3 days of sailing, my body hurts. Not muscle pain—that’s easy to deal with or train for. Rather, the tops of my feet are raw from the footstraps (pro tip: a layer of super glue stops these from turning into holes) and my ankles are stiff from jump crashes. I gave myself a black-eye after a bad crash on one of the new moves. Staying for more than a week would be torture. I can’t wait to get back to the easy winds of Maui. If I stay in Pozo too long, I lose the curiosity on the water. A week at a time is perfect.

Robby Swift: Yeah sudden mission to Pozo!! It’s paying off at the moment! Been sailing 3.7 and 3.4 all day every day!! Lots of fun. 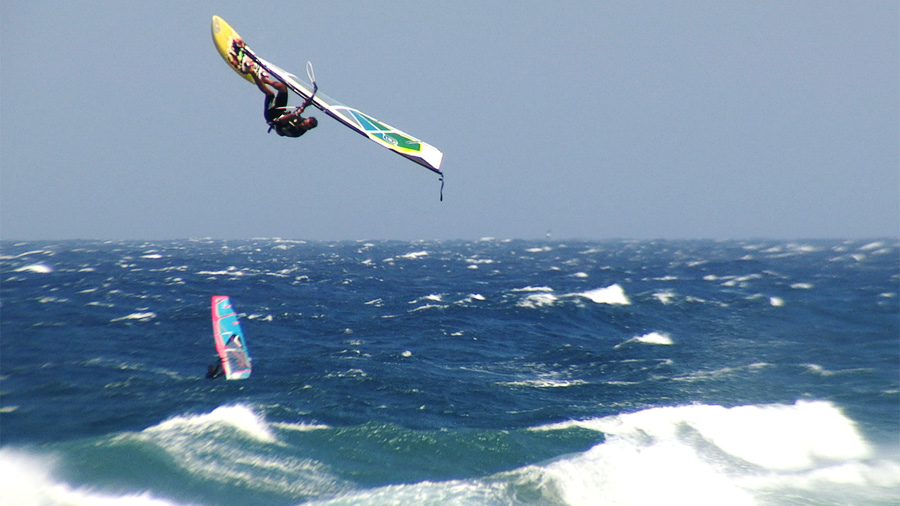 Continentseven:  How did the windsurfing work in windy port tack conditions?

Graham Ezzy: I’ve spent so much time in Pozo that sailing here feels natural. And after my winter in South Africa I didn’t even need much time to adjust. After all, this year I’ve had more Port days than Starboard.

Any instant glue will work. In the past I’ve used all purpose krazy glue. This last trip, I used loctite. The chemical in these glues is cyanoacrylate, which actually has many medical applications too (such as a better alternative to stitches). Though I think it can irritate skin for some people. For me, I wouldn’t be able to sail in pozo without it.

I’d like to know this too, sounds atleast interesting…

what kind of super glue do you mean in order to avoid holes in the skin? Real glue??

super glue is the name of the brand but there other brands working as good as that even over open skin. You can use it also over the palm of your hands to avoid the classic holes when you ve been not sailing much before.

Great! I need to try to this out! I After one or two days of windsurfing I have always whole in my hands. Thank you for the info!