Sebastian Kördel from Aach in Germany has won the 33rd Engadin Surf Marathon. He dominated the worldclass fleet of more than 50 starters from 6 different nations.  He finished the race in the worldclass time of 49 minutes and 30 seconds. 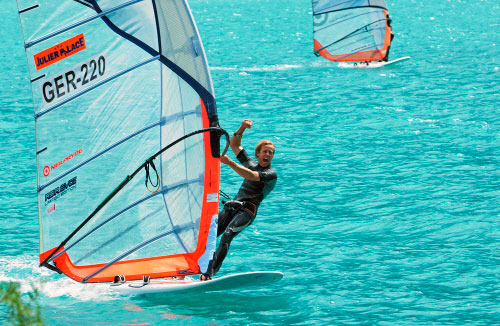 More than 100 athlets showed up and the Maloja wind, which can be quite tricky, guaranteed exciting competitions while the competition days from the 11th till the 15th of August.
The highlight of the this year´s event was definitely the Engadin Windsurfing Marathon, which happened for the 33rd time. The participants had to sail 4 rounds on the Silvaplana lake to get the Marathon distance of 42,195 km done.
Just after 49 minutes and 30 seconds just 19 years old Sebastian Kördel (Ger-220) finished with an incredible average speed of 51,16 km/h, sailing on a production Formula board.
His hardest opponents, Fabian Mattes und Florian Bandel, both are Germans, followed in 2nd and 3rd position and made it on the podium as well. In the ladies class a super happy Carmen Imhof from Bremgarten from Switzerland took the title. It was a close fight with her Swiss opponent Franziska Stauffacher from Wangs.
Dirk Hanel finished as the fastest Kiter 14 minutes behind the German winner of the windsurfing class! 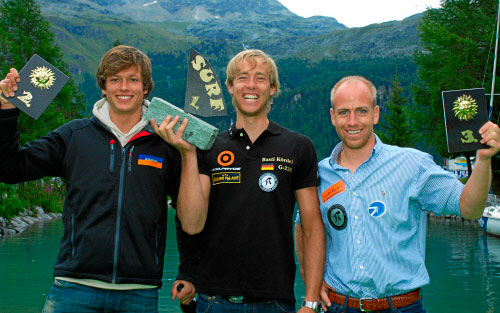 The winners of the Marathon (Pic: swiss-image.ch/Photo by Mark van Swoll).

The spectators also saw 2 worldclass Formula windsurfing races. Both were won by Sebastian Kördel as well, followed by Fabian Mattes, Karl-Heinz Bahmann, Andrea Colombo from Lugano and Dani Aeberli from Erlenbach.
One round of Slalom racing could be finished in fair conditions as well. Sebastian Kördel, a new racing superstar, also dominated the Slalom discipline at the lake Silvaplana, which is located 1790 m above the sealevel. Former freestyler Baptiste Beer and Florian Bandel made it in 2nd and 3rd positions.
In the ladies Slalom class Franziska Stauffacher, the sister of the Swiss Olympic sailar Richard Stauffacher, who did not attend the event, took the victory.
In the juniors class Fabian Schenk from Aadorf grabbed the win. 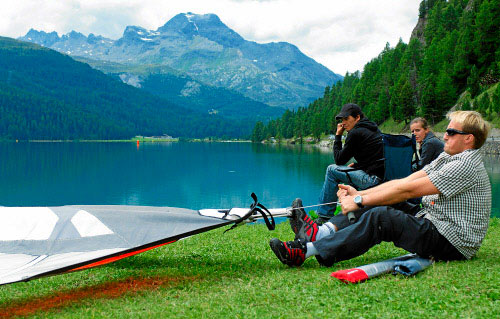