The first competition day on Sal, Cape Verde at the PWA wave final saw no action on the water. In the morning headjudge Duncan Coombs briefed the 31 worldbest riders but later no action on the water followed. The wind had the right direction, but was very light and the swell was not existing. Tomorrow the swell should be from northern direction, which fits better for this island. Normally the best swells are the winterswells from northern to northwestern direction, which start in October and last until the end of April. So, actually it should fit now. Just the wind normally is a bit inconsistent in November. The most consistent months are January till April. So let´s keep the fingers crossed to see better conditions while the upcoming days. 9 days are left to score a big swell. 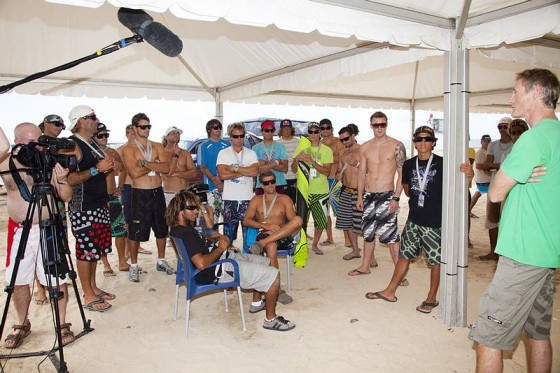 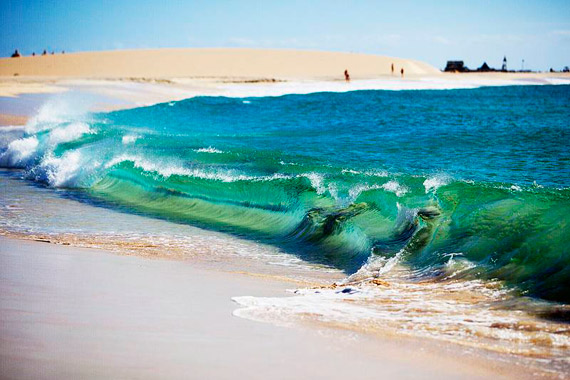 So let´s have a view on the 8 first round heats. Victor Fernandez, the current number 1 ranked PWA wavesailor has no opponent in the first round yet, but will get a local as his opponent.

Some topnames did not make it to Sal, like Gollito Estredo, placed in 19th position after two valid events in 2010, who has problems with his hand. Jonas Ceballos from Gran Canaria, currently ranked number 9, is also missing in the list of the top 32.

Josh Angulo, Sal local will be out in the first heat and battle it out against German down the line expert Klaas Voget, who is in 7th position actually. Thomas Traversa will face French countryman Yann Sorlut: number 14 and Reunion Wave Classic 2010 winner against current number 21 in the PWA ranking.

Heat 2 will see a British battle in between Ross Williams and Jamie Hancock, who are both excellent in riding wave. Plus there will be the Isla Margarita connection: Ricardo Campello vs. Diony Guadagnino to fight for the top 16. Ricardo will give everything. He is ranked in 2nd position in the PWA tour right now and trained on Maui before the event.

In heat 3 last years Sylt winner and currently ranked number 7 Alex Mussolini should make it against Jules Denel, the number 21, who improved a lot while this season. Dany Bruch has to beat his fellow countryman Florian Jung, if he would like to make it in the top 16. Jung prepared himself on Maui.

Heat 4 will see super experienced Dutch Peter Volwater – ranked 25th – against Danish champion Kenneth Danielsen, who has a new website. Kenneth is ranked number 14. In the second duel of this heat multiple wave world champion and Ponta Preta expert Kaui Seadi will compete against one of the oldest participants, Kai Katchedorian. He already is 39 years old, like Jason Polakow! Not an easy one for Kauli. Kai also knows the waves on the island very well. He scored some extreme days already!

Pozo local Dario Ojeda will face Antoine Albeau in heat 5, who was in favour to compete at Sal instead of participate in the Speed Classic back home in France. Dario is definitely the favourite in this heat. Dario is ranked 10th and the Slalom terminator is ranked 26 in the waves. Also in heat 5 is Robby Swift, the number 6 and last years number 3 in waves, who will battle it out against 24 years old Italian Francisco Porcella, who is well known as a worldclass waverider.

Heat 6 will see two heats packed with the strongest youngsters on earth: Kai Lenny, the leader of the 2010 world SUP tour, against John Skye and Philip Köster, current number 3 against Jason Polakow. It will be very interesting, how the young riders will compete against the very experienced sailors. John Skye is 33 years old and Jason Polakow 39!

Kevin Pritchard will put a lot of energy and style in heat 7 to win against British sailor Phil Horrocks, who is on form right now. The second duel will be a fight of Marcilio Browne against Camille Jubon. Marcilio had a unlucky season so far and is ranked 24th. Camille is in 26th position after 2 events.

In the final heat of the first round, the heat number 8, Ben Proffit will have Boujmaa Guilloul as his opponent. Number 14 against number 20. Victor Fernandez chas to wait, who will be his opponent. Like mentioned he will get an opponent out of an qualification of 2 local sailors.